February is usually a pretty poor month for year ticks on patch, and this year is no exception - for me anyway! I've not had any since Pintail and Woodlark on 7th. Today though, another two fell - both 'tricky ones' too.

As the sea was flat I made the most of it, starting with a sea watch from Seaton Hole at 08:00. It was rather quiet, birds on the sea included five Red-throated Divers, eight Great Crested Grebes and eight Common Scoters with a further six Red-throats and three Scoters past. 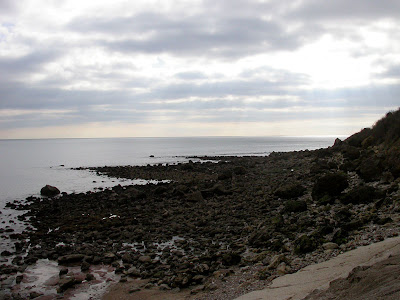 Birder friendly sea - no waves and no bright sunshine!
As it was so birder friendly I tried looking over it from Branscombe too, a site not visited often enough but has in the past produced some superb birds. This proved a very good idea as it was HEAVING with birds!

Most of these birds were Razorbills, over 400 in all - with only four definite Guillemots! Several Kittiwakes were loafing about, the occasional Common Scoter flew past with a group of three landing close in. Red-throated Divers were scattered all over the place - some very close in, I counted 22 but there were probably many more. And then there was the year tick....

This year I reckon I've seen about 250 Red-throated Divers on patch - I've witnessed some impressive movements, but the only other diver I've seen was a single Great Northern east past Seaton on 26th Jan. So - back to today - when a distant larger diver appeared in my scope view sat on the sea I smiled.... when I realised it was a Black-throated Diver I started jumping up and down like Tigger! A patch goodie like this certainly deserved a text frenzy; Ian McLean was the only one to react and enjoyed the bird alongside me. Well chuffed : )

I'll finish the ocean related part of this post with a couple of photos I took at Seaton Hole, it's nice to hear their chattering again from above... 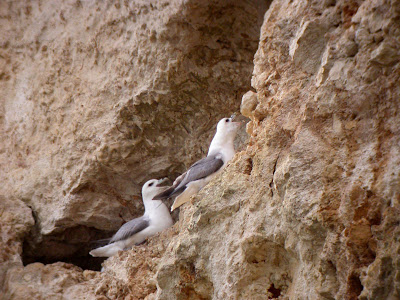 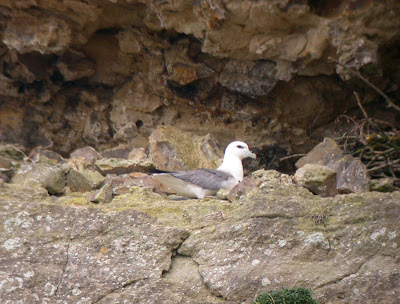 Yes Seaton does have a seabird colony....this is it!
Now to year tick number two...

The saltmarsh north of Coronation Corner seems to be our most reliable site for Jack Snipe, but I've wandered up here on five occasions already this year and have seen naff all. Today I thought I'd give it another go, but with my recent lack of luck here and the current mild weather I thought I'd have no chance. So why did I bother I hear you ask? Over breakfast this morning I was flicking through a few months old copy of Birdwatch, and in it was an article on the ringing of Jack Snipe - including some stunning photos - that was enough to make me try! And how did I get on? Well I wouldn't have written all this drivel if I failed would I?

The saltmarsh was dead quiet, and it wasn't til I got to the western edge that I started flushing birds.... three in fact! The first one was a Snipe, the second a Skylark, and the third... a podgy little Jack Snipe! Result!! It landed just inside the main reedbed, soon followed by another two Common Snipe. Back at the car the pale Iceland Gull played about over the water with a lump of something in its beak, and a look through the small Gulls gave eight adult Meds.

All in all, a pleasant birding day in very pleasant weather. If it stays this mild Sand Martins won't be far away...
Posted by Steve Waite at 18:03