It's been a hectic few work weeks for me, but with a gap in my diary yesterday morning I took the opportunity to take Dad to Axminster to see the lingering Whooper Swan (which is the same bird I had in Colyford in October), and then the Chard Reservoir female-type Smew.

The Whooper Swan was the only swan in the field yesterday (north of the B3261 where the river runs under the road), whereas when I saw it here a week ago it was one of about twelve!  It was nice to see a Green Sandpiper as well, presumably displaced due to the high river levels.

Then it was time for the Smew at Chard Res - and wow what a bird!  It started off distant but took flight and landed in a much closer corner of the Res, where it would sometimes loosely follow groups of Mallards around.  The light was always a bit bright and we were often looking directly into it, but I couldn't believe how close it came!  It's a real corker, and am surprised it's not proving more popular with photographers... 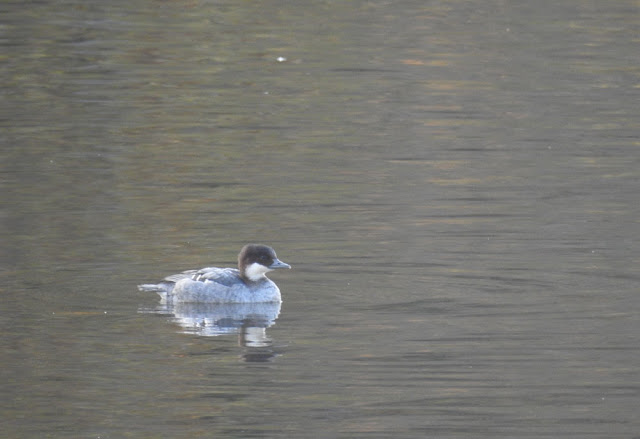 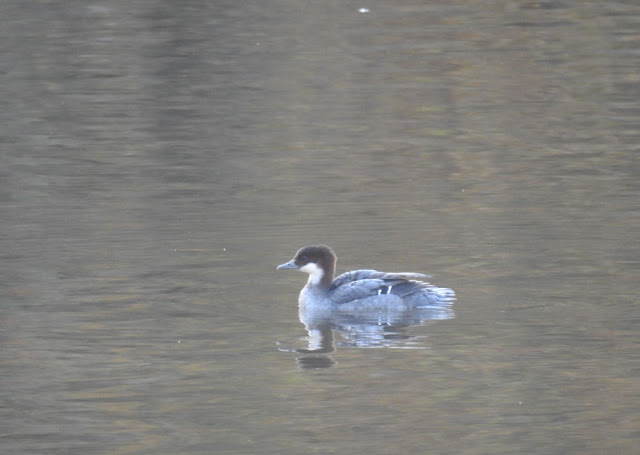 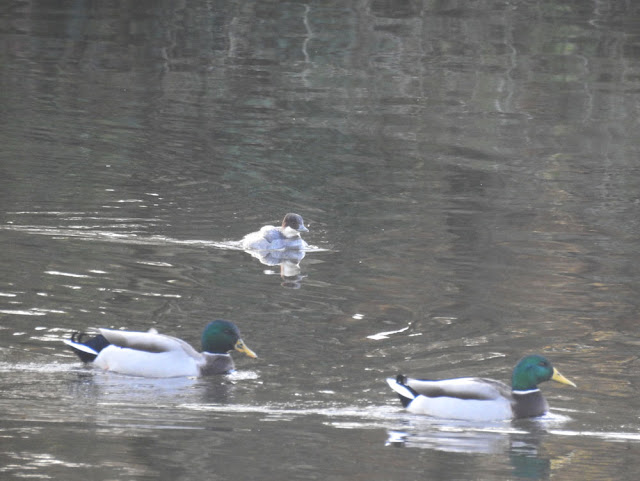 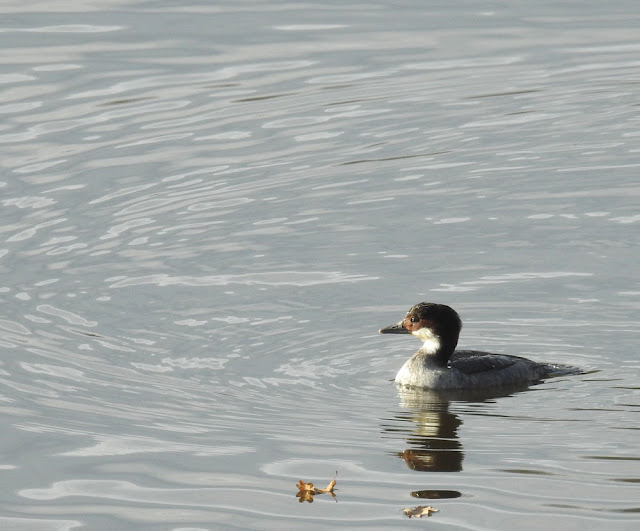 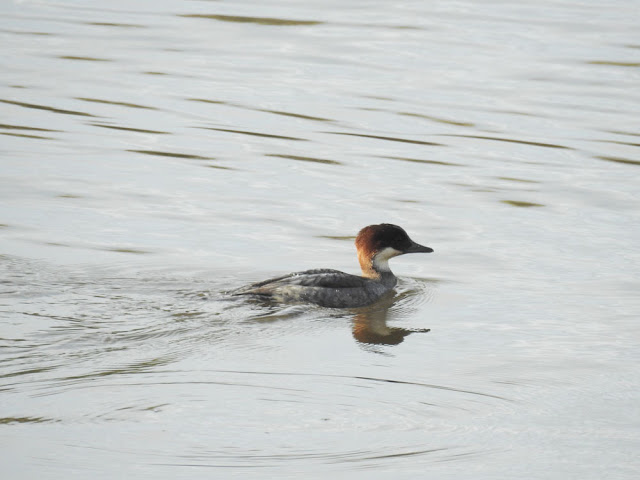 A brilliant bird. My first Smew for many years, and another cracking bird for the Chard area (always a bit gripping considering how close we are to Chard!).

A nice flat sea this morning encouraged me to start my day on Seaton Beach... 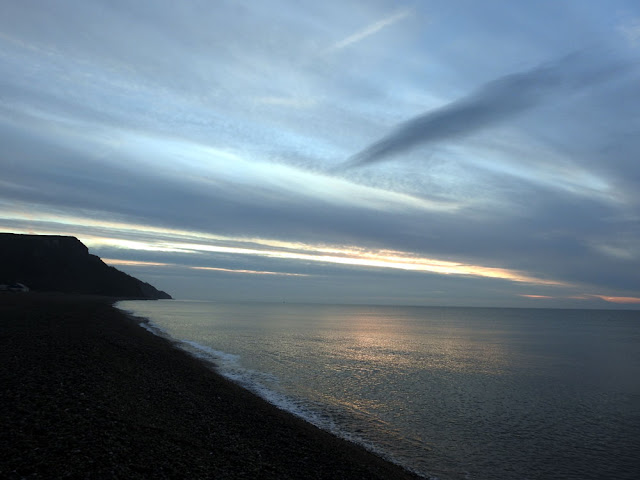 As expected there was next to nothing flying over it, but on it were my first two Great Crested Grebes of the winter and a locally respectable count of eight Red-throated Divers. Unusually six of these divers were really close in, presumably indicating we've got some pretty good feeding conditions close in. Really enjoyed watching them... 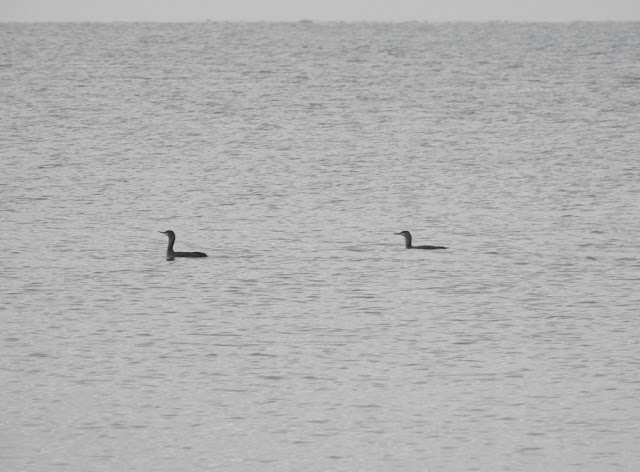 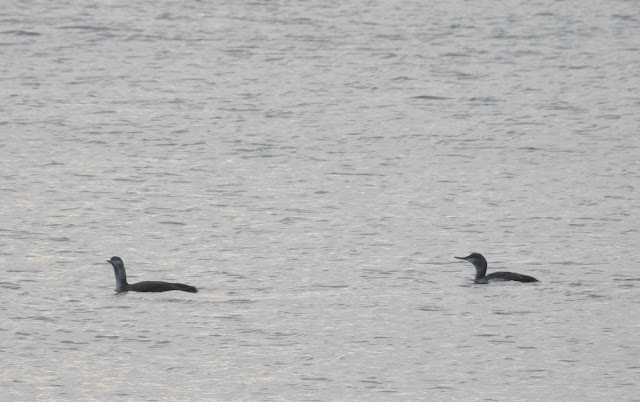 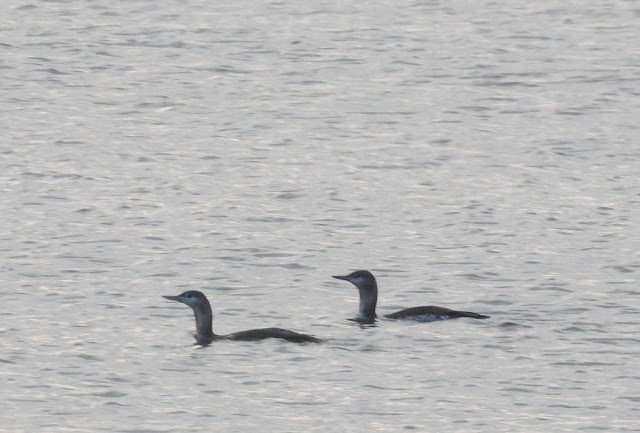 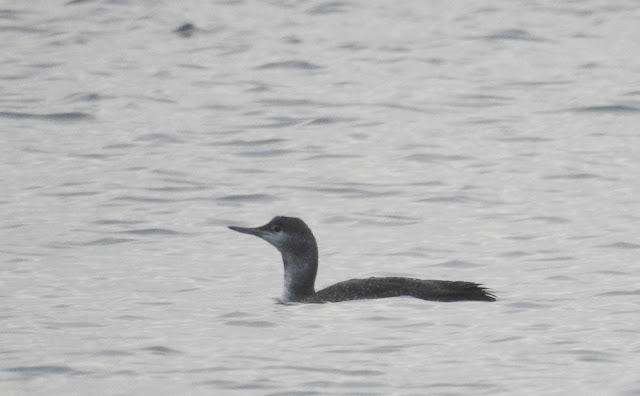 This was followed by a quick look along the Estuary, which showed a single Knot with the roosting Redshank. Another quick look later revealed an Avocet too, another bird that first dropped in yesterday.  I then had just enough time to confirm the continued presence of at least three Water Pipits opposite Colyford WTW (which I continued to photography abysmally!)... 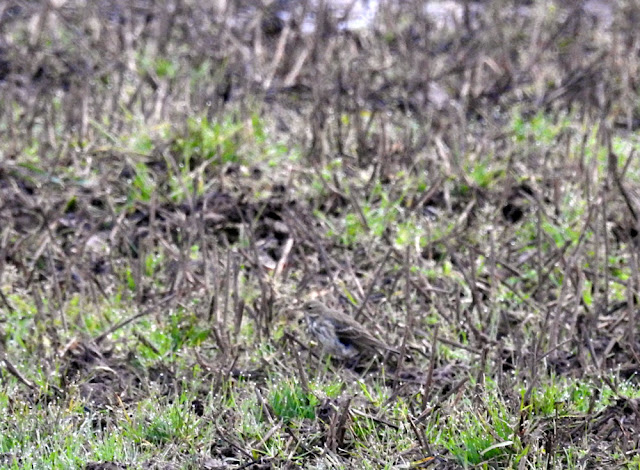 Find of the day however goes to Mike, who turned up an extremely late Whinchat on Beer Head this afternoon.  Can't be far off Devon's latest ever?

The large field opposite Colyford WTW along Cownhayne Lane is looking rather tasty at the moment - it's crammed full of birds!  Seeing them isn't always easy mind...

For a couple of days I've seen a lone Water Pipit feeding just inside the gate during some some fairly brief checks of the site. Today though I had time to set the scope up and spend a decent amount of time here, which revealed a total of (at least) five Water Pipits...

Four of them spent about five minutes feeding around the cattle right inside the gate, with a fifth seen and heard in flight along the southern edge of the field (where there could actually have been many more!).

Watching these birds reminded me very much of early 2005, when a flock of up to twenty Water Pipits were feeding in the field on the opposite side of Cownhayne Lane (just north of the WTW).  Back then Water Pipits were an annual winter visitor for us, but they were usually confined to Colyford Marsh.  That particular winter however I remember they went missing just prior to our New Year's bird race, but a few weeks later Gav stumbled upon them in this field.  It was a real surprise to us as they had always been so site-faithful, and we had never even heard of Water Pipits feeding on arable land before!  What's odd though is history hasn't repeated itself, and as far as I'm aware not a single Water Pipit has been seen in this field since.  Well - until maybe this year as am sure some of these will cross the lane sooner or later.

As well as the Water Pipits today, this field gave; 80 Linnet, 40 Meadow Pipits, 30 Pied Wags, 10 Skylark and a Greenshank that has been feeding in the same muddy puddle for a few days now...

I have always dreamt of finding a Buff-bellied Pipit on patch, and I can't help but think this field will offer me a good a chance as ever. It is though so tricky to get among the birds properly, mostly due to the stubble and crop height, so it's the kind of site you just need to keep checking as often as possible. Finger's crossed... 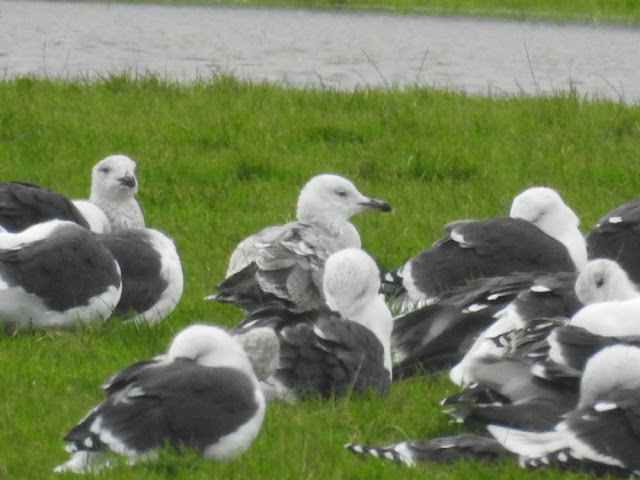 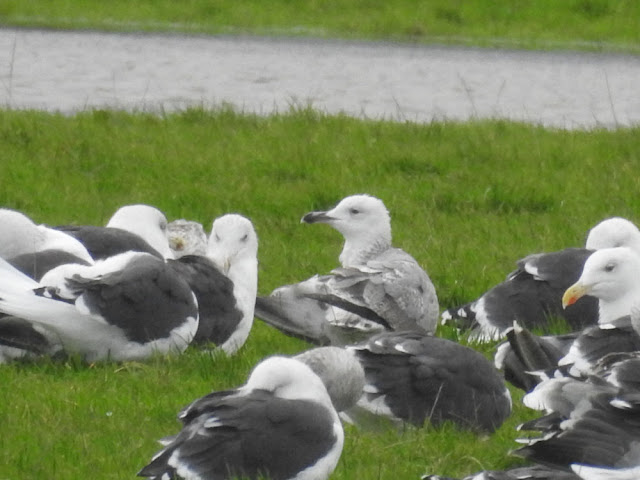 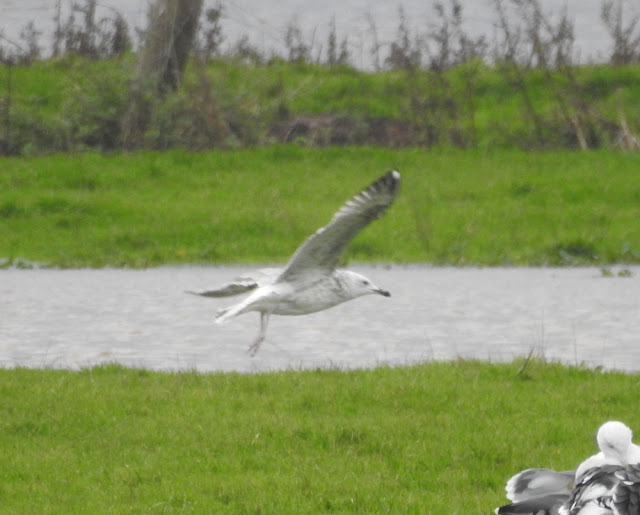 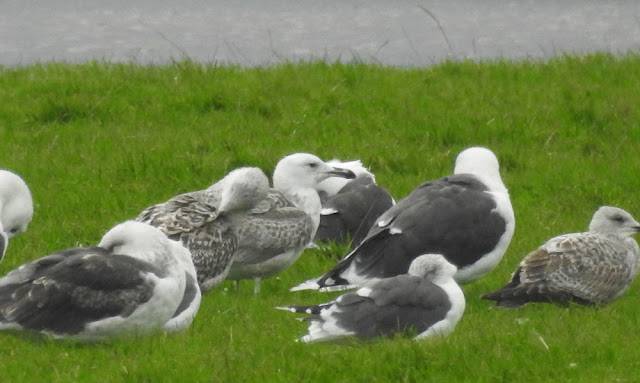 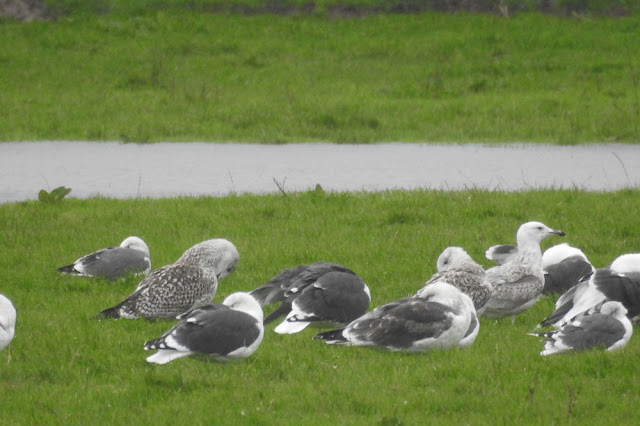 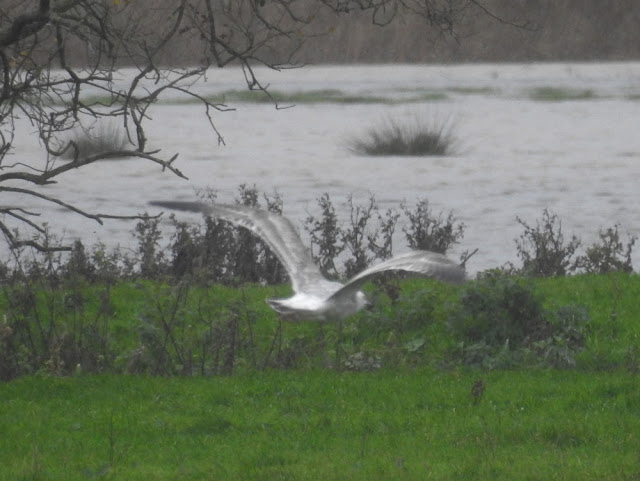 I was keen to get to Axe Yacht Club today due to the ever increasing numbers of Black Redstarts collecting here, I had three yesterday on the houses of Trevelyan Road and Ian Mc reported four this morning.

Gladly I did manage to squeeze in a visit early this afternoon, and saw at least five first-winter Black Reds, although there could have been as many as seven present. One of them was clearly a male showing black around the face and upper breast, a darker mantle, but lacking the white wing panels of an adult.   Mike did see an adult male here half an hour before my arrival, and with Kev's three in Beer this afternoon that makes for an impressive patch day count.  It really is proving a top autumn for this species.

Amazingly though, even though it's November and I was stood on a beach in the middle of a load of boats, this wasn't the only species of Redstart present...


I really was not expecting this!

When a redstart flicked up onto a boat parked up right next to me, I was completely stunned to raise my bins and see exactly just that...a Redstart!  A Common Redstart.  Thoughts of Eastern Black Redstart crept in briefly, as it took me a few views to confirm it's sex as some angles seemed to suggest it had a dark throat and orange breast. When it showed better however I just imagined I was stood on Beer Head in early September looking into a bush... yup that's a female Common Redstart...


When feeding among the boats it behaved just like all the Black Redstarts around.  But did differ in that its darker relatives would often fly up to the roofs of the houses along Trevelyan Road, whereas the Common didn't do that once. Despite some really close views, it often proved quite elusive - frequently dropping down below the boats and not showing for several minutes at a time.

This is my first ever November Common Redstart, and of course the late date could well suggest she's originated from somewhere further east than our usual passage Redstarts.  But unless she stays for a few days and I manage to somehow collect a DNA sample, we will never know where she's come from or what race she belongs too.

The only other birding time I've managed today was the first hour of light which I spent hunting down Long-tailed Tit flocks with a Pallas's prize in mind. I couldn't even dig out a Yellow-browed or a Firecrest for my troubles, in fact if things don't change soon this will prove my first Yellow-browed-less autumn on patch since 2012!