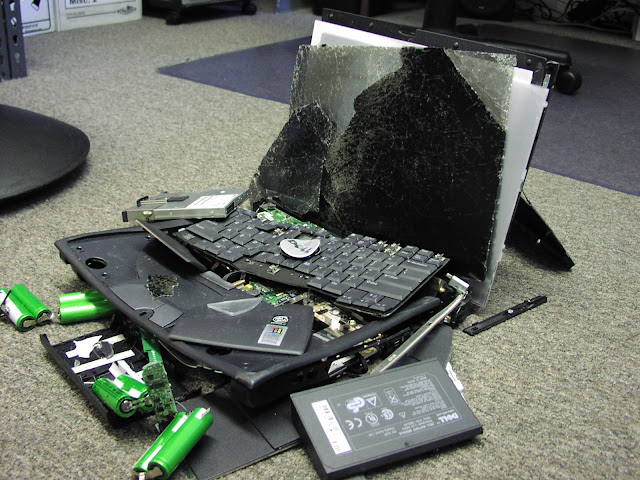 Well this isn't exactly how my laptop looks, but it may as well. It had been in Computer A&E all of last week, but it was on Friday I got the sickening news...

It was dead, and not just any old dead, it was hard drive dead - the worst dead possible. So not only do I now not own a laptop, but it took all the data down with it. The only slight positive about all this is the computer geeks didn't charge for any of the work they did, no fix no fee. I still have to pay for a new machine though!

So all in all last week was not a good week.
Posted by Steve Waite at 11:34 No comments:

Can't See The Trees For The Woods!!!

Just occasionally a birding event occurs that is quite simply mind blowing. However much your mind goes over it, you just can't get over it. And today that happened...

There's been three Wood Sandpipers on Black Hole Marsh for a few days now (there were five).  Sometime last night/this morning another 31 dropped in!!!!!  34 Wood Sands is just completely nuts, and not a number anyone would ever dream about seeing, certainly not in Devon, and probably not anywhere in the UK.  Wood Sands only ever come in ones, twos or threes, sometimes if your lucky six and once before in Devon ten (six was my previous highest here).

They were all juvs, and although spread out across the whole marsh (making counting very hard!), many were showing at point blank range from the Island Hide...

What I found even more nuts about this influx was that no other species were involved.  There were plenty of other birds on Black Hole Marsh (one Little Stint, two Green Sands, eight Ruff, lots of Dunlin and Ringed Plover) but all have been present for a day or so already.

This Wood Sand influx has been witnessed right across the UK, although no other site has had more than 20 birds. I've read about 19 somewhere, along with a few other double figure counts, and smaller numbers dotted about all over.

Butterflies are the last thing on my mind at the moment as I sit in my house with rain beating down on the windows and neighbouring trees swaying in the wind.  But there has been some sunshine over the last week and I've not just been looking up...

I wanted to see if there were any Chalkhill Blues hanging on in the corner of the patch, but sadly I couldn't find any so I think the answer is no.  There were lots of Common Blue, one Holly Blue, and highlights in the form of three Wood White and several Dingy Skipper...


I've also been trying to locate Brown Hairstreak at a local site where one was reportedly photographed last year.  Nothing yet, but it is still early days!

Could Have Been Bad But It Was Baird's

Saturday I took Jess out for the day, a delayed birthday present (only three months late!). But right at the start of the day Phil phoned with news of a long-winged wader on Black Hole Marsh, either Baird's or White-rumped.  I don't need White-rumped for the patch so spent the next few hours hoping it was going to be another of these, but the bad news came early afternoon just as I was munching on a pork and apple pasty (which in my opinion was over seasoned, good meat should be left alone).

Thankfully though it did the decent thing, and when I returned home late afternoon a quick run to Black Hole (where for the first time I could really appreciate the recently tarmacked track to the Island Hide!) showed it was still present, and one of the closest waders to the hide.  Many thanks to Kev and Debs for letting me use their scope. Although there are heaps of staggering photos out there of it, I still had to get my own record shots... 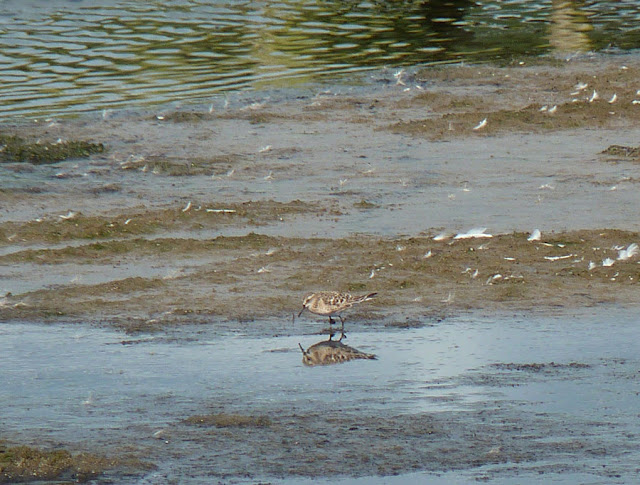 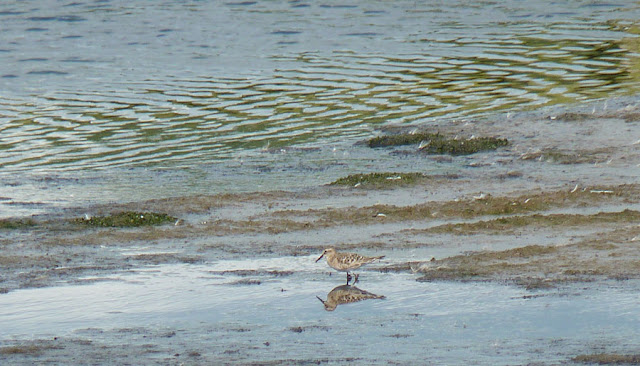 I've never seen an adult Baird's before, but several juvs/1st winters. Whatever the age though that shape never changes, the long tapered wing tip of this species and White-rumped Sand is classic.  I thought it was actually a very pretty bird, very gingery overall with a gorgeous almost juv Curlew Sand-like peachy wash to the breast, and a very striking head pattern. I've always likened Baird's Sandpipers to weetabix, I hope Tim White doesn't mind me nicking one of his awesome photos from his website (http://timwhitewildlife.blogspot.co.uk/)... 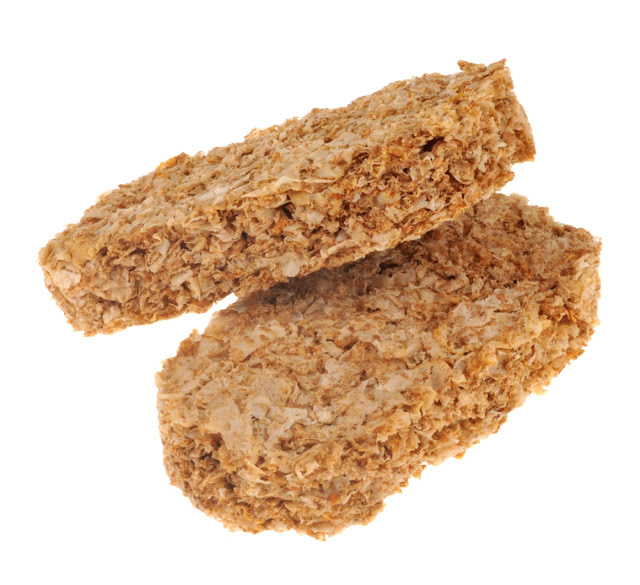 Don't tell me you can't see it!? I will admit it is more obvious with the juvs.

A cracking bird for the marsh, and a great patch tick too.  I appreciated this one more than most because I (along with three others) have seen Baird's Sand on patch before, many many years ago though. I must have been about 14 and it was settled north of Coronation Corner late evening, but soon took off and flew out to sea. Oddly I have never forgotten the late Alan Bundy describing its call as "more like a fart than a bird call".  Sadly enough wasn't seen for the record to be accepted by BBRC, and I play by the books so it wasn't on my patch list. Well, it is now :-).

Black Hole has been superb during the last week, just this morning there were four Wood Sands on it, and last night Tim White had nine Ruff. On top of that there's been up to 50 Dunlin, 30 Ringed Plover, small numbers of Greenshank, Green Sands, a few more Common Sands, singles of Turnstone and Sanderling along with a few hundred Black-headed Gulls and double figures of Teal. What a place!

Enjoyed a superb ringing session yesterday morning with 43 birds trapped at Lower Bruckland Ponds.  I never knew this place was such a fuel station for migrating passerines, but clearly it is.  As ever with ringing I wouldn't have had a clue half these birds were there without the nets. The more ringing I do the more I realise field counts are way off the mark, especially when it comes to migration.

It was mostly Warblers; 11 Chiffchaff, six Willow Warbler, one Blackcap, one Whitethroat, one Sedge Warbler and best of all a Garden Warbler.  Garden Warblers are scarce around here, so it was a complete surprise!

This is only the second Garden Warbler I've ever handled (the other a spring bird) so am not experienced in ageing them. In fact I thought it was a 3 (this years young) at first, until I looked closer at its eyes...

Another look at the tail showed that although the feathers were quite pointy tipped, they're broad and abraded...

The main reason why I thought it was an young bird was because of that darker and obviously fresher central tail feather.  Many first-year passerines moult the odd or a few tail feathers during their post juvenile moult, which is what I thought had happened here - but other features make this an adult bird so that can't be the case!?  Also look at the middle tertial at the top of the photo, that's another darker and newer feather.  I keep looking at the other central tail feather too because to me that looks almost like a juvenile feather, much browner and narrower than the rest of the tail. Could this be a '5' (born last year) that failed to moult its two central tail feathers in Africa during the winter, but has since replaced one of them!?

I really hope someone experienced with the moult cycle of Garden Warblers reads this and gives me their thoughts. I am probably way of the mark but surely it can't be a younger bird with an iris that colour and so much wear on the feathers??

Thankfully having handled many ten's of Sedge Warblers it was easy to age this bird as an adult (age code 4)...

Friday of last week was a lovely day, with plenty of sunshine and not a breath of wind.  And it was nice to finally see some autumn passerine migration...

Over Lower Bruckland Ponds several large flocks of hirundines flew west, along with a few Swifts and my first Tree Pipit of the autumn.  In the bushes were several Willow Warblers, Reed Warblers, a Whitethroat and a Marsh Tit - the latter being my first for the Ponds.

I was really pleased to finally catch Kingfisher here too, two of them in fact...

Seeing as this whole post has been about Lower Bruckland Ponds, I must just point you towards the Lower Bruckland Ponds website.  You'll see my monthly updates here that summarise how the wildlife of the ponds changes as the year progresses: http://www.natureindevon.co.uk/
Posted by Steve Waite at 08:26 No comments: