Who's Nicked Our Swans?

Today I checked every Swan in the Axe Valley from Seaton beach up to the Axminster by-pass just north of Kilmington....they were ALL Mutes! That's buggered up a few new year listers plans I guess....

I started today in Exeter, wandering around a piece of land I've not surveyed for a couple of years. Nothing mega but a nice Brambling and a few Reed Buntings made it rather pleasant. I was home a little after 10am.

Although the valley didn't give me any decent Swans, it did give me a cracking pair of Pintail. They were on Bridge Marsh late morning, but late this afternoon I saw them fly south down the river. Nice to see a smart male for a change, just wish it was closer.... 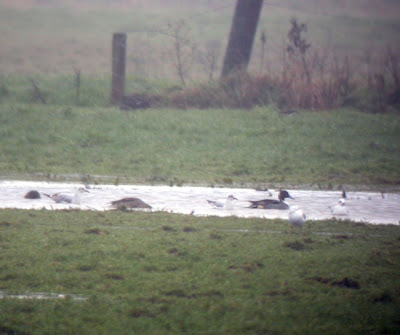 A lot closer!!!!
Two adult Med Gulls were on the estuary late on, but grilling the Gulls produced nothing more. Couldn't see the family party of five Brent Geese today which have been in fields to the north of Seaton Marshes for the past week or so.
Posted by Steve Waite at 18:06 No comments:

I Am Still Here!

The build up to Christmas is always a horrible time at work - and this year proved no different!! I worked the two weeks up to Christmas without even a half-day off, lucky me! This meant I had no birding time, as any non-work time I did have I had to get on with Crimbo preparations. Hence why no blog posts.

I was very gripped to miss our second Caspian Gull, but very pleased to cash in on the Bewick's Swan. It wasn't until today that I have got round to getting some snaps of it though... 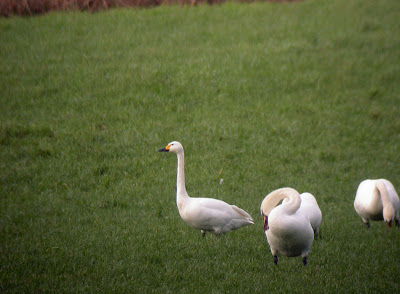 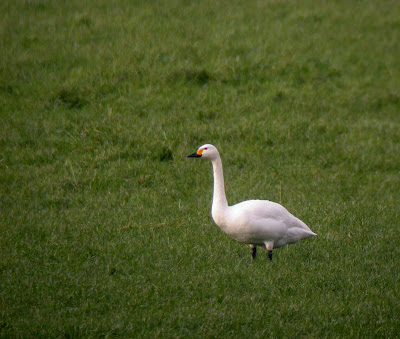 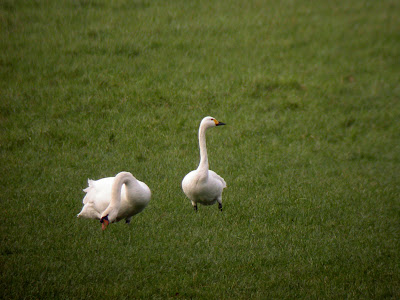 I LOVE wild Swans....so to have both species in one flock is just BRILLIANT!!!
I couldn't get a pici of the four swan species in one frame, so went for a video to capture them all instead....

The only other birdie news I have to offer is of loads of Golden Plovers alongside the A3052 on Christmas Day morning; at least three flocks were in roadside fields between Tower Services and the Hontion turn-off.

The highlight of my prezies (aside the smellys, chocs, socks, pants, etc....) is the totally brilliant BWPi I now own! What a MASS of info!

Finally I'd like to wish all blog readers a late and belated HAPPY CHRISTMAS :-)
Posted by Steve Waite at 22:51 No comments:

After spending most the day Christmas shopping, I was well up for some birding from mid afternoon. As the sea was rather flat that was where I looked first.

Beer was poor with just four Common Scoters, a Teal and a Great Crested Grebe.

Seaton Hole was miles better. 230 Wigeon were sat in a raft off the river mouth with eight Shoveler. Singles of Red-throated Diver, Great Crested Grebe and Common Scoter were diving in the bay, but the big treat came when I was scoping west towards Beer.

A small Grebe appeared in the middle of my view, I zoomed in and was ecstatic to see it was a Black-necked Grebe! By far the rarest of the Grebes on patch, and the recent records have all been very brief. This was my third for the patch, but I know of another local lister who is yet to see one here....

Ian M, Bun and Karen soon joined me but it had quickly drifted much further out....giving Karen a right conundrum!! Am pleased to say they all got on it though, I hope it sticks for everyone else to see.

After this a look along the estuary revealed something which had been a bit of rarity so far this winter, a Med Gull! They have just been so scarce, weirdly so! The light was crap but I had to take a snap.... 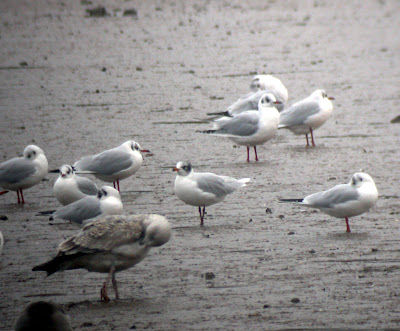 Unbelievably my first one this month!!!
....then it got dark!

Today was my last day off before Christmas, how rubbish!
Posted by Steve Waite at 17:39 No comments:

There was one mega highlight for me this morning, a ringing tick in the form of this.... 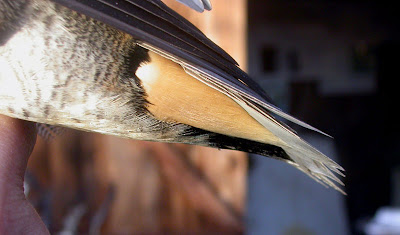 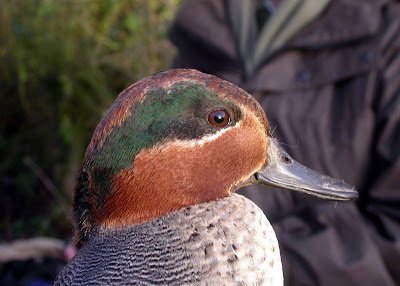 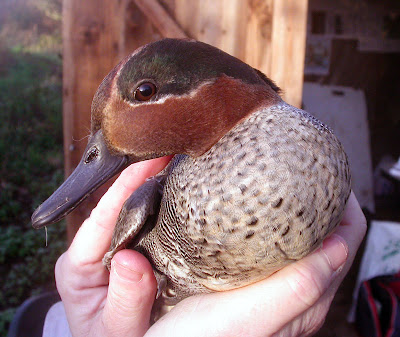 And again! Lovely :-)
It was a very enjoyable outing, not only was there a steady trickle of birds to ring, I also had some great views of Water Pipit.

Most importantly though, I had the oppotunity to stuff my face full of mince pies and other Christmas-related cakey things....then there was the stilton and crackers (yes, how posh!!!) and home made sausage rolls. This was all washed down nicely with two glasses of VERY lovely Mulled Wine. Now that's MY kind of ringing outing!!! :-)

Finally I have a couple of recent bird sightings to mention.... nothing earth shattering though! On Tuesday morning the lone drake Gadwall was floating on the estuary by the tram shed and a lone Brent Goose was sat on the sea with the Wigeon flock. I saw four female-type Black Reds on Beer beach on both Tuesday and Wednesday morning.
Posted by Steve Waite at 17:31 2 comments:

'If Only It Were October'

I said this on more than one occasion today.... mind you August/September would do also!

There were more strong south westerlies blowing all last night and for most of today.... just a bloody shame it's December!! Mind you, if there had been more northerlies before today I guess Little Auks would have been on the cards...

A sea watch from Beer 08:30 - 09:45 produced: 3 Brent Geese, 63 Gannet, 67 Kittiwakes and stacks of Fulmars. The latter were both passing through and lingering so I didn't even attempt to count them. On the sea were two Great Crested Grebes and plenty of Common Scoters. I can't wait for the sea to flatten out so we can give this ever-growing scoter flock a darn good grilling... we could do with a Black Scoter.

Again the estuary - albeit it well and truly flooded - produced nothing. Great news with the Black Swans though!

When they first turned up they kept themselves to themselves, not mingling with any of the 'more usual' white ones, this made some people (including me I have to say) a little sceptical about their origin. Well that was until today, they were in the Mute flock opposite Stedcombe this morning. Look.... 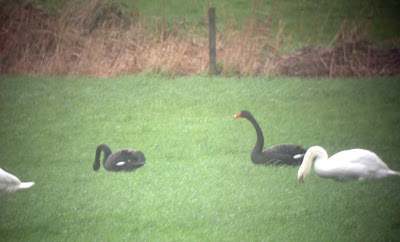 Wow - don't they look so much more wild!
All we need now is for them to start mingling with the two Whooper Swans....then we are really on a winner!!!

Finally I've also seen five Black Redstarts today, all female-types. A single bird near the Yacht Club and four together on Beer Beach; at least one of these looked like a young male.
Posted by Steve Waite at 17:05 No comments: 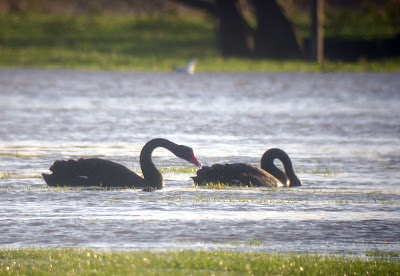 Evening update: I've just put the bins out and a flock of Wigeon called from the nights sky above. Not sure which way they were flying but it sounded like there was quite a few of them.... movement!!! Could well be a garden tick too : )
Posted by Steve Waite at 16:29 No comments: