I've not got too much to tell of last week, due to two days of illness, two mornings of superb Dartmoor surveying and only about three hours of patch birding.

I had high hopes for Monday, but all I managed to squeeze out of the patch was a Hobby west over Bridge Marsh and this brief Greylag Goose with the Mute Swan flock there...

Wednesday was spent on the moor, but I did have a spare ten minutes to look along the Estuary between this and work, and wow - it showed that Wednesday was a good day!  The heavy rain, fog and light SE wind had obviously encouraged waders to move about (and ground) - I was stunned to see a single flock of 90 Dunlin and 7 Ringed Plover on the Estuary.  Numbers like this are usual in the autumn on the Estuary, but only very rarely occur in spring, there has to be the right weather conditions. Although they were just Dunlin (I was disappointed there wasn't a smart Broad-billed Sandpiper in with them yes) they were great to see due to the incredible variation between birds.  All were in summer plumage, but the mantle colours varied from almost Curlew Sand-red to winter Sanderling-grey, and everything in between!  Overall size varied too, as did bill length, so the flock probably consisted of all of the regular occurring UK races; arctica, schinzii and alpina. I just wish I took some photos.

I find May wader days so so exciting - the 'rareometer' levels are sky high and there is so much potential.  Richard P managed to capture the magic with some footage from Charmouth the same morning, he had a single flock of 70 Dunlin, 25 Sanderling and 10 Ringed Plover, and he doesn't even have a river (well not a proper one anyway!). See HERE.

The following day was a bit of a let down, it was still misty and wet but the waders were just not moving - 11 Dunlin and three Ringed Plover were all the beach had to offer.  I did see a larger flock of small waders on Colyford scrape at high tide (about 40+ birds) but THE MOST frustrating thing happened...  I decided they were definitely worth a trudge out to Colyford hide, despite the rain the possibility of something like a male Kentish Plover made it a no-brainer.... Sadly though half way across Colyford Common I flushed a Peregrine off the marsh, which proceeded to fly across the tramline and straight over the scrape.  I heard a few Ringed Plover calls and when I made it to the hide there was nothing there at all... Arse.

And that's about it.  I'll end this post with a short video from Dartmoor, one of the perks of the early mornings and miles of walking...

May is my favourite month for sea watching without a doubt. Everything is in fresh spring plumage and the variety of what can fly past is as good as it gets (skuas, terns, shearwaters, divers, wildfowl, waders, etc) and we often do get a good blow at some point during the month.  I love it!

But this can cause problems....  Birders know just how painful it can be when you are tied up with 'daily life' and there is a bird or are birds you want to see. It could be a rare, a movement or fall and you're stuck at work/in the middle of a shopping trip/have the kids for the day - I'm sure we've all been there. Now I'm very lucky, first of all Jess is very understanding, and has now learned it is always best for everyone if I just go.  But I am sensible about it, and I can cope with missing most things now except for 1/ a patch tick and 2/ may sea watching.  Although with sea watching you can kind of predict what you are going to see, there is just something so magic about watching birds migrating over the sea as they head to their breeding grounds. I find it so SO hard to leave/ignore a busy spring sea.

So although I have had much better May sea watches, there was a real nice variety and some decent movement.  The skuas were the first one's I've seen on patch for almost 18 months (missed the few we had last year) and the Dunlin movement was really quite spectacular. It's just a pity there wasn't a bit more rain about because then the waders would have come on to the beach and up the river valley instead of just passing.

I didn't manage to video any of the real goodies, but here's the Brents, a Whimbrel and a Fulmar...


The relatively new phenomenon that is the spring Pale-bellied Brent migration is fantastic. We don't get flocks of geese down here in this small valley, so it is about as 'Norfolk' as birding can get for us. The flock past the sea front was great, but I had an even better sight that evening...

The girls and I were enjoying a wander around Lyme Regis, and just after we arrived I noticed on twitter a flock of c60 Pale-bellied Brents were flying around over Weymouth (Julian Thomas) and then flew west through Portland Harbour. I knew they were coming so kept one eye on the sea, but I actually nearly missed them because of this....  They left west from Weymouth at 17:13 and at 18:05 I was suddenly aware of Brents calling. I turned around and was greeted with the beautiful sight and sound of 70 Pale-bellied Brents flying rapidly west between us (on the end of the Cobb) and the town. It's a short clip, but just listen to that sound!! (and not my wife asking if it's a ship or a boat!)... 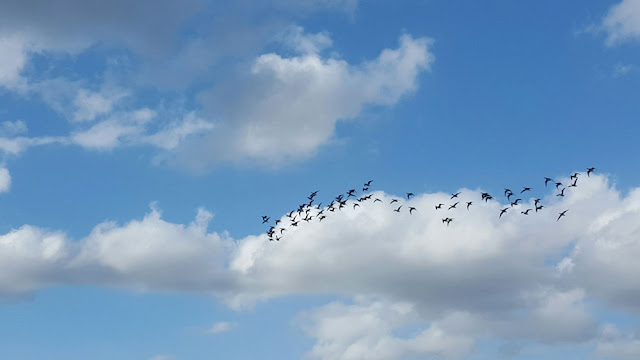 A quick calculation indicates they were traveling at about 28mph - love being able to work things like this out! I fired off a quick text to let the other patch birders know that there were heading for Seaton, and Tim Wright managed to make it down to the sea front just in time to see them/some of them pass by.

I would really love to know where these Brents come from, maybe Holland or France?  They only seem to appear at around Portland, fly west along our part of the coast then always seem to settle on the Exe Estuary for the rest of that day.  It is such a predictable passage now that it clearly is a movement of birds from a regular wintering site to their breeding grounds, presumably in Canada. AMAZING!

Isn't the weather looking promising for the next week. Not for sea watching, but it's looking good for some rare herons, warblers, maybe something better... and surely a tan!?