It's been good to spend a bit more time out today, and I'll start with the birds.  A mid morning visit to Black Hole Marsh was timed exceedingly well, as Ian Mc had just found a Wood Sand...


I've had a look back through my blog and notes, and am pretty sure this is my first every June Wood Sand on the Axe.  We don't usually see the first returning autumn ones until mid July at the earliest, and all spring birds have been in April and May.  Not only is it the earliest, but it's the least worn adult I've seen too - still in pretty much full breeding plumage. So so different to the pale brown juvs we see in August, nice.

A little later an enjoyable tram ride showed additions in the form of a Greylag Goose on the Estuary and a Lesser Whitethroat singing at the north end of Colyford Common.

I also found time for some dragonflying this afternoon, which was nice because during the last month weather and work has not allowed for much of this.  I spent an hour and a half at Lower Bruckland Ponds dreaming of finding a Vagrant Emperor (been an influx of these to the east coast), so when I spotted a mostly brown Emperor with blue restricted to segment two I thought I'd only gone and done it....but not quite!  I soon realised it was a male Lesser Emperor, still a cracking insect and a really exciting find, but I can't help by feeling just a little short-changed!

This is the fourth male Lesser Emperor I've found here (16th July 2006, 10th Aug 2012 and 19th June 2017) but easily the most enjoyable, because it was actually showing well. Hence why for the first time I actually managed to get photographs!  The other three were all brief flybys with Emperors in hot pursuit, but this one seemed to have found its own territory and spent the half-hour I was there patrolling - I even watched it fly up and pluck a Common Blue out of the air before feasting on it.  Amazing!

Other Odonta on show included my first couple of Small Red-eyed Damselflies of the year, at least 16 Scarce Chaser (one female), eight Four-spotted Chasers and excellent numbers of the other usual species.  This is such a great dragonfly site.

Now I know I have posted plenty of Scarce Chaser photos on this blog before, but as they are one of my favourites I just can't help but post a few more...


What a top late summer day!

A rare tern to the left of me, another to the right, here I am stuck in the middle with Moths...

...but not really stuck at all, because it was an absolute joy to dust off one my moth traps a couple of nights ago.  I have Fran to thank for that, whose interest in learning what moths were/are using her garden was all the encouragement I needed!
One Skinner trap was run all night on the evening of 25th/26th,  and although I was distinctly rusty it was great going through the egg boxes again.  I didn't have time to give the micros, pugs and minors a proper look, but the rest of the macros were made up of 184 moths of 32 species.  A very respectable catch and a credit to Frans back garden!
My highlight was the Lime Hawkmoth, I've only caught a couple of these in Seaton in the past...

And an L-album Wainscot was nice to see, a south coast special...

Was great just seeing some of the common ones again too...

Moths aren't the only insects causing me recent glee... the huge invasion of Painted Ladies is just incredible!  Not seen numbers like this for years...

I have been birding quite a bit lately, with the main aim of finding a patch Quail.  Not had any luck yet but I did stumble upon a churring Nightjar at a new site a couple of night's ago which is great news, and the fields between Axmouth and Rousdon seem to be home to more Yellowhammers than ever!

I will not give up with the Quail hunt though, this year has to be our year!

Whilst with the family in Lyme Regis this afternoon I was surprised to get a message from (no longer) 'Midland's Mike' telling me of a Glossy Ibis on the Estuary from Tower Hide.  It was first found by visiting birders mid afternoon.  A surprise turn up in June, most new Glossy's tend to appear in mid-late autumn on the Axe.

I didn't see it until late this evening, and wasn't able to get round to the Tower Hide so my views looked a lot like this... 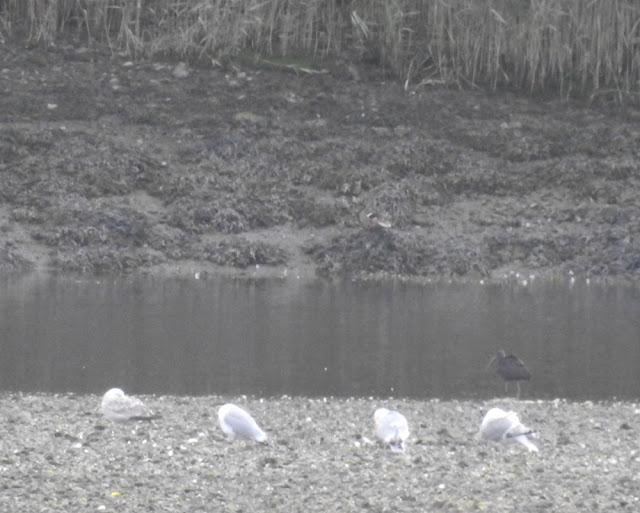 Would have been point-blank from the hide!

Although this is my 29th Glossy Ibis on patch - frustratingly I am yet to find one!  I was nowhere near finding this one as my birding levels have been woefully low this spring, but hopefully one day I'll pick one up dropping in somewhere. I presume enough years down the line they won't be rare at all, so am sure it's just a matter of time...

Enjoyed a wonderful evening with the local Nightjars last night.  They weren't especially vocal but offered amazing views along the main track from 21:40.  I saw two males and one female, which is pretty much the norm for this relatively new site...

Hope the nights warm up for them soon!