I've had lots of laptop work to do lately, so have had the net up it the front garden quite a bit over the past week.It's been really interesting, no unusual birds, just some interesting observations.Throughout the winter, when I caught a Robin it was always a bird that I first ringed in the garden in Sept '11. But within the last week I have caught three new Robins, which certainly indicates movement - whether it be just local or more long range?Throughout last late summer/autumn, I was amazed at the numbers of Bullfinches I was catching. On 26th Dec 2011 I caught my 30th Bullfinch in the garden. Since then, any Bullfinch I've caught has been a retrap. Well that was until two days ago, when I caught two new unringed Bullfinches (so that's 32!). Including this stunning adult male... 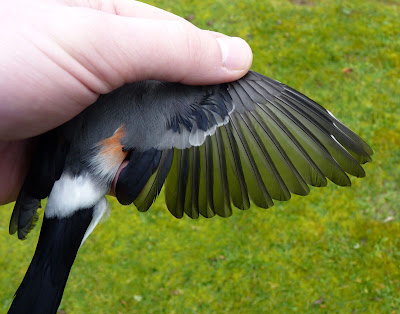 The wing of a 6M Bullfinch
Blackcaps have totally dried up now. Since 27th January the only Blackcaps I've seen in the garden, or caught have been ringed. But before that (and after 22nd November) I ringed 15 Blackcaps. Pretty impressive I think!
Posted by Steve Waite at 14:55 No comments:

'A Guide In The Hide'

I put my name forward to be a 'guide in a hide' this afternoon for the EDDC. They arranged that each hide had an 'on hand expert' throughout today, it was some kind of 'meet the birds' day.I was in the Colyford Common hide 2-4pm, and within that time had just one punter!At first it looked like it was going to be a quiet one bird wise too, but by the end of it I had notched 47 species - all from within the confines of the hide. Not bad really!The highlights were two Ruff on the scrape with Lapwing, a Green Sandpiper on the small scrape in front of the hide, a Cetti's Warbler calling from scrub in front of the hide and three Rock Pipits on the Common (including one very pale breasted, grey headed littoralis-type). Also a single flock of 18 Buzzard circling high above the valley was rather impressive. 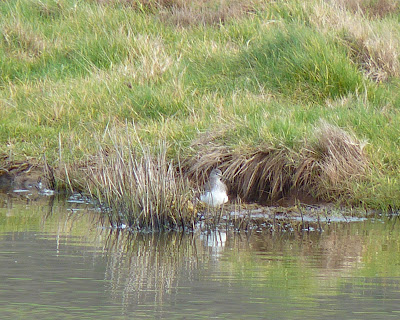 Green Sandpiper - the first one I've seen this year
Birds I could/should have seen, but didn't, included Little Grebe, Cormorant, Oystercatcher, Med Gull, Kestrel, Song Thrush, Stock Dove, Great Tit, oh and Caspian Gull!!!Within the last two nights I've seen three Barn Owls on patch, which is pretty good going! One last night on the old Sidmouth road just west of Colyton, and two tonight, one between Colyton and Southleigh, and another over the pig fields by the A3052 just west of the Esso garage.
Posted by Steve Waite at 21:55 No comments:

Had a text from Bun soon after midday, to inform me of an Iceland Gull on the Estuary. So naturally, I went straight to it!!What a cracking bird, a real white one too! As you can see from the pics it's a nice second winter bird (my first of this age here!), and is surely the same bird that was seen here two weeks ago by one lucky visiting birder - that was also a very white second winter. Just makes you wonder where it has been for all this time! Anyway.... 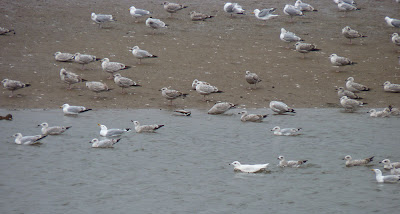 If you can't find it you need to go to Specsavers! 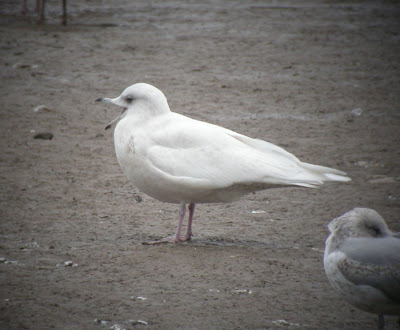 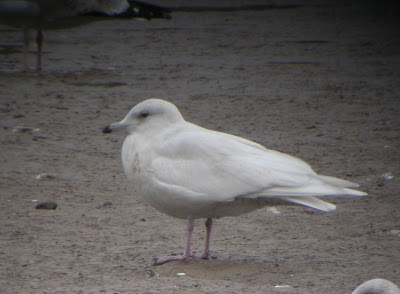 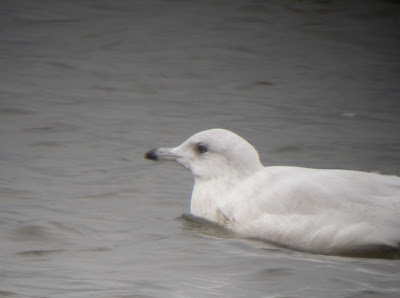 This morning, I wanted to give the marshes and other Ibis-friendly sites a good look over. Lower Bruckland Ponds, the Estuary, Bridge Marsh, Black Hole Marsh, Colyford Common, Colyford Marsh and Seaton Marshes were all visited in the first couple of hours of today. No Ibis!The Cetti's Warbler was still at Lower Bruckland Ponds, calling and singing early this morning. On Bridge Marsh, eight Ruff were amongst the Lapwings (there were nine here yesterday).Black Hole Marsh was rather quiet, but overhead a few Mipits and a Skylark flew over, making me wonder whether they were genuine migrants? It really did feel spring-like out there today.My last stop was Seaton Marshes, I really should come here more often - it was crammed with duck! My best estimates being 450 Wigeon, 100 Teal, 14 Shoveler and a cracking drake Pintail on the lagoon... 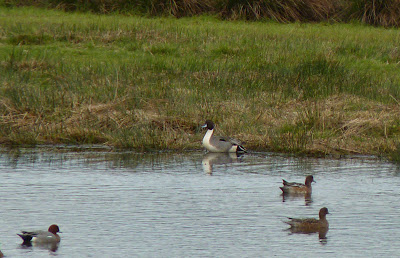 What a stunner!
After enjoying this beastie, I turned my attention back to the Wigeon flock, and soon turned up the pale female (see HERE and HERE).It is very striking bird, and is always very easy to pick out... 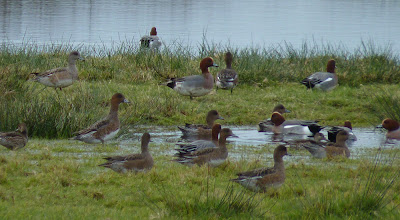 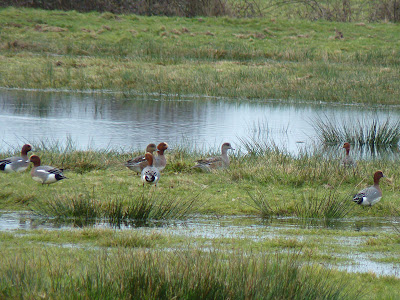 The upper left bird in the top photo, and middle bird in bottom photo
And by total fluke, I managed to get an underwing photo as the flock took flight... 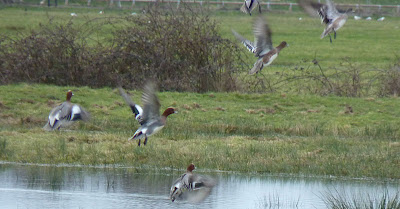 The top right bird (about to fly out of shot!!). Looks nice and white doesn't it :-)
I have to say though, when I cropped this photo and zoomed in a little more, it shows it to be a bit less white and a tad more grey... 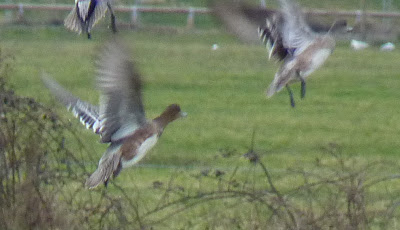 Hmmmmmm....
It was all looking good for it being an American Wigeon despite these 'not quite white' underwings. Well it was until Gav got an upperwing shot, which flushed the fuss right down the toilet. Now it seems this bird is just one of those odd pale female Eurasian Wigeons..... bums!So, what an exciting day of ups, downs, and learning. I think I need to sit back and chill for a bit before I go to work! Oh, I know, gazing at this for a while may help.... 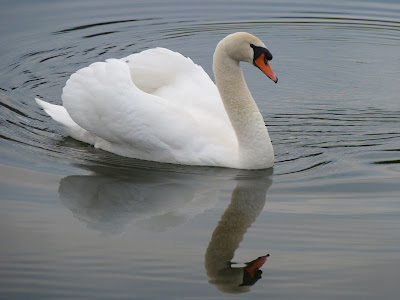 The First Hint Of Spring?

I've been away for a couple of nights - I had a few bird surveys to do near Plymouth (though just over the Cornish border).This morning, just before I began the journey back home, I had a quick look off Torpoint. There's a small flock of pale-bellied Brent Geese wintering here, and two of them are colour-ringed. I've not seen them close enough to read the rings though, so I dropped in this morning on the off chance they were nearer....they were about a mile away as usual! It was certainly a worthwhile stop though, as I noticed this just offshore... 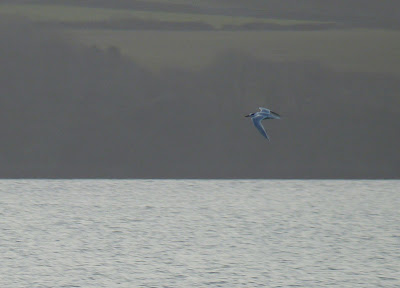 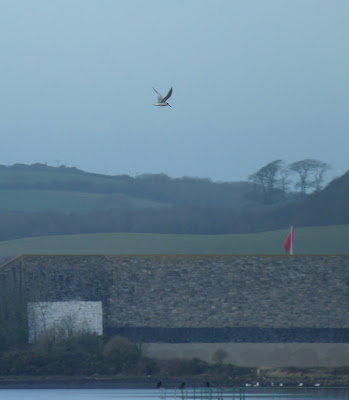 A Sandwich Tern!
This is the first February Sandwich Tern I've ever seen... Sand Martins and Wheatears next :-)I was back on patch by midday, and had a bit of a look about before coming home. First stop was Lower Bruckland Ponds, where at last (this winter) there was a diving duck... 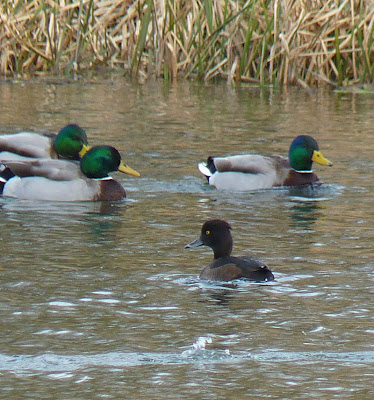 A female Tufty
I wonder if she came from the diving duck flock at Chard Gravel Pits!??Also in this look about, a Knot and ten Ruff. But that's about it!I forgot to mention on this blog that last Friday a flock of 16 Gadwall were grazing on Colyford Marsh - including ten drakes. That's a bloody big flock for us!
Posted by Steve Waite at 14:17 No comments: 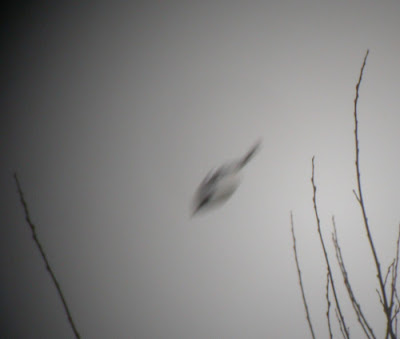 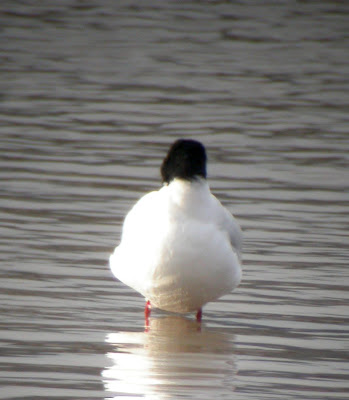 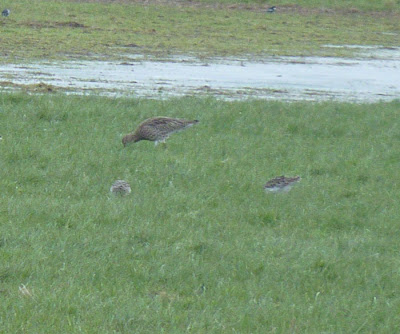 Name those birds...
Well I suppose they are actually quite obvious!After a quick scoot around the patch soon after dawn, I embarked on a bit of a twitch!It took me quite a while to find the damn bird, but there were plenty of other bits and pieces to look at at Smeatharpe Airfield; 35+ Golden Plover, Snipe, good numbers of Fieldfare, Redwing and Skylark.I took me about an hour to find the Great Grey Shrike, I watched it for a few minutes, took a couple of photos, then it dropped down and simply disappeared! And yes, that was the time that 'Mystery bird photo one' was taken! Here was the preceding photo... 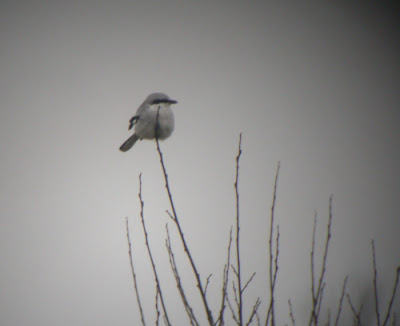 There's nothing better than a Great Grey Shrike on a freezing cold winter's morning
I was back on patch at half 11ish, but a sweep of the Estuary revealed little.Another look around mid afternoon showed two Ruff on Bridge Marsh (yes, that's 'Mystery bird photo three!') and eight adult Med Gulls on the Estuary. One of the Meds was white-ringed, but too distant to read, and several were supporting half decent hoods - like this one... 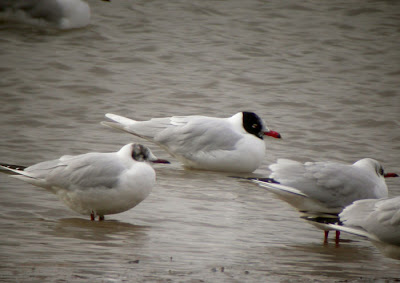 Phwoar!! There are few gulls sexier than a summer plumaged Med!
And yes, the last photo pictures the same bird as featured in 'Mystery bird photo two!'.
Posted by Steve Waite at 16:43 No comments:

Yesterday Gav refound that pale female Wigeon from Jan 1st. It was on Bridge Marsh - and I can't believe it has been here all this time without being seen!!! I have to say, despite no contrast between the grey neck and orange breast, I think it does look good for American Wigeon. Just need to see the underwings now! No sign of it - or many Wigeon at all - today.The only birding I managed today was an hour out from 16:00. Bridge Marsh was THE place, with masses of Lapwing on show. Amongst them, two Golden Plover weren't that much of a surprise, but eight Ruff were! The Axe always seem to do well for this species when it gets a bit cold - which I'm very happy about because I think they are stunning waders!
The Estuary showed 124 Dunlin, a few Barwits, but nothing obvious new in.

Earlier whilst I was in the garden, a

Lesser Redpoll flew over - regular enough over here in the autumn but a true rarity in the winter months.
Posted by Steve Waite at 21:18 No comments:

As Cold As Ice

Very cold out and about this morning, with lots of ice about. There was even some on the Estuary... 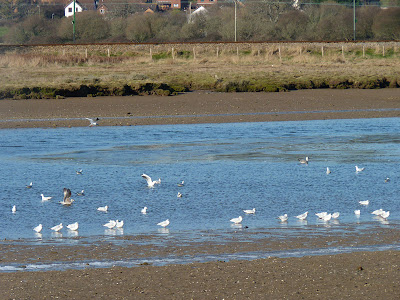 Not an every day sight!
I've had a couple of tours of the river valley today, but haven't seen that much really. Four Gadwall and a few Med Gulls on the Estuary being as good as it got for me.I had to go to Axminster mid morning today, so thought I'd drive a little bit further north and look over a certain quarry pool. It's the kind of pool that you know what birds will be on it before you've even lifted your bins up.... 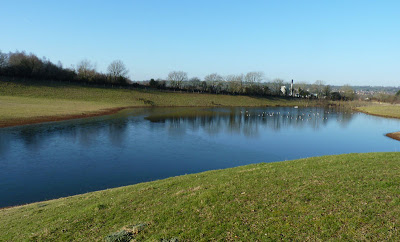 That group of birds on the far side is surely going to include too many Canada Geese, a few Mallard, maybe the odd aytha duck and a couple of Coot, possibly even a Cormorant... 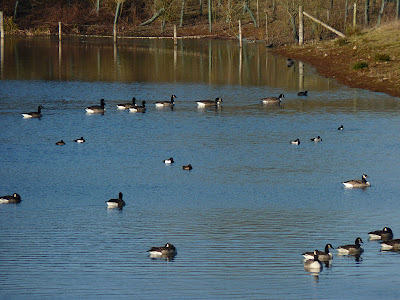 Yes I was right! 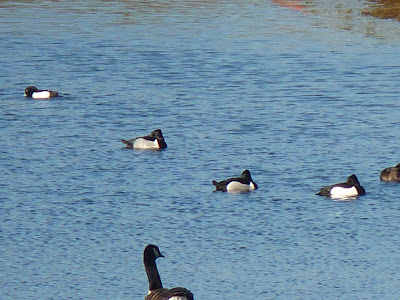 OH! Hang on a minute...Yes you guessed it! I went to Chard Junction Gravel Pits to see these two beauts.... 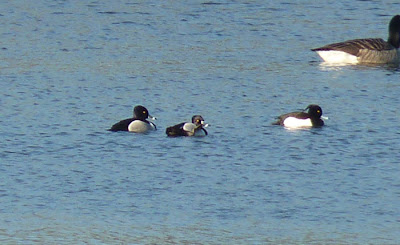 two stonking male Ring-necked Ducks
They were nice to see yes, but I hate their guts because they are simply refusing to fly south! Please boys - just one of you will do - you just HAVE to give Lower Bruckland Fishing Ponds a visit.....
Posted by Steve Waite at 14:24 No comments:

Still no white-wingers, but a bit of cold weather movement has fired me up a little...This afternoon on patch, a nice flock of 12 Gadwall were floating about north of Coronation Corner (eight drakes), and on Bridge Marsh were these seven Golden Plover...

Can you spot them all?
Also on Bridge Marsh, 220 Wigeon. Back to the Estuary, and amongst the gulls were eight Med Gulls; seven adults (one near summer plumaged and one white-ringed) and a single second-winter bird. Earlier in the day, I was in Exeter so popped down to Dawlish Warren to have a look at the wintering Surf Scoter. Despite the choppy conditions I soon picked it up off Langstone Rock, along with a single Slav Grebe.I was feeling lazy, so tried to scope the American Wigeon from Cockwood. Epic fail! The Wigeon were miles away, and they were all a hazy blur! A bit of a surprise here though were two Egyptian Geese on the water's edge, near to Railway Saltmarsh. However they obviously didn't like it much, as they soon took off and flew up river. Bloody typical that I left my Lumix in the car - they flew right past me (half way between me and the wreck).
So, let's hope this cold spell continues to produce...a drake Ring-necked Duck or two would be nice :-)
Posted by Steve Waite at 14:16 No comments: