Finished the day on a bit of a bum note really, as am pretty sure I let a Cattle Egret through the net.  We have at least one in the Axe Valley at the moment, but it's not flown past whilst I've been looking and I think it's spending most the daylight hours north of us. At about 18:50 I got on to a flock of eight or so egrets ten seconds too late, just as they disappeared behind a house. On size, one right in the middle of the flock was probably the Cattle, but just not enough to confirm.

The day started off much better, with a phone call from Phil who kindly thought of me when three Med Gulls were flying around over Tower Hide with a small flock of Black-heads.  I rushed out and despite the absolute appalling light, they were easy enough to pick out with my bins...

I was actually really impressed considering the conditions that the P900 was able to pick all three out...

You'll be surprised to hear that the Black-headed Gulls were also a new one for the list, their numbers have dropped right off on the Axe over the last couple of weeks (as usual for late March). So that's 51!

52 was a nice surprise, as it was an all-time garden first!  Wheatear.  Yes, over the years I probably could have seen plenty if I'd scanned the distant fields and salt marsh for long enough during spring and autumn - I've just simply never bothered. Today I did, and for ten minutes late morning I watched one feeding in the corner of Norcombe's field. Delightful. But it's a good job they're pale and stand upright - a pipit or such like I would never have seen considering the distance.

Well what strange times we are in.  Just as the birding calendar starts to look interesting we all have to stay in!  Quite rightly too though I must add.

I will start by saying how lucky I feel in the midst of all this anxiety and unknown, for three main reasons;

1/ I still have a job.
2/ I haven't been told I need to completely self-isolate for three months.
3/ I live where I live.  A four minute walk from Seaton Wetlands (perfect for daily exercise) and we have a nice view from the house.

Speaking of the house... Like many birders up and down the land I am pumped full of pre-spring anticipation, it's been gradually building since early February. Instead of letting it all go to waste I am going to re-direct it. And that's where 'Lockdown Listing' comes in!  We can't really leave our homes so let's see what we can see from them.  So for as long as this goes on my new patch is my house.

I live in Primrose Way, Seaton, which is right at the top of town.  We are basically the last line of houses before town becomes fields, where this red dot is...

When Jess and I were looking to move to Primrose Way, we had the choice of two houses.  The first was finished to a much higher spec and had a slightly larger garden, but the view was nothing - surrounded by tall trees and other houses.  Then there was the second house, not quite as well finished, but when I saw the view from the bedroom window I knew it was the one...

What you can see there is the large hill above Axmouth.  In front of that and behind those houses is the upper most section of the Axe Estuary, Axe Reedbeds and Black Hole Marsh.  Frustratingly due to trees and houses, you can't see any mud on the Estuary or the Marshes, but it's tantalising close because in the gap between the white and red brick house above you can see tram track...


At high tide I can see water, especially during floods as all that salt marsh behind becomes submerged, but nothing at all is visible at low tide.  So to see a bird from the house that happens to be on the tiny section of Estuary in line with my house, or on Black Hole Marsh, it needs to be all of the following;

1/ Flying.
2/ When I'm watching.
3/ Not flying too rapidly or far as it would quickly go out of view, and
4/ Be a fairly large and easily identifiable species, as we are talking about a distance of almost half a mile!

Luckily for me water birds are often noisy, especially at night when sound travels far.  Many species have been added to the house list thanks to their night time calling - a handy tactic to add some of the harder to ID at distance in flight species!

With such an open view to the east, there's a lot of sky so it's an excellent raptor view point, especially as the Axe valley seems to act as a funnel.  The view out to the west is pretty sky-rich too...

Also looking out the west side of the house, from my house you can see two small green spaces bordered by large trees (one of them is viewable in the pic above). This is where I've found four Yellow-browed Warblers over the years.

Looking back out the east side of the house, if you turn to the north you see this...

The fields behind are a bit of an eco-dessert for most of the year, although in late summer/autumn after they are rolled they become inviting for wagtails, pipits, larks, thrushes - and I can't help but slip in I've had Cattle Egret and Glossy Ibis on them!  The trees in the foreground however are often very lively, as they seem to form a much used corridor for passing birds. I know I am going to get something really good in them one day - Firecrest and Lesser Whitethroat the best so far.

So this ladies and gentleman is where I will be doing pretty much all my spring birding from in 2020. And Lockdown Listing is already four days in...

I haven't actually been able to give it much time over these four days as I've been working most of them, albeit in the conservatory with the double-doors wide open!  Have still had some nice highlights though, and here's a day by day account thus far;

Day One. (Tuesday). A cream-crown Marsh Harrier circling low over the river valley at 10:45 easily the highlight. A good local record on any level so a really great start! Also Peregrine, displaying Sparrowhawks and Kestrels over the house, and absolutely stacks of Buzzards - surprised to have not picked up a Red Kite. A lone Sand Martin flew north just before dusk.

Day Two. Still no Red Kite but again plenty of raptors up. A Greenshank calling mid afternoon from Black Hole was a nice a bonus as there's only a couple around at the moment. I gave the evening gull movement some time, which gave me Great, Lesser Black-backed and Common Gulls.

Day Three. Finally Red Kites - four of them! One flew low and lazily up the Estuary at 12:35, another single flew high south west at 13:25 circling as it went, and finally two flew low north together at 17:00.  Good to see a large flock of Black-tailed Godwits flying around in the evening.

Day Four. I filled a few holes in the list today, namely Jackdaw which has been strangely hard to get!  Also Linnet over today, and finally saw some Redshank in flight.  Still haven't seen/heard a Teal yet, even though I know there's at least twenty on Black Hole Marsh at the moment!

So I end day four on 49 species.  It's good fun and some nice light relief during such troubling times - plus it's not like we haven't all got lots of time at home ahead of us! Give it a go yourself and I hope you enjoy my future reports....there will be many!

Stay safe everyone.
Posted by Steve Waite at 22:11 No comments:

Firecrest and... It's Spring!

Felt sorry for this lovely Firecrest today, found by one of my team on the ground near a tram parked up outside Seaton Station.  She took this snap on her phone, but when she subsequently went to pick it up it flew off strongly into nearby bushes. 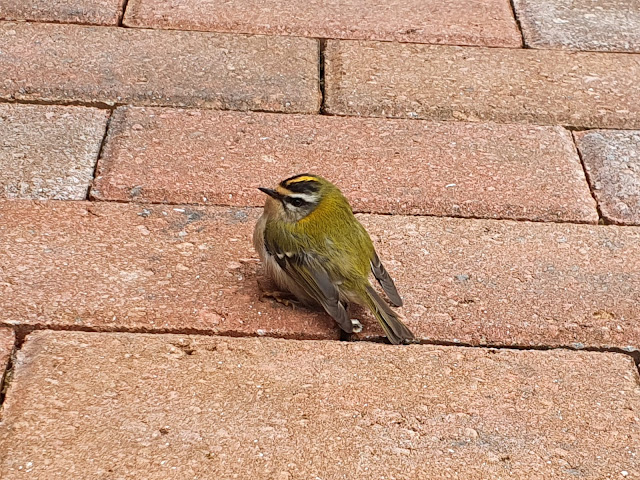 Am pleased to report that about an hour and a half later I was watching it busily feeding in bushes alongside the track a little way north of the Station (at the back of Tesco). I've not seen one in the centre of town before!

I managed a whilst-at-work Wheatear yesterday too, on a day there had been a significant influx of this species on the south coast.  I could only spy one on Sheep's/Seaton Marshes, but he was much appreciated.  I saw/heard four Chiffchaffs yesterday too.  Spring has clearly stepped up a notch within the last couple of days, with Dad seeing a few Sand Martins and a Swallow at Black Hole Marsh mid morning today as well.