Whenever I've been outside during the past week I've been mostly looking for/at Starlings! The beginnings of what could well prove to be a mightily impressive influx of adult Rose-coloured Starlings into the UK is underway, following exceptional numbers seen in central and eastern Europe.  Most the local Starlings are still in their family groups at the moment, but there does seem to be plenty of them dotted around so hopefully some big groups will start to form.  We are all very keen to see an Axe Rose-coloured Starling following the painful near miss we suffered in Colyford many years ago. An adult bird graced private gardens for almost a week in June, and we only found out about it the day after it was last seen...


Today has seen some classic murky grey and sometimes wet weather, and being late May that's meant wading birds!  Tonight Black Hole Marsh was bursting with Arctic nesting waders including 24 Dunlin, six Sanderling, four Ringed Plover and singles of Grey Plover (cracking breeding plumaged adult, been around a few days now) and Bar-tailed Godwit. Ian Mc had a Turnstone and a few more Sanderling on the Estuary earlier in the day too.

I didn't have long so couldn't get closer to any of the birds by going up to the Tower Hide, but still want to include some pics here to give you a flavour of the evening...

It's been a busy two days off for me, mostly because today was Harry's 1st Birthday! Quite how he's already one we really don't know, but today was our first experience of hosting a children's birthday party and I have to say I loved it!  If I analyse why, having party food in the house all day may well have been a significant factor :-).

The annual rush of Arctic breeding waders has been taking place over the last three or four days. If we'd had more rain then we would have seen many more I'm sure - three figure flocks of small waders are easily possible on some wet May days, but still there's been a decent variety.  Phil's done the best on Seaton Beach, with a couple of Sanderling flocks and a Turnstone on Wednesday morning, but Thursday night the Axe Estuary gave me a busy group of 32 Dunlin, six Ringed Plover and two splendid Sanderling feeding opposite Coronation Corner.  The following night there were fewer small waders about but Black Hole Marsh hosted two Bar-tailed Godwits and ten Black-tailed Godwits with a first-summer Med Gull on the Estuary...

There was clearly some good feeding conditions off Seaton Beach on Wednesday evening, as 18 Sandwich and a couple of commic Terns were feeding offshore. I also had two Sandwich Terns fly down the Estuary early on Thursday morning.  On Monday night it was nice to see a churring Nightjar on Bovey Down, seemed to be all on his own though so hopefully there are more to come.

Since my last post I'm pleased to say heaps more hirundines have been pouring into the UK - better late than never! Be interesting to know what's been holding them all up?

Am pretty sure that any and every birder who regularly watches a coastal area or migration hot spot will agree with me when I say spring 2018 has been absolutely dire. Numbers and the variety of species has been dismal, with only two single days here when the bushes could have been described as being 'busy'. The skies have been far quieter than usual too, with very few days when visible migration actually got going.

Now this on it's own could mean nothing. In my opinion you simply cannot accurately monitor population numbers of migrant birds species on 'how many you see passing through the coast'. There are just too many variable factors when it comes to migration and spring falls, with the weather being the greatest. If the sky is blue and there's a gentle south westerly wind giving migrants a helping hand as they fly north over the English Channel, then there's absolutely no need for them to land on the first bit of coast they see. Also, if they've had a good trip up from South Africa to Southern Europe, then they'll have more reserves than if they'd had a bad trip up, so again, less likely to drop in on the south coast of UK. Food availability can be a major factor too, if they've had plenty of chances to feed up during their journey northwards then they will again have more reserves to fly further without the need to stop. So so many variable factors that can dictate how many migrant birds we see on the south coast during spring.

What is really worrying though is the comments and stats I'm seeing all over the internet regarding the numbers of many of our migrant birds on their breeding grounds. Let's take a quick look at BTO BirdTrack, the best platform to monitor and compare UK bird population data through citizen science. This is the current graph for House Martin...

The magnitude of comments that I've read on Twitter and various blogs regarding poor numbers of some of our migrant species on breeding sites have been particularly focused on Swift, Swallow, Willow Warbler, Sedge Warbler and Common Whitethroat. Also some of the scarcer species seem to be in a bad way too, like Wood Warbler and Nightingale.

A week or so ago I was pretty certain spring was just running late this year, but it's the 18th of May and I'm now thinking this isn't the case. I really do fear something catastrophic may have happened, either during the spring migration or on their wintering grounds.

I'd be very interested to know what your eyes/ears/stats/mist nets are telling you, drop me an email or leave a comment if you get the chance. 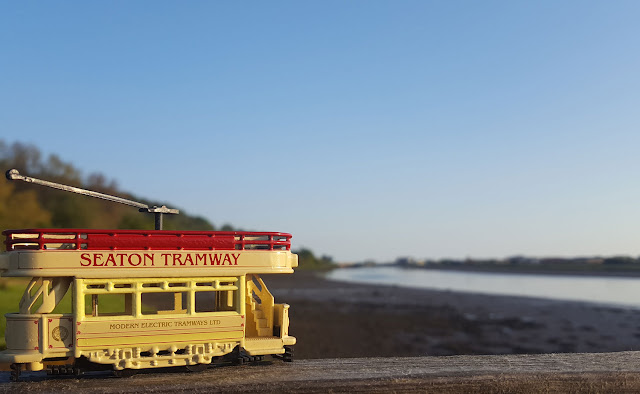 Anyone who has visited the Axe will know the prime location of Seaton Tramway, Seaton's leading tourist attraction. Well I'm delighted to say that this morning I started working for them, as Manager of the new Station in Seaton (which is actually still under construction!).

Once the Station is up and running, I hope to use my local wildlife knowledge and experience to further enhance the Tramway and what it offers customers, and the local wildlife scene. A truly exciting prospect, and right at the heart of the place that I love most.

To say I'm thrilled is an understatement...

Well that's birding for you! In March this year I saw my first spring drake Garganey on patch for a whopping (and surprising) eight years. This evening I saw another... 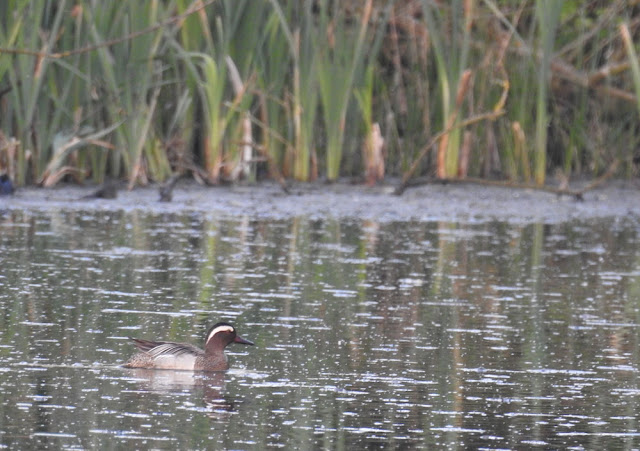 Many thanks to Tim Wright who found this bird earlier in the day. I didn't get round to seeing it until late on when the sun was setting, the light was fading as I was watching it so my pics aren't great at all, especially colour-wise... 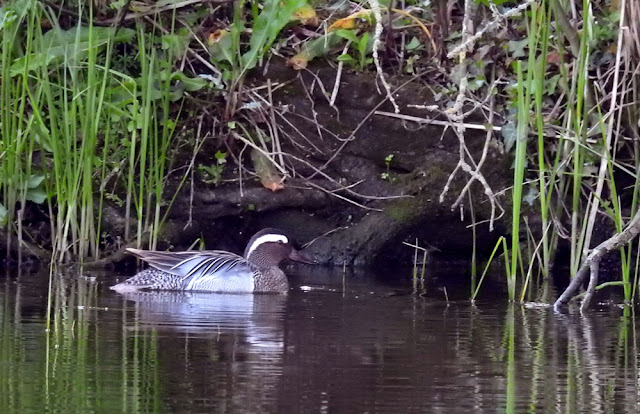 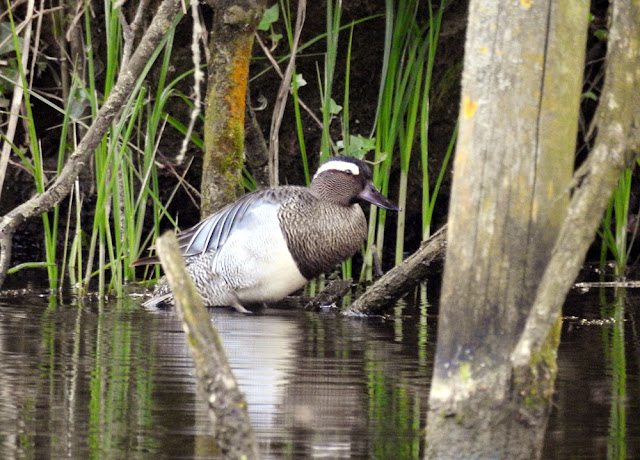 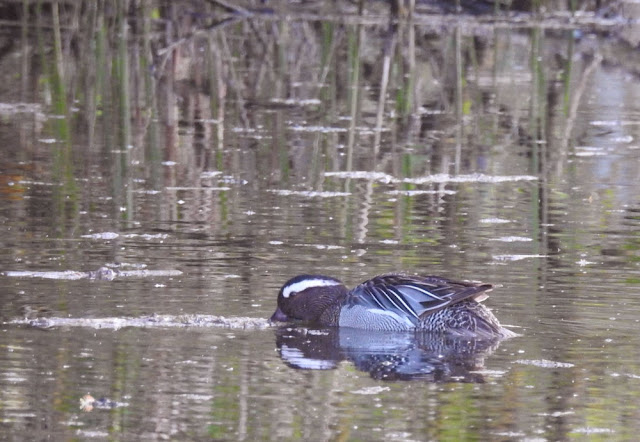 And here's a short video...

It was really amazing to hear it call as well, several times. Not a sound I've ever heard on the Axe Estuary before. Just brilliant and so atmospheric!


Not really a surprise considering the weather we are currently enjoying, but I had a Red Kite fly low west over the house just after 9am today. There were two reported on patch yesterday too, so no doubt I'll be seeing a few more over the forthcoming days...

Yesterday saw a good shake up in the weather, with a front arriving from the south overnight Tuesday/Wednesday producing strong winds and heavy rain. There was a bit too much rain on Wednesday morning for decent sea watching, but I gave it a go anyway! 07:40 - 08:40 from Spot On was wet and at times quiet, but another twenty minute watch from 09:45 with Phil showed a bit more was on the move once the worst weather had gone through. By mid morning the wind turned and began blowing from the north west which put a stop to any movement.  My totals from both watches came to (flew west unless stated);

A bit of rain and wind in early May always seems to drop Sanderling on Seaton Beach, my thanks to Phil for texting me about these. The seven settled birds ranged in plumage from full summer to just moulting out of winter wear...


Wednesday wasn't a complete wash out though and the sun came out mid morning. A dog walk around the back lanes of Axmouth showed several singing male Common Whitethroat and a smart and fairly showy Lesser Whitethroat. I will keep an eye on it as it's a place I've never had one before. Lesser Whitethroats actually seem to be increasing in our bit of Devon over recent years, going against the grain of virtually every other migrant species!

Sadly I missed what was probably the best spring fall of long-distance migrants for several years on Sunday due to work, and it was only Kev who managed to get up to Beer Head and other sites around Beer. During the day he notched up six Redstarts, ten Whitethroats, four Spotted Flycatchers and a Garden Warbler, as well as excellent numbers of Willow Warblers constantly passing through. Who knows what else would have been discovered if more people were able to get out on the day, sadly Clive and Ian Mc were both away and Phil and I were working.

Although I missed all the passerines on Sunday, I was fortunate to luck in on a couple of Red Kites that flew low west over Seaton in the early evening, causing mayhem among the gulls. Tim White had seen them arrive from the east and I just happened to be driving through town when I noticed all the commotion. They really were low, not that you can tell that from my photos, but they did gain height again as the headed off west.

Not got much else to tell really despite this being my first blog post for a week. There are more Reed and Sedge Warblers in now, and Friday 27th saw a truly impressive arrival of Swallows with flock after flock arriving low over the beach. Always so thrilling to see active migration like this. That evening Phil saw an Osprey, or maybe two, fishing on the Estuary - like so many species it's been a poor spring for them.