This is a sight I have longed to see on patch...


Yes it's a Cirl Bunting, a stunning male at that.  Truth is though I am still longing to see one on patch, but since a small number have been found just a few miles outside our patch boundary by Clive and Dan, there's a real sense it could happen any day now!

In the glorious blue skies of this afternoon, things were looking really promising with one or two singing males and a pair keeping themselves very much to themselves.

It's clearly a good spot for buntings, with at least nine Yellowhammers present too...

Surely it's only a matter of time now...

I didn't want the run of blog posts to completely dry up, not that I've got much to tell!

Goosanders have been seen fairly regularly recently, most often in flight near dawn or dusk in the vicinity of Black Hole Marsh.  A possible 'one that got away' is worth blogging about too; A small grey goose seen with the Canada flock reported by a local to Phil - unfortunately not present when Phil got down there mind.

Wish I had time to go through the gulls today, as there were huge numbers present at about 2pm. I have given them a couple of scans during the past week or so, but have returned nothing better than a couple of wrong'uns...  One I am pretty sure was a second-winter argentatus Herring Gull but I didn't get to see enough to 100% convince me. And the other, well it was a Herring Gull, but it just had the stance and perfect posture of a Caspian - more so than any Herring Gull I've ever seen before.  I did wonder about hybrid but there's nothing else to suggest that's a viable option...

A female Blackcap has been regular in Mum and Dad's garden since Christmas, with a male occasionally showing up too.  Interestingly over the past week, presumably due to the colder weather, she has become highly territorial and surprisingly aggressive towards any other birds trying to get near the tree with all the feeders in. Only the Robin can see her off, but the Greenfinches, Chaffinches, Great Tits, etc don't get a look in!  She's one feisty girl... 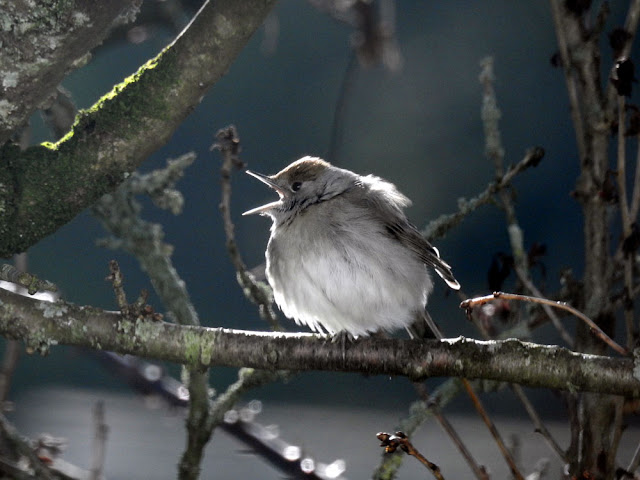 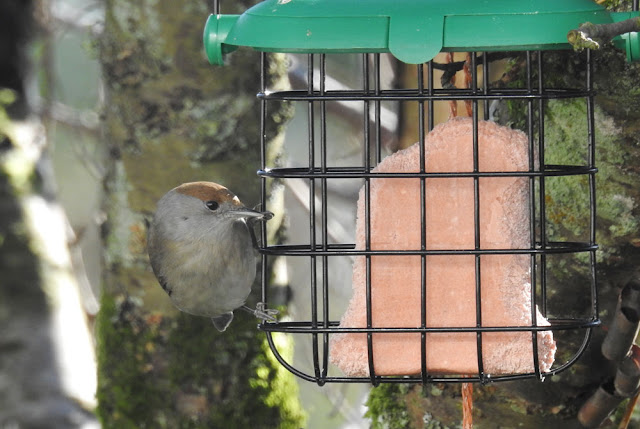 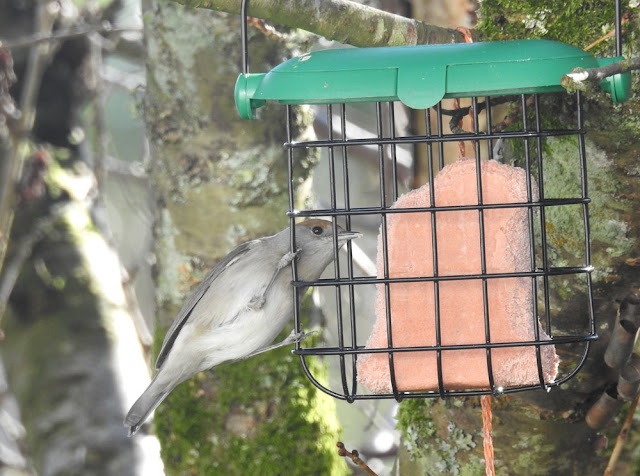 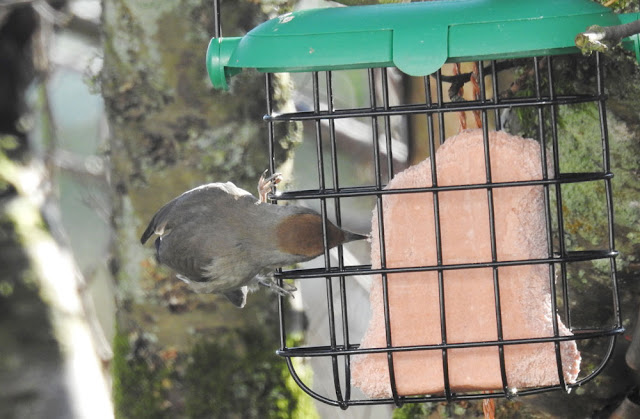 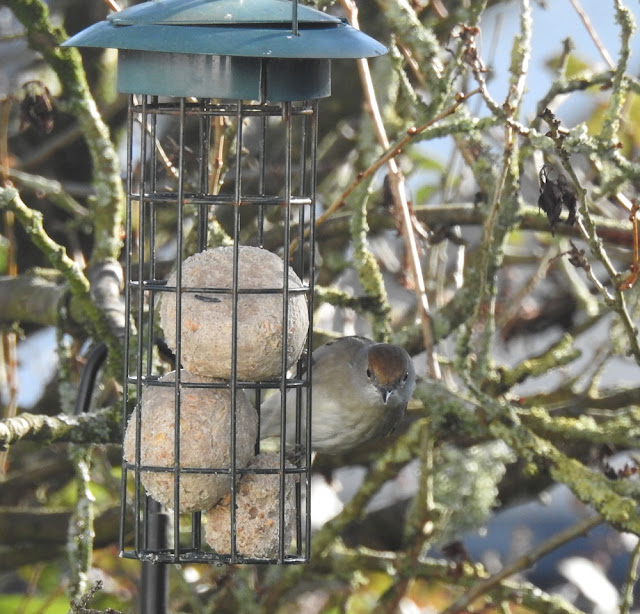 It's not like there isn't enough food to go around....

Winter can be a bit of a long, slow and sometimes dull season for the patch birder, this winter especially so on the Axe. There's not been much other than the usual fare so far, and numbers in general have been pretty poor.  But like any patch birder, whispers of snow in the forecast early last week raised my excitement levels, and Thursday night delivered a fine but widespread covering of the white-stuff...


Major snow events often deliver some impressive bird movements on/over the Axe, but I really wasn't expecting much when I woke up on Friday morning.  It was only a fine covering of snow, it wasn't country-wide and I knew it wasn't going to be in any way a prolonged spell of cold.

I spent the first hour of the day looking out from the house and garden, and what I saw seemed to confirm my thoughts; a couple of small groups of Lapwing, one Golden Plover and a flock of 15 Redwing flew over.  I then had a look around the Estuary, and other than a group of about 40 Fieldfare on Bridge Marsh - nothing else was where it isn't usually... 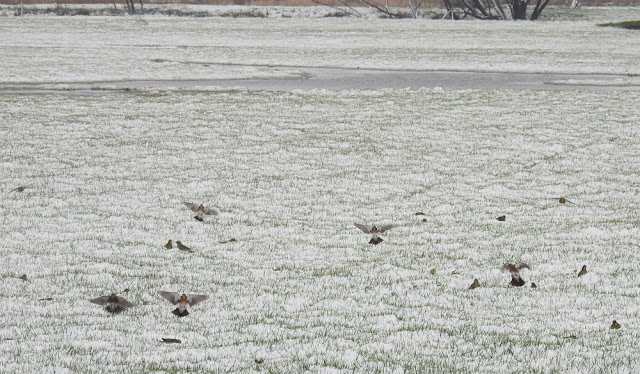 But then I went to the seafront....  and saw the most mind-blowing bird movement I have ever witnessed in my entire life. Just take a look at these two short videos. Make them full screen and turn the sound up...


Thousands upon thousands of thrushes!

I wish I could have just stayed there all day, but the only way I could quantify this movement in any way was by counting 'Portland-style' (a selection of 'sample counts').  Between 10:00 and 15:00 I carried out one 15 minute count, one ten minute count, two five minute counts and three two minute counts.  The last one at 15:00 showed that the passage had slowed a bit, but all previous counts gave an absolutely astonishing figure of between 400-500 thrushes passing PER MINUTE! Huge flocks were passing over, almost constantly - gaps often of only 20-30 seconds between flocks.  This statistic is staggering on its own, but when it's multiplied up it becomes really mind destroying.... Even if we take the lowest figure, 400, this suggests that somewhere in the region of 120,000 thrushes flew over Seaton on 1st February! As staggering as this number is, I am certain it's  an under estimation, especially as they were clearly passing in these numbers prior to 10am, and I've included nothing that may have passed after 15:00.

Looking at the species break down, Redwings were by far the most abundant species, with an estimation of 80% of the all thrushes seen/heard being this species. This would make the Redwing day total somewhere in the region of 96,000! Unreal.  I did hear the occasional Song Thrush call emitting from the chaos and Fieldfare made up the remaining 20%.

James Mc at Lyme was also seeing this passage, as was Dan over at Sidmouth and Kev in Beer.  What I can't believe though is that was it.  No reports of this massive movement west of Sidmouth, in fact Dawlish Warren reported virtually no thrush movement at all! And the only reports east of us were from Portland where up to 10.000 Redwing were seen to leave north west over Ferrybridge (http://www.portlandbirdobs.com/2019/02/1st-february.html).  What on earth is that about!? Where did they all come from and where did they all go!?

Skylark were also moving in good numbers (I noted a couple of hundred, so 1000+ probably passed during the day), with a calling Woodlark over Seafield Garden at 10:45 being a nice highlight. Kev had a second one over Beer an hour or so later.  I also logged a couple of small flocks of Lapwing and the odd Linnet, Chaffinch and Siskin, but in general variety was poor and it was all about thrushes and Skylarks.

As I'm typing this my mind is still blown to be honest.  Feels almost a bit like space, involving numbers that only people like Brian Cox can truly comprehend.  Just so so so many birds.

About mid afternoon I had another look around the valley, and by now ground was starting to thaw and birds were congregating in these spots.  The slope just to the east of the Estuary was like a rolling carpet of Redwing, 500+ birds here (at the same time as the passage was still  happening over the seafront by the way!).  Bridge Marsh also showed lots of thrushes along with a flock of 60+ Skylark.  Then just up the road, the field north of Colyford WTW was again full of thrushes, a flock of Skylark, 300+ Lapwing and c60 Golden Plover.  Here's a few pics...


Best of all about this amazing influx of birds was that none of them looked to be struggling in any obvious way.  Everything I saw on the ground appeared to be finding plenty of food, and all the birds passing overhead were flying strongly and with purpose - not something weak birds can do.  It was really nice to witness a cold weather movement without feeling that sadness usually associated with snowy spells. I am really surprised this relatively small amount of snow caused such a drastic response from the birds - we had far less snow than last Feb/March but way more overhead passage.  Do they know something that we don't?

The weather this morning (2nd) was completely different.  Still pretty cold, but crystal clear blue skies and most of the snow had melted away.  There were still lots of birds about, with thrushes flying around everywhere, but they were flying in all directions.  It was nice to catch up with two waders on the Estuary that Phil saw the previous day, a Bar-tailed Godwit and this Avocet...


There were also 47 Dunlin here which isn't a bad mid-winter count for us.  And that's it for this somewhat mammoth blog post.  Truly unforgettable stuff though.