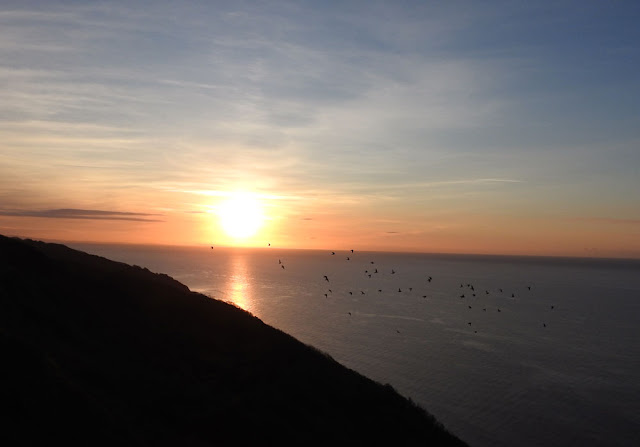 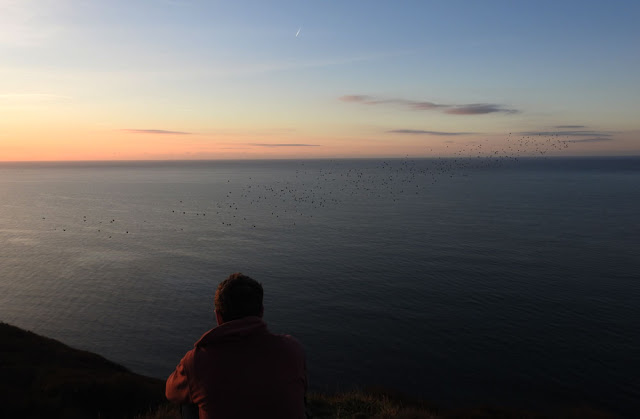 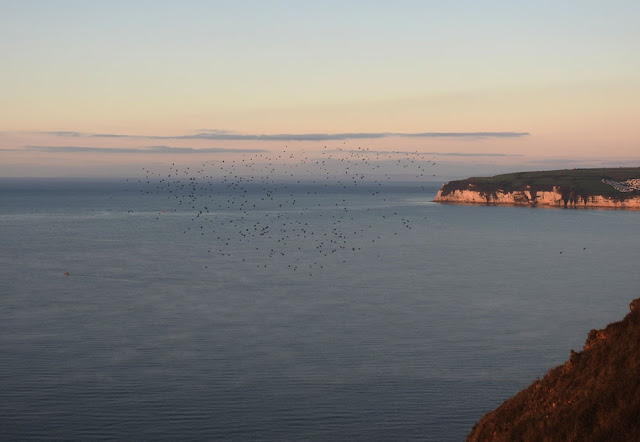 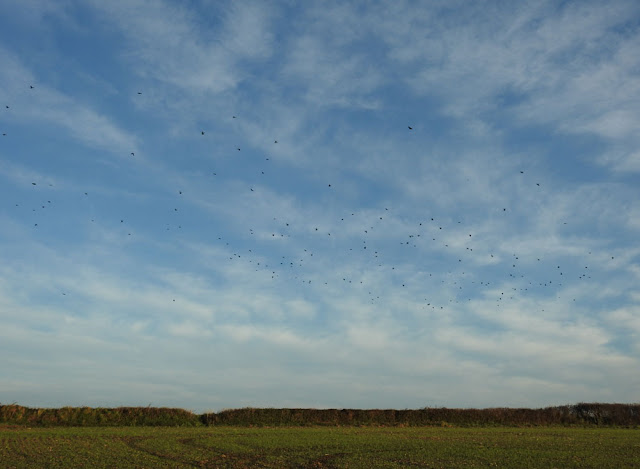 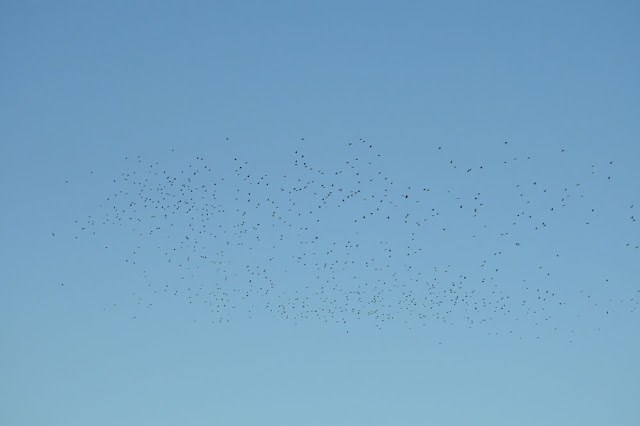 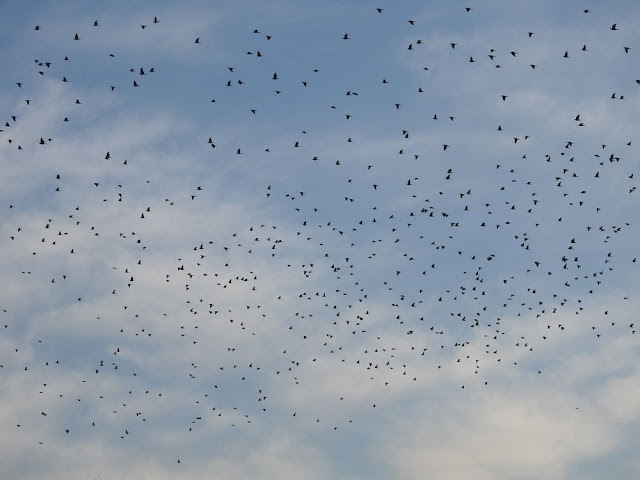 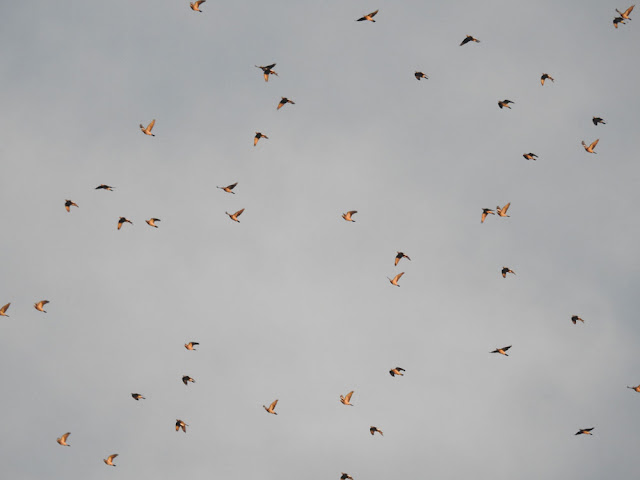 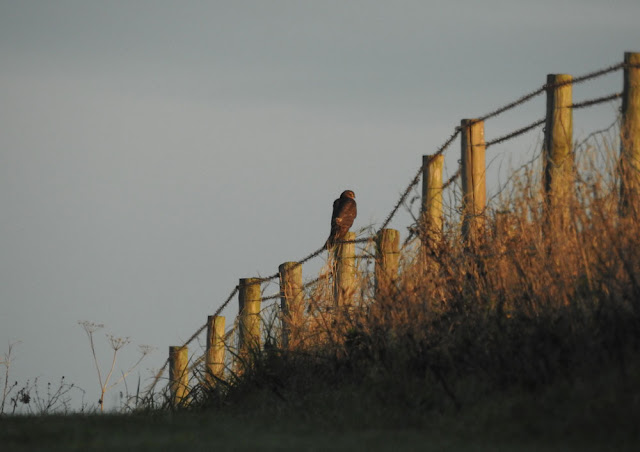 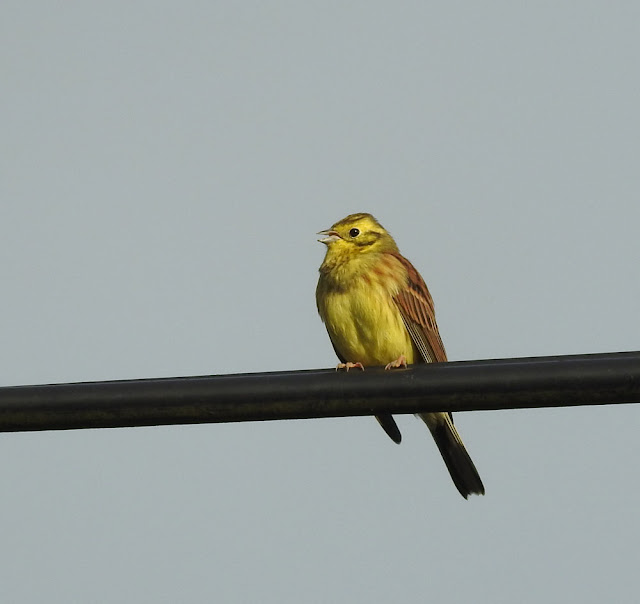 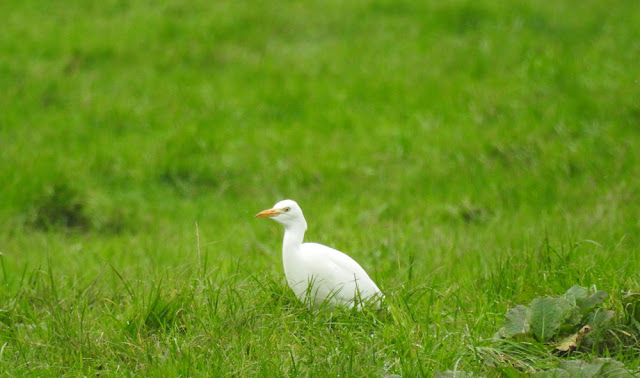 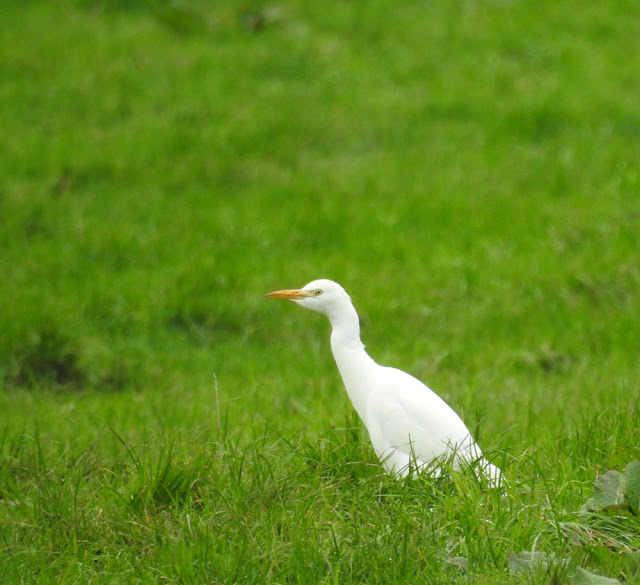 Cracking weather here last night and today, big seas, strong south west wind and plenty of passing showers.  I gave the sea as much time as I could, but sadly no Leach's Petrels came past when I was looking. There were plenty of Gannets out there this morning moving west, along with a lone Shearwater sp. (looked Balearic but mega distant) a few Kittiwake and Auk sp. and one Common Scoter.

A nice bonus was a Sanderling that flew around with three Ringed Plover for a short while before pitching down briefly on the beach... 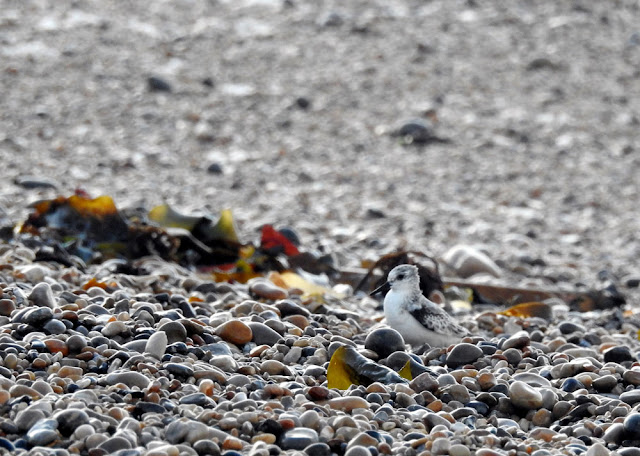 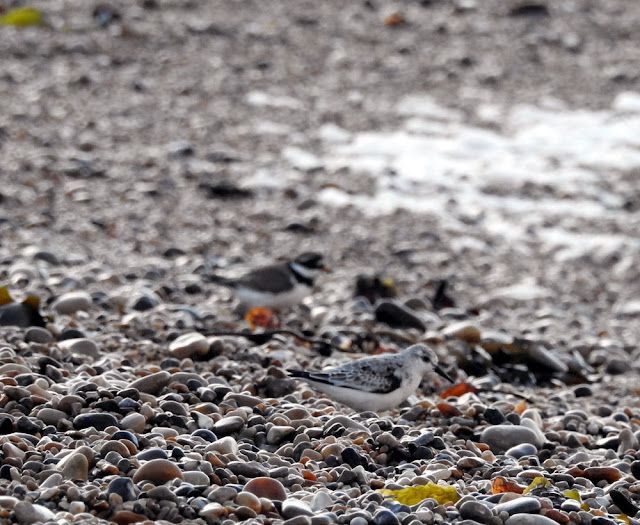 I've also spent time today checking the gulls on the Estuary, there were excellent numbers of Great Black-backed Gulls but nothing better in with them. I suppose the highlight was this first-winter presumed intermedius Lesser Black-backed Gull. Although the photo is pretty bad (taken in strong sunlight) it does shows how fresh this bird looked. It basically looked like it had only just come out of the nest, by now a first-winter graellsii should be far more worn than this... 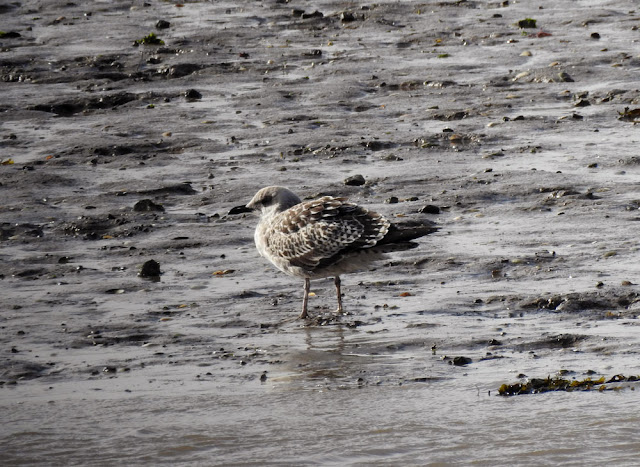 Well Ophelia has come and gone, but in birding terms delivered nothing. She didn't bring any American land birds or waders, and didn't even drag up that many sea birds on her journey - bit or an ornithological flop really. But since then things have picked up...

The last week has seen an exceptional arrival of Firecrest across south Devon and Dorset, well some parts of south Devon and Dorset! Portland recorded an unprecedented 150+ on Sunday, with probably just as many around Prawle/Start/Soar. But other places (Dawlish Warren, Exmouth, here) recorded none on the very same day!  Pleasingly they have started trickling through here now, I had my first at Spring Head, Axmouth on Monday afternoon, with another on Tuesday up by Axe Cliff Golf Course car park. Dad had six at Beer Head also on Tuesday, and Bun another in Beer village. Such smart birds.

A quick look along the beach to see what Ophelia had left us revealed just six Ringed Plover, a Little Stint (presumably the lingering bird) and a whole load more Man o' War.


Wednesday gave us a nice double, although sadly one of which I missed.  Our Reserves Officer James Chubb saw a Great White Egret on Colyford Common (which had previously been at Abbotsbury Swannery), but it soon took flight and headed off south west. So proving to be as brief a visitor as the other two recorded here this year. Drat.  What followed cheered me up though...

Yellow-browed Warblers have proved much scarcer this autumn than recent years, presumably solely because we've not had the easterly winds of the previous few autumns. So, stepping out my front door early afternoon, I was really surprised to hear one call from trees just up the road - my third from the garden! I didn't have great views of it, but Tim White clearly did an hour or so later as he managed THIS fab picture of it - always such smart birds and always great to see/hear.

The drizzle and completely still conditions of last night saw (well heard!) an excellent nocturnal passage of Redwing and Song Thrush overhead, which gave me high hopes for this morning.  But those hopes have not really been lived up too (as usual!), although it did feel really good out there. There was one lovely highlight though...

As I drove over the lower Axe bridge into Seaton, I was amazed to see a flock of six Avocet fly across in front of the car! A really mega-sized flock by Axe standards.  I watched them fly upriver, they then circled around a bit before seeming to drop down on Black Hole Marsh. So I went around for another gander... 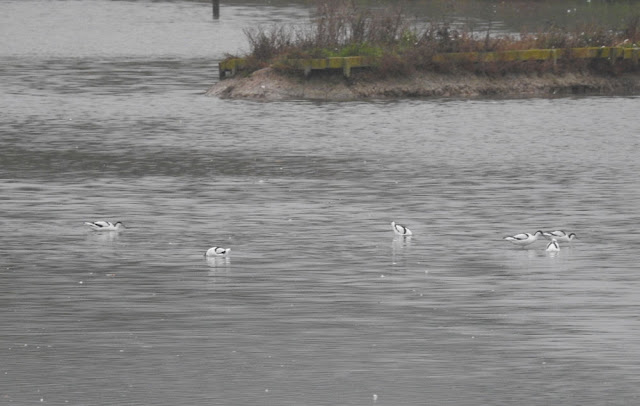 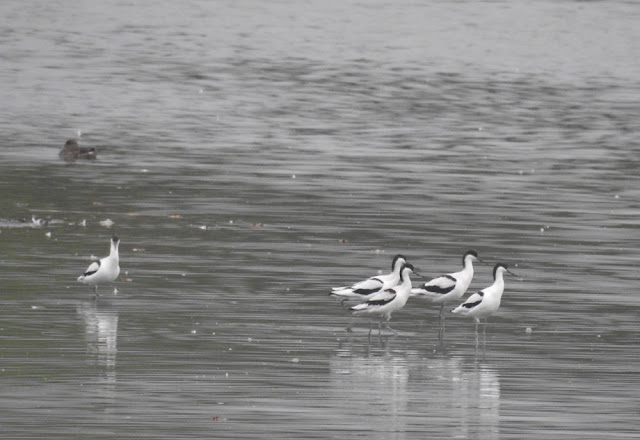 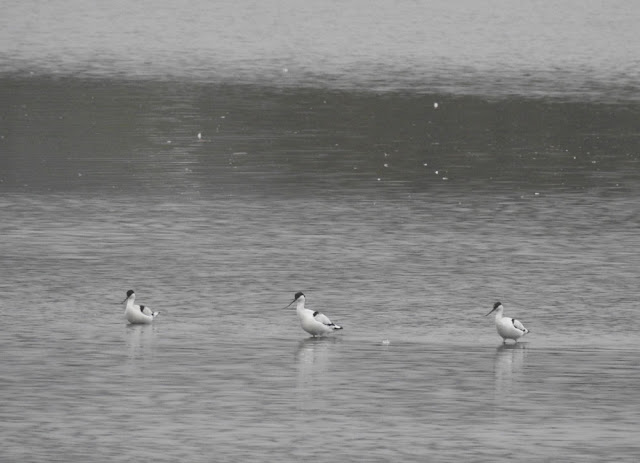 And that brings me and this blog up to date! So good to feel proper autumn excitement - we are a go...

With no urgent bird news to write about, all I've got to report is incredible numbers of Portuguese man o' war washed up on Seaton Beach. I wouldn't be surprised if a walk along the whole length of the beach revealed a three figure count today, with one or two every ten or so feet... 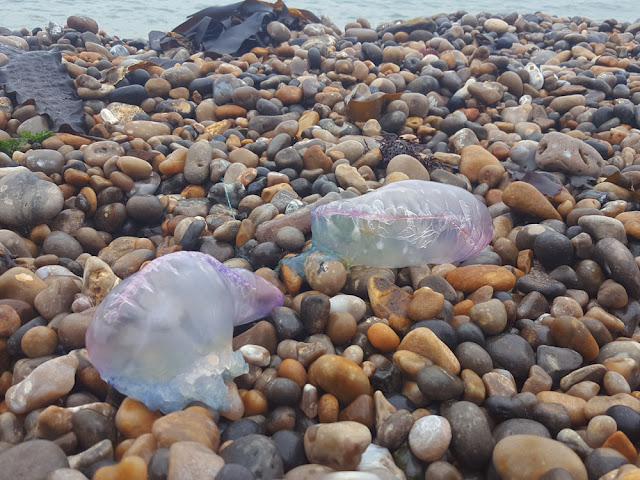 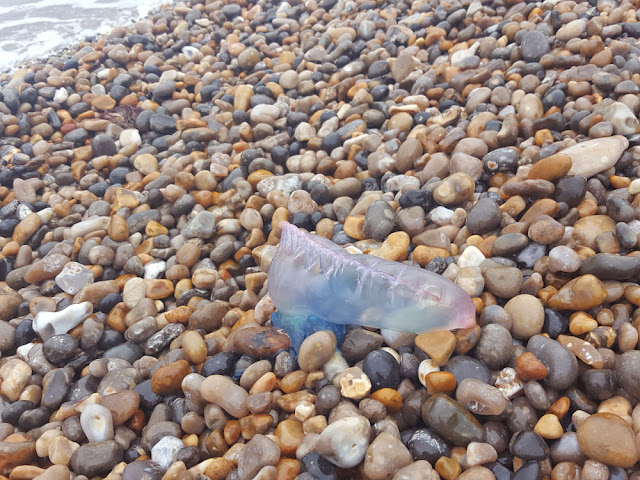 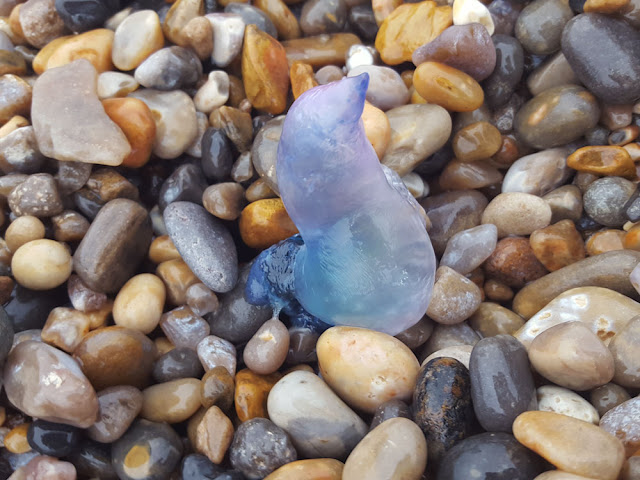 In the bird world autumn has clearly moved on. Goldcrests seem to be everywhere now, and I saw my second Redpoll of the autumn this afternoon.  The Estuary has offered me nothing better in recent days than singles of Little Stint and Bar-tailed Godwit, a couple of Med Gulls and seven Ringed Plover.  I wonder if this so-called hurricane will blow anything more interesting in...

An early morning walk down to Seaton Marshes would have proved quiet were it not for the recent Cattle Egret. It was showing well from the hide with the cattle on the reserve itself, although the cattle didn't seem to like it very much and often charged it away! 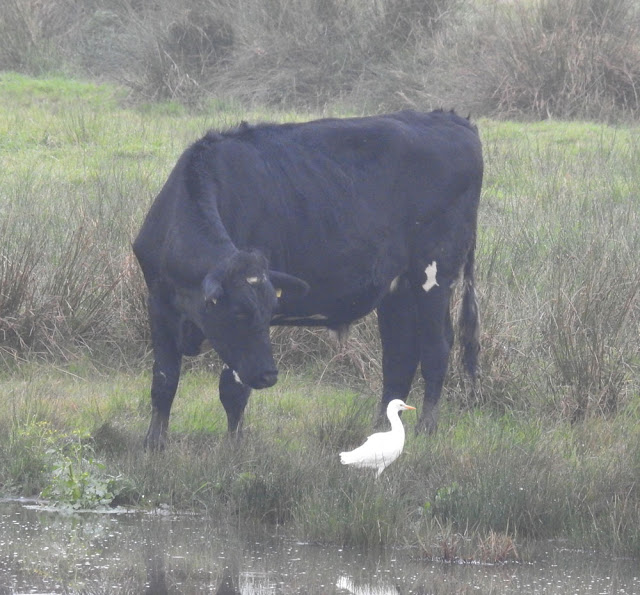 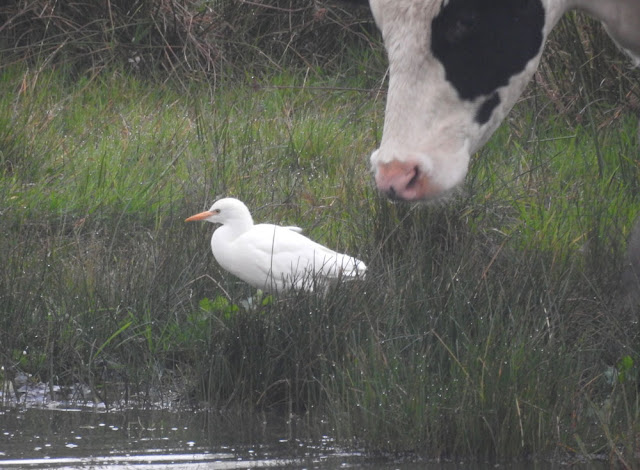 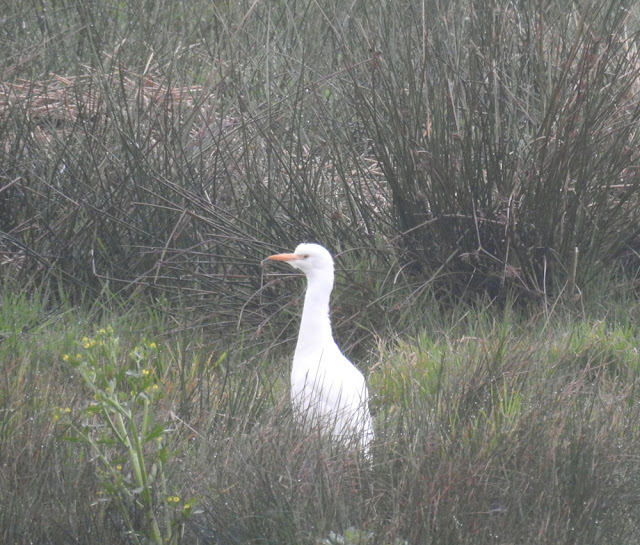 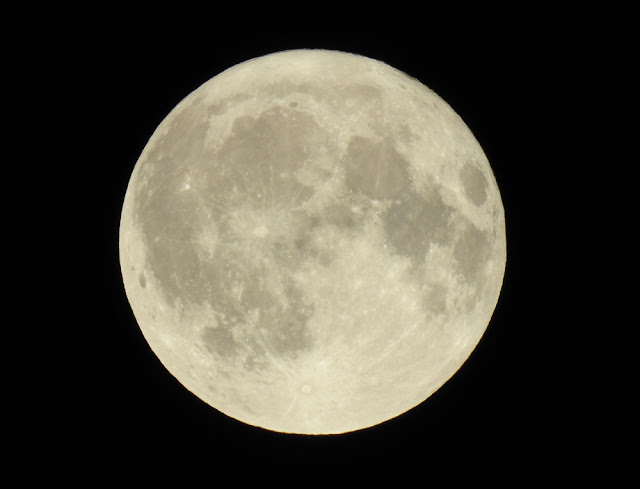 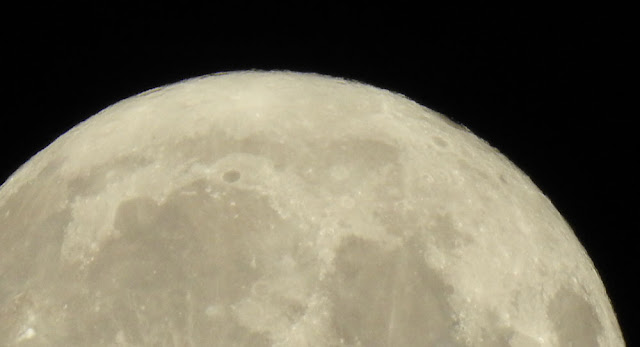 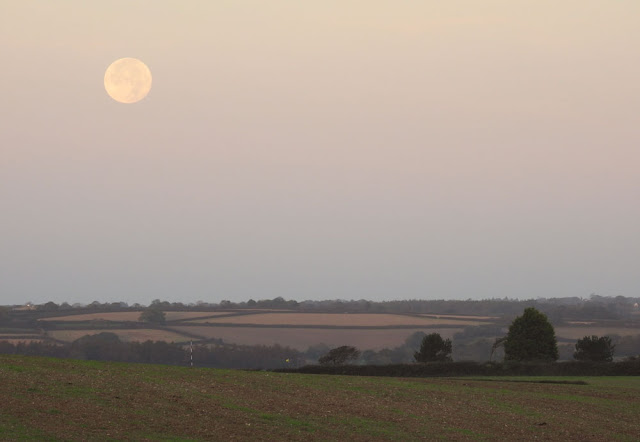 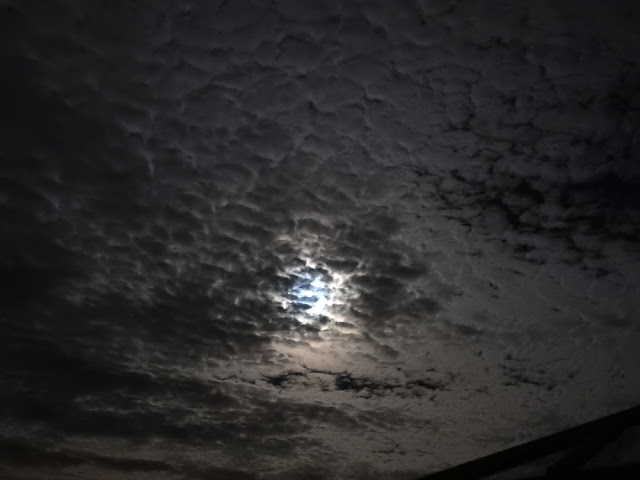