Thought I best bring you all up to speed before we get into April, when it will probably all kick off on the migration front...  mind you it looks like it already has!

I was at work most of today, so missed Bun's male Redstart on Beer Head and the Osprey that flew up river mid afternoon (seems to have been several of these arrive on south coast today). A quick look around as the sun set though showed a big increase of hirundines in the valley, with 70+ Sand Martins and about five Swallows feeding over Colyford and Bridge Marsh.

Yesterday morning I enjoyed leading a tram trip along the Estuary, with six Sand Martins north, a Wheatear (my first female of the year), a Greenshank, a Dunlin and two male Shoveler the highlights...

A couple of evenings prior to this I spent some time at our only remaining reliable Little Owl site. Great to see at least one still hanging on...

And that brings me up to date with my local bird news. April it is over to you...

Will post a local update in the next day or two, but in the meantime here's a few pics from a stunning family day trip to Dartmoor yesterday... 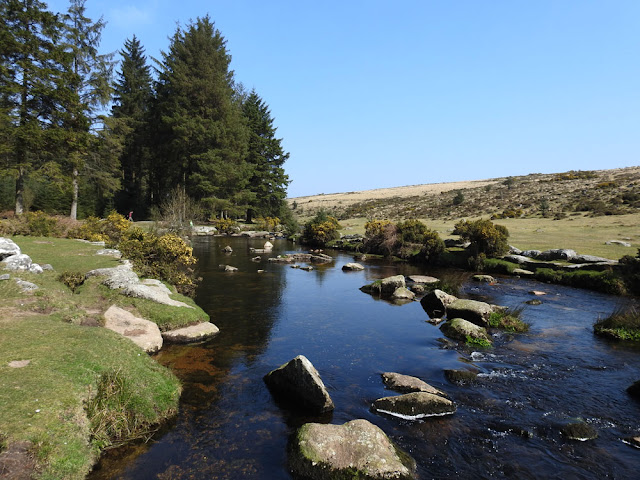 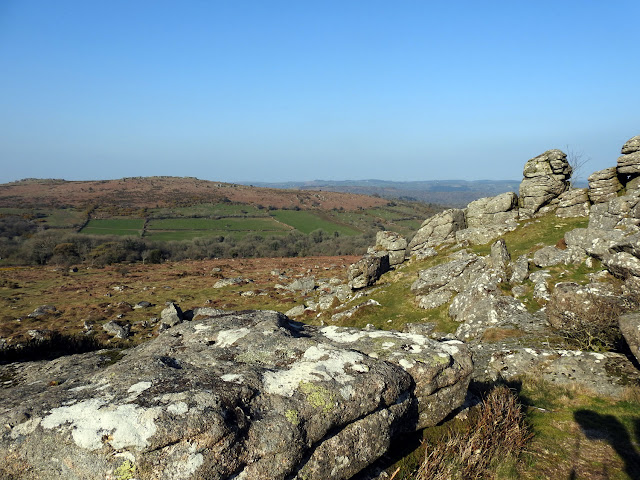 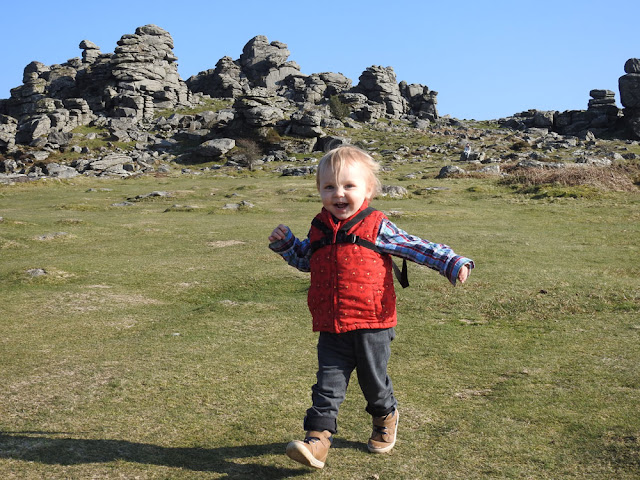 At least four Crossbills spent lunchtime with us, along with numerous Siskins, a couple of Dipper and a Wheatear.   Had one of those moments too of really appreciating a common bird. We all go nuts for spring Yellow Wagtails, especially the colourful headed varieties. But have you looked closely at at Grey Wagtail lately? Stunning... 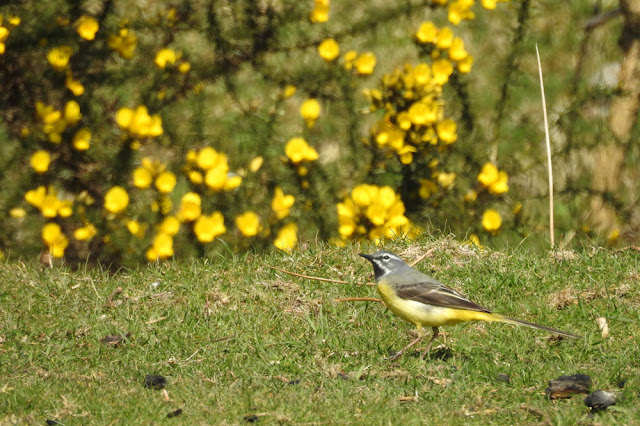 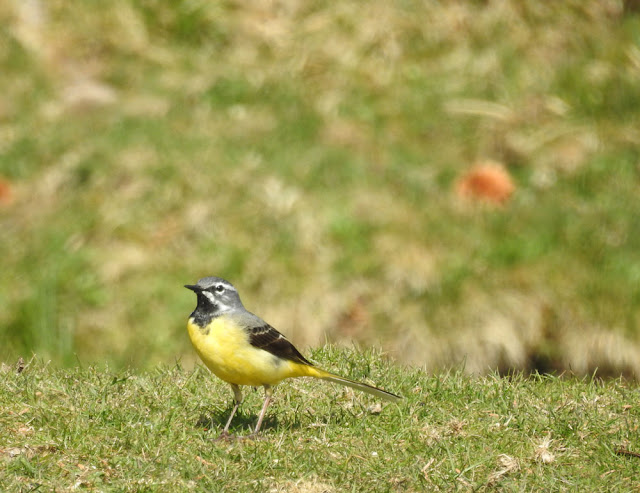 There was a fine end to this fine day, with our first Little Ringed Plover of the spring gracing Bridge Marsh... 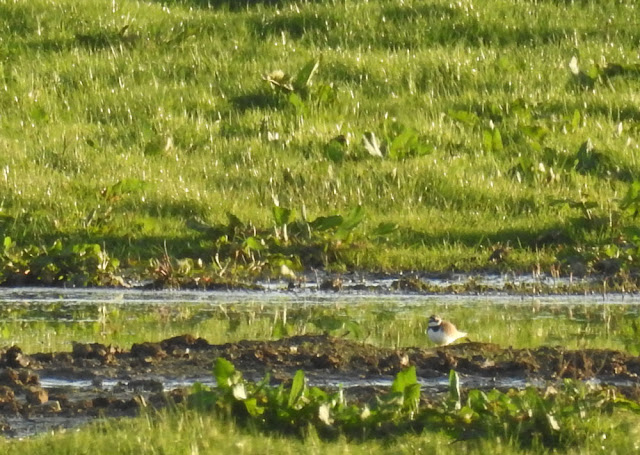 The distance didn't make it any less of a delight to see!  Still present at dusk.

A quick snoop around the patch early this morning showed a flock of 15 Sand Martin feeding over Colyford Marsh, but not a lot else...

I had two more trips out today, late morning and late afternoon, with gulls being the main focus. Among the 120+ Common Gulls on the Estuary were five Med Gulls (one first-summer, two second-summer and two adult summers). There weren't big numbers of large gulls on show today, but they did include this first-summer Caspian Gull*... 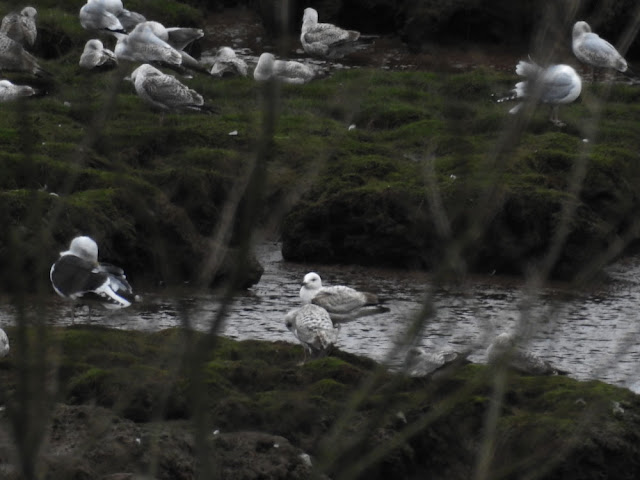 First views showed exactly what can be seen in the above pic. A strikingly white headed and breasted first-year gull, with extensive (almost complete) grey saddle, solidly faded dark brown tertials, plain (although very faded) greater coverts, and narrow pink legs with comparatively long tibia.  Overall it was a sizeable bird too, larger than the surrounding Herring Gulls.

My views of it were shocking mind, as you can tell from the below pics... 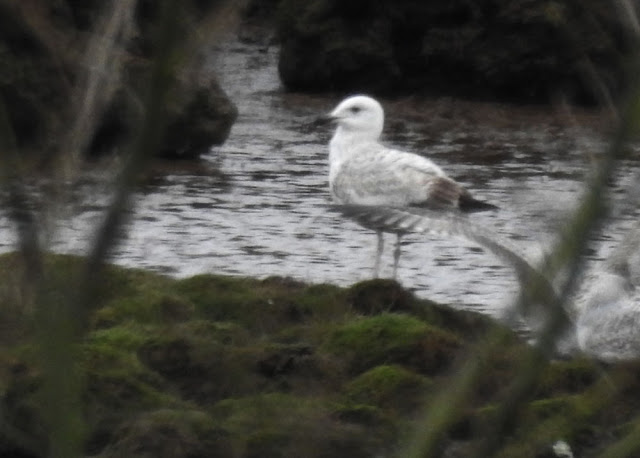 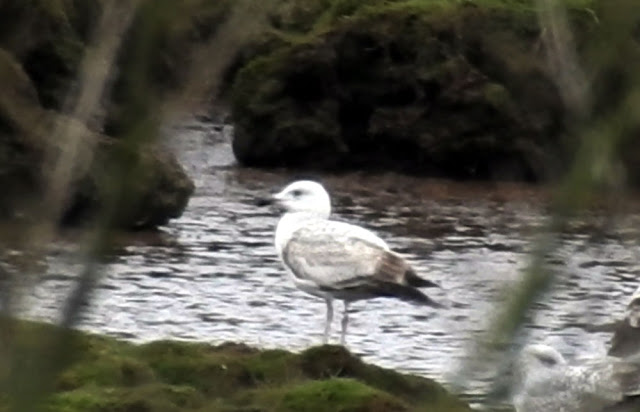 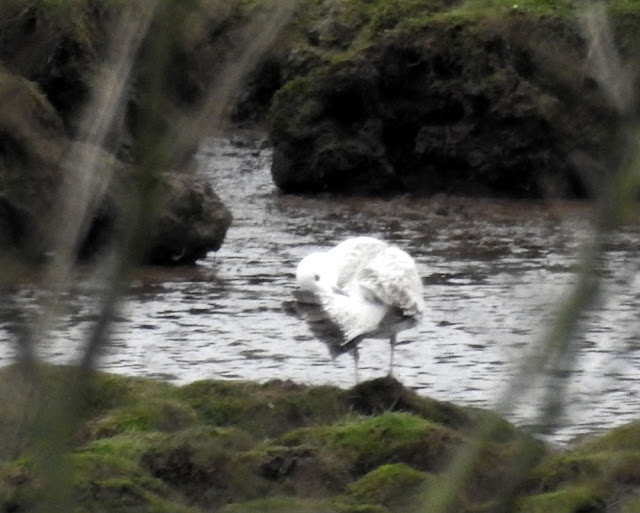 Frustrating I had to go before I'd even picked this bird up, so after ten minutes of watching it I really had to go!  But when I finally and begrudgingly did drive away, I suddenly realised how I may be able to get a closer view... 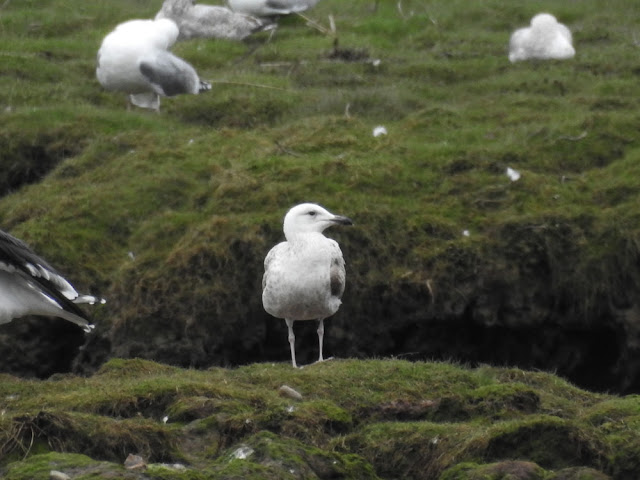 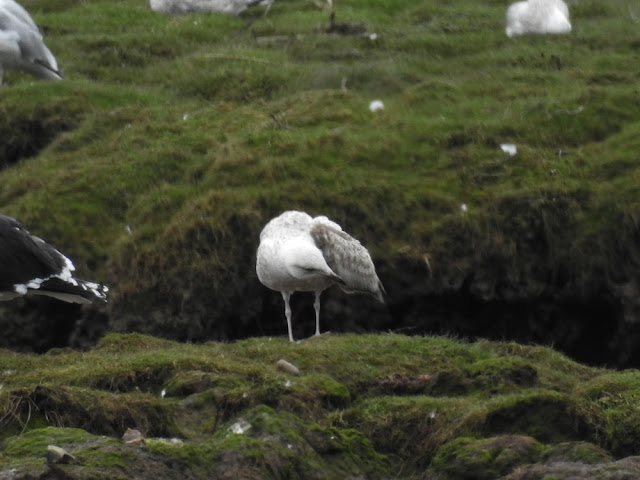 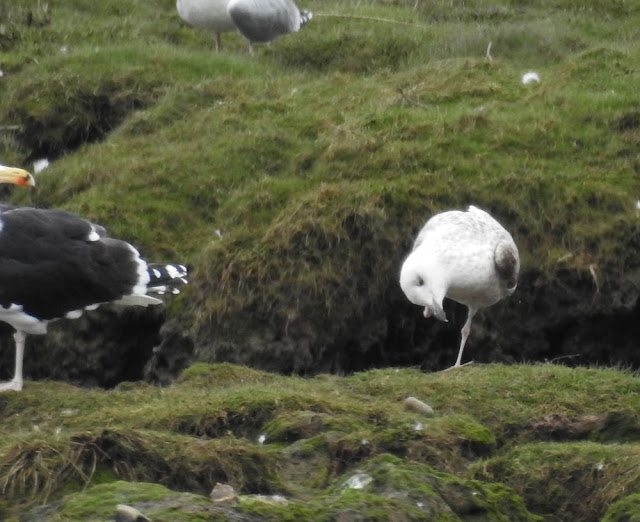 I desperately hope I or someone sees this bird again, because currently I'm just not quite happy with it.  I reckon if I'd been able to give it the time it deserved then I would have come away happy, but the bill size and shape, and dull grey mottling on flanks and belly are unsettling me...

Is it a big male Casp, or do these features suggest some Herring influence?  Any comments as ever gratefully received.

I am sure being with/married to a birder is not an easy thing at the best of times, but it can get treacherous on particular occasions that's for sure...

There are four birding events that make my wife shudder to the core - and I don't blame her.  If I'm not birding when any of these four things are taking place, then I am not a nice person to be with. And that's not something I have any control over. Shocking but true. The four 'birding events' being;

What I don't think the non-birder truly understands is that to create three of the above four events everything has to be exactly right - like a complex jigsaw puzzle that fits together probably only for a single day, and then possibly not again for months/years. The weather needs to be right, the time of year needs to be right, and the birds need to be there - but sometimes even when those three do marry up it still doesn't happen, so when it does happen it is not to be missed.  If it is being missed then I simply don't want to be wherever I am at that time, I want to be birding.

And why have I written all of the above? Well today one of my four 'birding events' happened... Gulls!  Mid March, a strong south west wind with plenty of rain and 100% cloud cover - all absolute classic conditions for big numbers of Gulls on the Axe.  Miraculously once I'd seen the forecast last night, our plans for a 'lovely Saturday out' suddenly changed to us enjoying more of a 'stay at home' day.... funny that :-)

My first look along the Estuary mid-morning showed about 210 Common Gulls, two Med Gulls (second-summers) and best of all this lovely second-summer Yellow-legged Gull...

The Yellow-legged Gull remained on the Estuary all day, as I saw it during both the afternoon Estuary scans.  Mid afternoon there wasn't much else to add, but a look along the Estuary from 17:30 showed a massive increase in smaller gull numbers - now six Med Gulls (ad, 4 2s and 1 1w) and an impressive 620 Common Gulls.  The mind boggles at how many of these have probably passed through the patch today!

And just to finish this post, so I can reclaim some brownie points by doing the dishes, I saw my first Sand Martins of the year today. Three were feeding over Lower Bruckland Ponds mid afternoon. 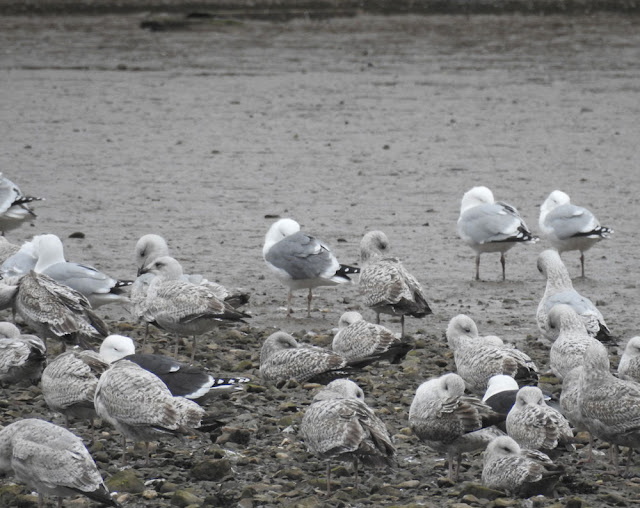 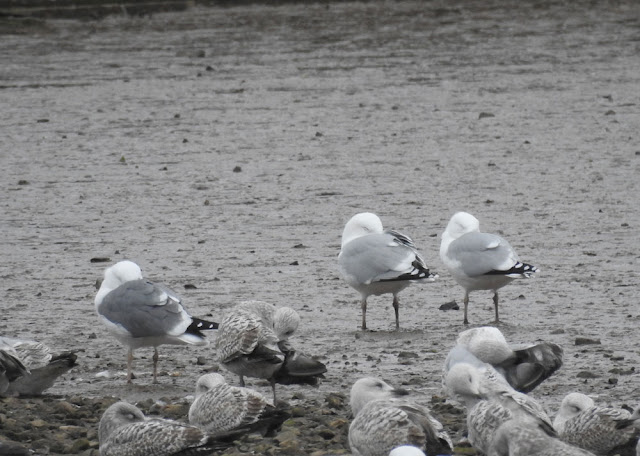 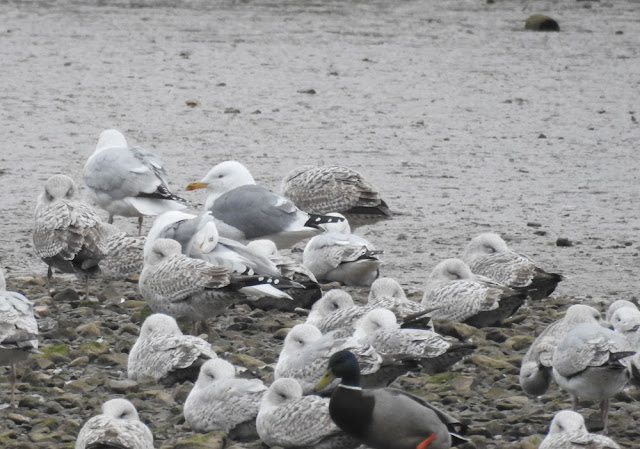 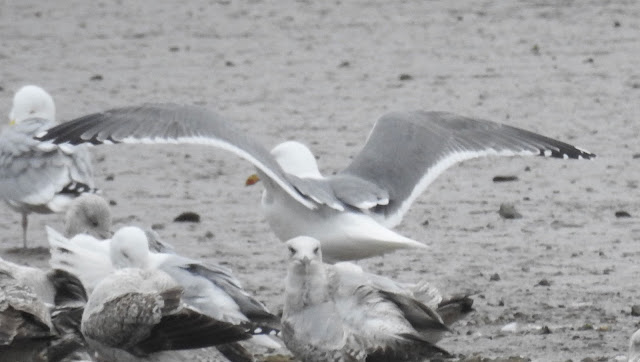 A message from Clive mid afternoon yesterday alerted me to the presence of our first two Wheatear of the year on Colyford Common. Yeah finally some spring migrants - I really do not know how we've missed out on all the early hirundine action here!

I got to Colyford Common just before 5pm, and was greeted by the soul-lifting sight of three gorgeous male Wheatears. Here's one of them... 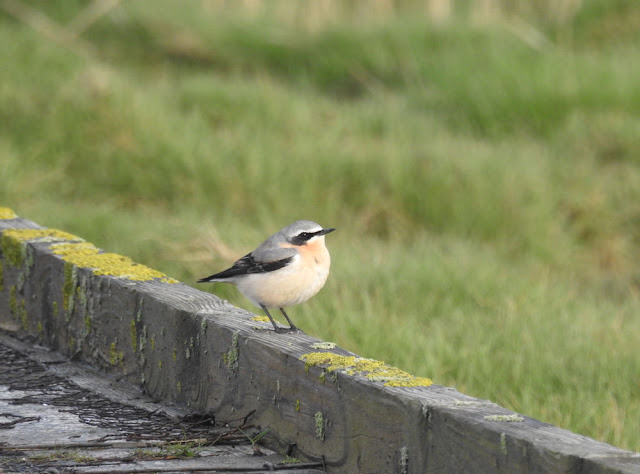 These early ones are always so strikingly small, dumpy and pale compared to the tall orange breasted Greenland/Iceland birds that move through from mid April. Over the course of a year I'm sure we actually see many more of the larger brighter birds than these small presumably UK breeding birds.

It was clearly a fairly good migration day yesterday, as there were also a few new Chiffchaffs dotted around the Marshes. And today Ian Mc has seen our first Sand Martin of the year, so hopefully this means the flood gates have opened...

A good storm often produces an oddity or two, whatever the time of year, but Tim Wright took that to a whole 'nother level at about 3pm this afternoon  Not so much on rarity-value, just pure whackiness...


Yes, that's three Mandarin sat on the sea!!  There's not been a Mandarin anywhere on patch since July 2013, prior to this I've seen four or five here, but none - as you'd expect - on or over the sea. What a bizarre record, and thanks for the message Tim. I would love to know where they woke up this morning!?

60 Black-tailed and the Bar-tailed Godwit, five Dunlin, 90+ Common and 14 Lesser Black-backed Gulls were on the Estuary this afternoon, but I couldn't manage anything better. I've still not seen a summer migrant yet, which in an average year I would expect, but this year I feel a bit cheated.