Been doing some outstanding jobs in the garden this morning, but had an hour out from 10:20.

From Spot On the sea was a bit more lumpy bumpy, and I couldn't pick out any Grebes other than Great Cresteds. Seems to be a few more duckies on the move at the moment, with small numbers of Common Scoters bolting both ways, and three distant Shovelers (2 drakes) past west.

A sweep of the estuary gave the pale Iceland Gull and two adult Med Gulls including a green colour-ringed bird. I think this is a new colour for me, no chance in reading it tho as it was way too distant. It was encouraging to count 24 Lesser Black-backed Gulls, my highest count so far this year - very promising indeed! 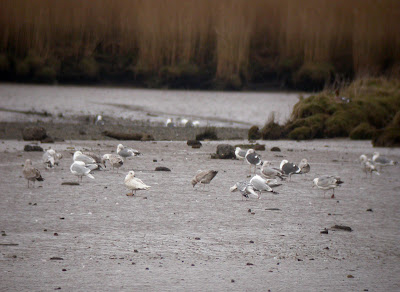 An average Axe Estuary Gull flock!
Blackhole Marsh has been drained again, but the habbo there looks superb! Loads of small pools and short reed-stuff, there were a couple of Grey Herons and Little Egrets feeding and a couple of Green Sands flying about. I just wish it could be like this in September - it would be covered in Pecs!

The mystery visiting birder has been sighted again, on Beer Beach. And he DOES have a name... HELLO MIKE : )
Posted by Steve Waite at 11:45