Let It Snow Some More!

Loads more snow about at dawn this morning, though most had thawed by mid morning despite a several more wintry showers. 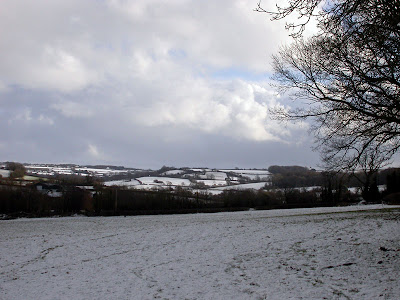 Looking east from the hill above Lower Bruckland Ponds
A bit of cold weather movement has taken place, the most obvious being the c140 Golden Plover with Lapwings opposite Stedcombe Manor. Also two Gadwall on the estuary with the two Tufted Ducks still. A huge female Peregrine was sat on Colyford Marsh early afternoon. Another look along the estuary later on this afternoon alongside Dave and Andy from further west revealed 22 Shoveler and five adult Med Gulls. One was red 5P5, and another was a new bird with a very well developed hood.

The sea was quiet, with just a few Red-throated Divers flying back and forth. Karen had more luck later on. A look over the pig fields gave me a headache! There were thousands of large Gulls flying around following the pig food, I spent half an hour looking through them with no reward. 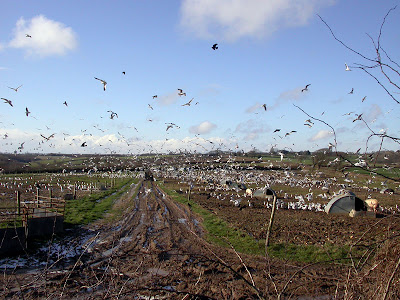