Woodlarks And Another White Winger

Started the day with a seawatch, arriving at the Spot On at 08:00. There wasn't much on the move, except for a fairly constant movement of Gulls (both big and small) heading west.

At about 08:20 amongst a small group of large Gulls that had just come over the horizon, some white wing-tips were gleaming nicely in the sun - it was an Iceland Gull! The bird was young'en which looked quite pale, it appeared to pick something up off the sea a couple of times but otherwise went through rather rapidly and continued around Beer Head - excellent!

One other huge highlight for me after the gripping I got from Karen a few days ago, a flock of 12 Pintail flew past west, albeit rather distantly. Apart from these two highlights, and about 15 Red-throated Divers, it was all quiet. Then at about 08:40 Phil phoned to reveal he most certainly retains the 'Woodlark crown', he had one over the fields near Axmouth. So I left Spot On and headed straight up there, it took me a fair while though, snow and ice everywhere!

I met up with Phil, and within moments a Woodlark appeared overhead and landed right in front of us, allowing me to take this photo.... 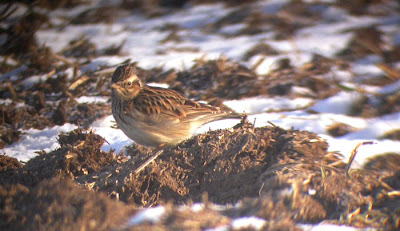 Stunner!
Karen turned up, and soon after Phil picked out a few more birds scuttling about in a nearby field, all Woodlarks - 17 of them! Our flock is back! For people who don't know what I mean by saying 'they are back', last January after my Dad had a single Woodlark near Axmouth, Phil turned up a flock of 22 though they disappeared towards the end of the month. Then for the rest of 2008, and Jan 2009 no sign - but they are here! Great news! Also a flock of 400 Skylarks were in another field - an impressive sight!

We all left together, Karen heading east, Phil and I west. The roads were a bit dodgy, but as we were coming down the hill towards the main Axmouth road, I had to stop for this.... 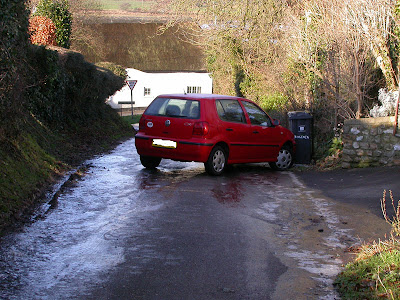 Oh dear!
As I stopped, Phil behind me also had to stop - though he skidded a few feet first! We had stopped on a blanket of ice, on a rather steep hill, ******! 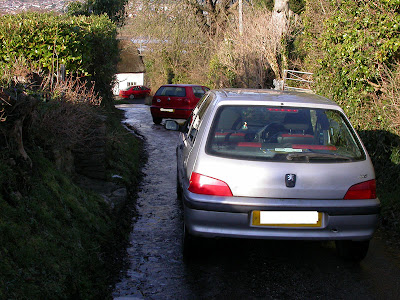 Totally snookered!
Luckily, we were outside Bun's sisters house, who Phil knows well. And there was some ground salt nearby. So Phil set to work, at first allowing his car to back up - then mine. It took about half an hour. 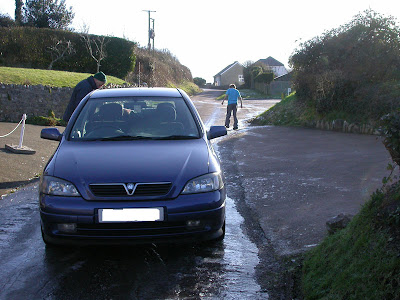 It was pure ice - I nearly fell over on countless occasions!
From here, a look along the estuary gave five adult Med Gulls, including 'white 3P65'. I last saw him on 26th Jan, when he had the usual winter head pattern, he now looks like this.... 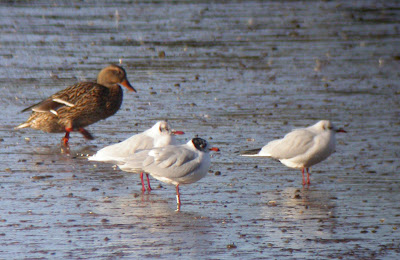 Well on his way to fine summer wear
What a brilliant morning of winter birding - am real glad work phoned early today asking if I'd swap my day shift for a late!
Posted by Steve Waite at 10:54