Get The Red Carpet Out

I joined the Axe Estuary Ringing Group again this morning on Seaton Marshes, I was a little late as I had been enjoying a rather lovely adult Little Gull flying up and down the beach off the Spot On.

Anyway, this morning the ringing group had company.....a BBC Team, including....CHRIS PACKHAM!!! I left as they joined us so can only claim distant but good views of him. This got me thinking of other telly wildlife people I have seen in the flesh, and this is my 'list'....

Bill Oddie: This is the most boring one as I knew he was going to be here, at the Rutland Birdfair (on the same day I ticked Great White Egret!). Good close views obtained, he was wearing a very loud shirt!

Simon King: A right 'jam' this one! Whilst birding with Dad on the Levels, we bumped into him as he was on his way to film Badgers. I recall wandering off and looking about whilst Dad was chatting to him so I can't have been that impressed.

Nick Baker: He was by far the best, a thoroughly lovely chap. Dad and I were on Dartmoor, and went to a site near Warren House for a Hen Harrier roost just prior to dusk. When we arrived there were already two people waiting for the birds, Nick Baker and his girlfriend! WOW! Spent a lovely evening watching the Harriers and chatting away - a totally sterling chap! And he knew a lot, in general and on a local scale.

Nick Baker (again): A little over a year later, Dad and I were out birding again, this time at Dawlish Warren. When we got to the hide a flim crew were outside filming Nick talking about Oystercatchers. After the filming we got chatting again - he remembered us from Dartmoor! We then helped him and his crew carry all the recording gear back to the vans.

One thing that surprised me most about these people, and the same goes for Chris today apparently, they do actually know HEAPS about birds/wildlife. The have genuine passion and interest. Right, next on my list and one that I am VERY VERY keen to 'tick-off'..... Michaela Strachan!!!

Now to birds from today.... I have already mentioned a Little Gull, well just after I left Seaton Marshes I went to Seaton Hole. Here there were two adults offshore. At first one was really close, so I rushed down the steps with my camera (2x converter attached). It stayed close for another minute or so before moving further out to join the other bird. I fired a few shots off, they were always going to be pants, but hey, why not! I do LOVE Little Gulls!!! 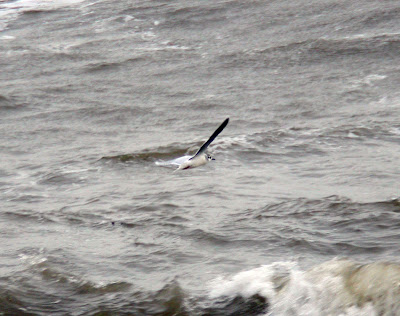 The closest - but at a rubbish angle 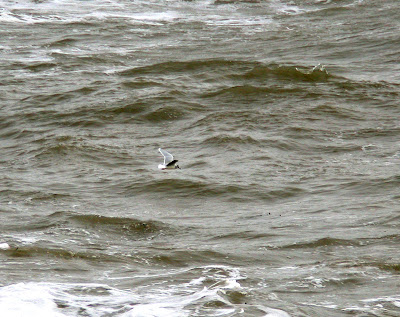 More distant - but a better angle

'Pants' - but looks very atmospheric I reckon....
And that's about it from me today, so yes - this was mostly a post of drivel!!!
Posted by Steve Waite at 22:38