Im afraid the title is true....Gulls, Gulls, Gulls.... all good ones though - I promise!

I totally jammed a couple of adult Little Gulls on Friday morning. I was sitting with Kym in the shelter along the sea front at about 09:20. The waves were huge and weather proper naff! A small group of Black-headed and Common Gulls came flying past east just off the beach, and behind them, two adult Little Gulls! I didn't even have my bins with me, which was actually VERY annoying!

Imagine my delight then when the following day after several texts I was watching five adult Little Gulls off the sea front at about midday - through my optics! Cooooool! Such smart birds, I really have a soft spot for them.

Then to today's Gull, half hour before I was due to finish work, Nick texts me with news of a white-winger on the estuary by the tram sheds - an Iceland Gull. When I clocked off at 16:30 I went straight round to the estuary, greeted by the Backwater trio of Bun, Karen and Ian M. I was also greeted by this.... 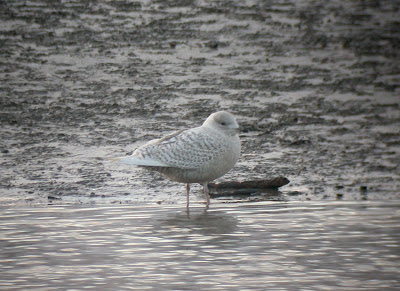 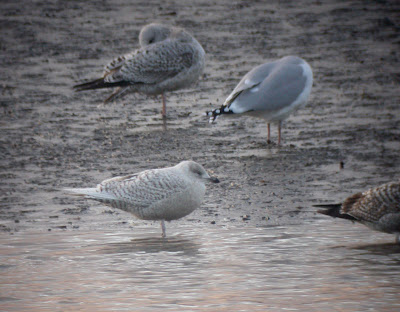 Looking sleepy
When I got there the light was a bit rubbish, but the bird was fairly close. As you can see it is a very well marked bird, and is our fourth of the year already!

Now this is the weird thing. I left it and carried on up river, taking my time checking every flock. I got to Coronation Corner and started scanning the Gull flock here. Three scans later, there's an Iceland Gull! It was a dark well-marked one, with a bill pattern exactly the same as the bird I'd just seen. A look back down by the sheds gave no Iceland Gull, so I'm certain it is the same bird. There you have it - Gulls can and do fly upriver at dusk!

I'm off to Plymouth, due back tomorrow though for some more Gull-action...I hope! Glonk Glonk Glonk PLEASE!
Posted by Steve Waite at 17:37