I returned home from my romantic weekend away yesterday morning, spent a couple of hours in the field then went to work (yes - I worked on a Monday!). This morning I've had a look about and am off to work this afternoon. Tomorrow - day off! : - )

The patch remains quiet; the sea has little on it, wildfowl numbers are low and few passerine flocks are in the fields. All that leaves is Gulls, and there's stacks of them! Nothing different yet though....apart from Iceland Gulls!

Yesterday at 13:30 there were an impressive 12 Med Gulls on the estuary, including a second winter and three colour-ringed adults; the two I've mentioned before on this blog and a new one - 'Red PAR7'. At 09:00 this morning, despite not all that many Gulls about - there were still ten Meds on show. Here's four of them..... 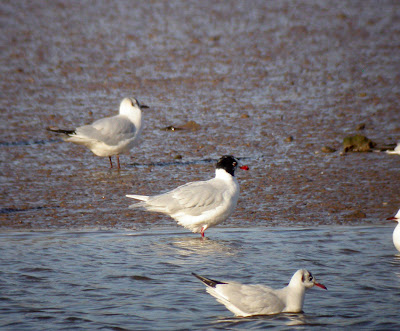 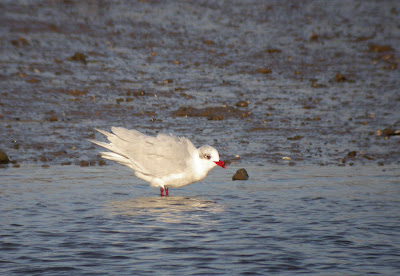 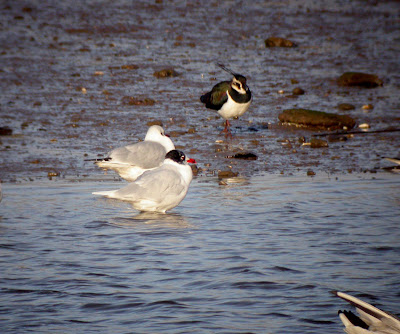 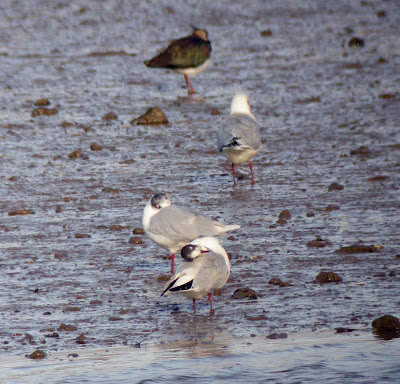 I've already mentioned about the sea, and it has really poor since the rough seas and big waves last week. Yesterday morning a short watch gave nine Great Crested Grebes, three Red-throated Divers and three Common Scoters. On the upside though, a further 16 Common Scoters flew west - the biggest flock I've seen here for ages - and there are still lots of auks out there, mostly Razorbills and mostly very distant, but one flock of 34 flew really close east.

With all these Gulls about a rarity can't be far away, hopefully better than a Ring-billed....
Posted by Steve Waite at 10:40