Spent all day in the field, and have had an excellent day's birding! Not seen anything 'new', just lots of winter goodies.

I had thought my day was going to be a car-less one, so I had planned a birding walk after I dropped my 106 into the garage at 08:30. Why did it have to go to the garage I hear you ask? Well anyone who has heard its engine over the past couple of months will know why! It rattles, squeals and squeaks! Well, it did! I'm pleased to say 'it don't no more'.

Anyway, from the garage I walked to Seaton seafront, and settled down just west of the main roundabout. Pretty quickly picked out the young male Surf Scoter which was still settled off Beer, it was distant, but it was also my fifth on patch Surfer; certainly the most fat-headed one! As I haven't really looked at the sea at all this year, everything I saw was a year tick! Gannet, Fulmar, Razorbill, Shag, Common Scoter (three), etc....excellent! Think I scored with a patch record too, with 19 Great Crested Grebes in the bay. Nine Red-throated Divers (also a year tick) were nice, five sat on the sea with four more past east. On the horizon some large flocks of auks were whizzing past, but none were identifiable, or should I say, ALL were Black Guillemots!!! Walking along the west walk I nearly tripped over another year tick, a female-type Black Redstart, and a Peregrine flew east overhead.

It had been an hour since I had dropped my car in, and my phone rang, it was the garage (all sorts of things were going through my mind at this point, like "we are sorry Steve, your engine has been shredded to bits!"). I had no need to worry, in fact I had good reason to be VERY happy, the voice on the other end actually said "all done Steve, £23". WOW!!

Next stop was a frozen Seaton Marshes, with 20 Shoveler, a Common Sandpiper and two Chiffchaffs being the only notable birds on show. A look over Blackhole Marsh revealed more frozen water! Not many birds other than non-rare Gulls and a small gang of Black-tailed Godwits, but the scene was nice. 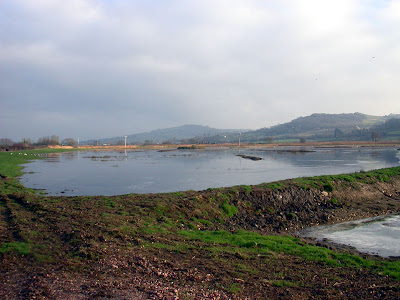 A couple of crumpets later I was on the road again, and headed for Farway. Much fewer birds up here than the other week, but one of them was a Brambling - another year tick! Lower Bruckland Ponds gave the male Tufted Duck still, and a Bruckland rarity - a single Shoveler. I followed this with a walk in the salt marsh north of Coronation Corner, no Jack Snipe again, but eight Common Snipe, two Water Rails, a Green Sand (year tick!) and a couple of Rock Pipits. On the estuary itself were three lovely Med Gulls, two adults (one a really hefty individual) and a second-winter. 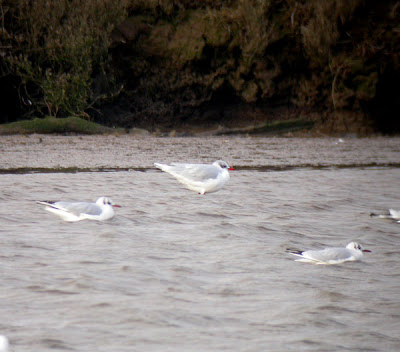 The only slight hint of anything mediterranean today!

Then, I needed more food. It was lunch time! And what did I eat? A turkey sandwich...what else!?? Beer was my next destination, for what was probably the most jammiest five minutes of birding ever!

I pulled up on the beach, and immediately picked up the Surf Scoter again. I'm not sure of its age to be honest, it is more advanced than the previous two first winter drakes I've seen at this time of year. But still, he has a fair way to go 'til he's a proper man! I'd like to see his belly before I place my bet. Anyway, back to my 'jamming session'! Whilst peering at him through my scope, the left corner of my right eye noticed a movement next to my left foot, it was the semi-resident Black Redstart saying hello! I packed my scope away and walked up to Jubilee Gardens (where so far this winter I've failed to see any Firecrests!). In the first tree I came to, a crest calling from the canopy soon showed itself to be a Firecrest! I had lovely views of it for a minute or so before it disappeared deeper into the tree. Then bang on cue, Kym phoned requesting my company - perfect timing!

This wasn't my birding day over though, I spent the last half hour of the day at the farm gate. The only surprises were two sightings of Golden Plovers. Seven flew in and landed on Colyford Marsh with a flock of Lapwing, then a flock of 29 flew high down river. Finally, to round a very enjoyable day off, I tucked into a yummy Chinese watching a VERY old lady win £75,000 on Deal or No Deal!! Now that would be nice.....
Posted by Steve Waite at 18:30