An Hour At Midday...

...was all I had time for today. It was flipping cold!

44 Golden Plover were just north of the A3052 at Bridge Marsh. There were Lapwing everywhere, even some on Axmouth football pitch! Also excellent numbers of Fieldfares and Redwings. 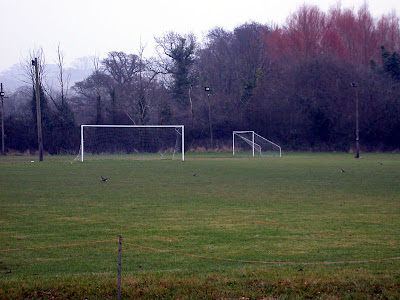 I gave Kilmington Sewage Works a look, and it was heaving with birds! Mostly Pied Wags and Meadow Pipit but also 25+ Chiffchaffs - all feeding on the filter beds. One of Chiffs was a nice pale grey bird, but appeared to have a slight olive tone to its rump and uppertail so not a 'classic' tristis.

On the way home, a scan over the decent collection of Gulls on Blackhole Marsh showed an adult Med Gull. Then it was home time!

I had a bit of a shock when I logged on to Birdguides this morning. 'Hawfinch - Colyton - in private garden on edge of village at 10:30'. WOW!!! If anyone knows anything about it please get in touch!