At 02:00 this morning, I picked up 'Bun' and Karen and started on our trek to the UK's winter birding hotspot - Norfolk. After a good journey (with me stuffing my face with sweets, crisps, Snickers and Red Bull, whilst Bun was sat quietly in the back chomping on Go Aheads and rice cakes! Someone feeling the Christmas binge?) we arrived at our starting destination, the fields around Welney WWT at exactly 05:59. For the second year in a row we had arrived way too early, so had to endure a long wait before day-break, even my cries of "it's getting lighter!" every five minutes didn't help! Despite it still being dark, several species were already on the trip list... Tawny Owl and Grey Heron were added during the four hour journey, and whilst waiting near Welney the calls of Whooper Swan, Wigeon and Mallard filled the air.

Soon as the sky became lighter swans started to stream out of the WWT reserve, most seemed to be Bewick's, but some Whoopers came over too. They all headed in the same direction, south (I think!). Also of note, and in true Norfolk style, within half a mile we saw four Barn Owls! We then moved south a little, just over the Cambridge border to Pymoor, where a Great White Egret had recently been reported. It was FLIPPING FREEZING stood on top of the flood bank, but the water was absolutely FULL of birds - it was quite simply a spectacle. 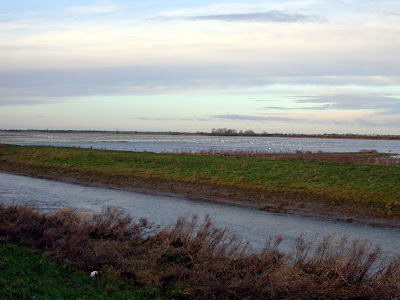 The edge of the Wash - not Blackhole Marsh I'm afraid to say!
The mass included hundreds and hundreds of Swans; a mixture of both (plus a few Mutes to complete the set), and thousands of ducks including Gadwalls, Pintails, Tufted Ducks, Pochards and some gorgeous drake Goldeneyes.

Wild Swans are SO cool!
The Egret didn't play ball though, and we left without seeing it. This turned out to be VERY annoying as about an hour later it came over the pager services. Bums!!!

The next hour and half spent looking for a Rough-legged Buzzard just down the road near Coveney also turned into a dip, but two Common Buzzards were noted. We left here at 11:00, according to the pager services, it was seen at about midday. Double bums!!! Double dip even!!!!

Next stop, via a triple lap of 'The Golden Triangle' where we saw a Jay, a Pheasant (Common!), an empty Lucozade bottle and a discarded beer can, we headed down to the Fincham area. Tree Sparrows were the target, and they didn't disappoint! Although at first they appeared to be nowhere, at least nine emerged and gave us some super views. From here we headed up to the north coast. 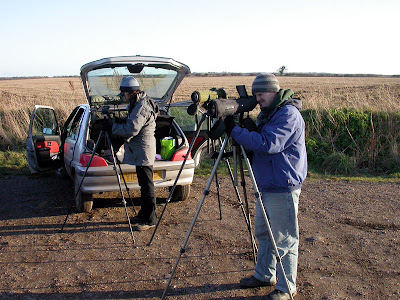 Look who it is... Backwater's Karen and Bun!
A mile or so inland of the A139 (north Norfolk coast road), skein upon skein of Pink-feet were landing in one field on the summit of a small hill. This field could not be looked into though despite turning down every lane and stopping in every gateway! We enjoyed some flight views before joining the coast road just east of Burham Overy. We travelled all of about ten feet on the A139 before pulling in and scanning over the marshes. A flock of c600 Golden Plovers were impressive, a male Ruff fed with a flock of Lapwing, our first Marsh Harrier of the trip quartered over a reed bed, and then there were the Geese! Pink-feet were constantly flying from the marshes to the field I have just mentioned. But then, all of a sudden, all the Geese in said field must have been flushed, as the entire flock flew back north onto the marshes. Wow! What a sight! 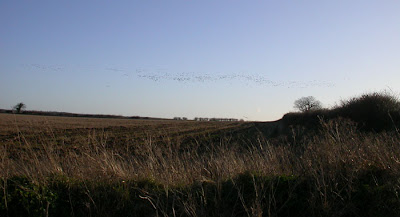 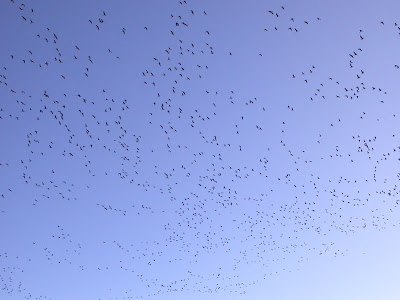 Then they fly over us!

We loaded up and I drove us off east towards Holkham. We had barely been going for a minute when I noticed a couple of birds in a road side hedge ahead of us.... WAXWINGS!!! I continued to the next gateway then under took a rather 'rash' three point turn in which I drove straight into a huge lump in the ground removing my front left mud guard! Still, I carried on, and luckily bang opposite the Waxwings was a nice wide gate way. We had superb views of EIGHT of these beauties feeding on Rose Hips just across the road from us. I got the camera out and one sensed this so flew onto overhead wires calling. I took three pictures before they all flew up and off towards a farm north of the road. Here is my best pic... 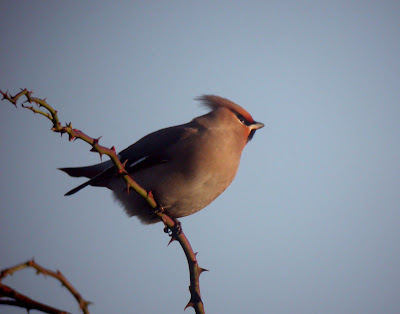 The only caption I can think of for this pic is... 'WOW!'

After collecting and re-fitting my disconnected car part we spent the remaining hour and a bit of light looking from other spots along the coast road up to Cley, then back to Holkham. We added another six Barn Owls, two Marsh Harriers, tons more Pink-feet, two Egyptian Geese and a nice pair of Grey Partridge to the day and trip list.

After dark we booked in to our B and B, The Cobblers in Wells, and at half six went for a meal in The Bowling Green Inn. All seven of us enjoyed a nice meal.... Seven I hear you ask!?? Yes, well it just so happens that Dad has come up for the same few days with three of his mates, one being the Backwater's John Chambers, of Hawfinch fame!

Certainly time for sleep now, can't wait to see what tomorrow brings...? Rain and wind in the morning I reckon!
Posted by Steve Waite at 17:49