First Fluff Of The Year

If only it was the last one too!!

Spot On Kiosk this morning, I got here at 8am and the moment my eye met my scope lens a small group of Common Scoters flashed through my view distantly heading west, with something else in with them! It looked the right size, shape and colour for a female Long-tailed Duck, in fact I know it was one, but as I only saw it for a total of about three and a half seconds as the flock kept disappearing below the waves i'm not going to 'claim it'*. I phoned Gav and he glimpsed it too, but he also saw it too briefly to do anything with. Hmmmm.... Bums!

I stayed here 'til 09:30 and notched up: 24 Red-throated Divers, 17 Common Scoters and two lovely adult Med Gulls which came in separately from the east. There were good numbers of Kittiwakes and auks on the move with lesser numbers of Gannets and Fulmars passing.

I've seen little on the estuary today, well little of note, just one adult Med Gull, an out of place adult Kittiwake and the female Pochard. The Greylag Goose remains with the Mute Swan flock on Bridge Marsh with the Egyptian Goose here too.

Tonight myself and Bun watched the upper estuary for anything coming down river to roost. Two Green Sands belted up the Coly, and a couple of Ravens were eyeing up a dead sheep, but other than that it was rather quiet. 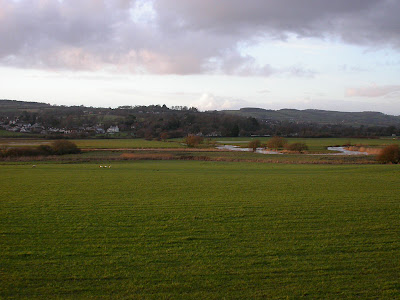 The Coly and Axe at 16:45 today
We ended the day in Musbury watching a Little Owl sat in a small tree. After a few minutes it started calling, and continued to do so 'til we left. A lovely way to end the day.