Apart from the yummy breakfast, the day didn't start too well! It was wet and windy, the first thing Bun did was walk into a wall in our room (must be all those rice cakes he's eating?), and then just after we drove off - that mud guard we repaired yesterday - it fell off....and then I ran over it! Ooops!

Things soon got better though, with a scan over the beach just west of Weybourne producing this.... 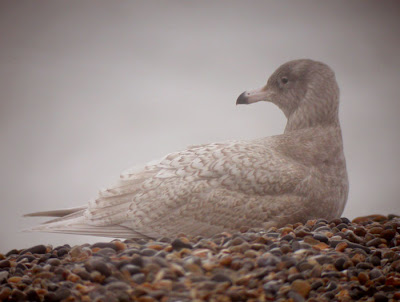 A huge and stunning Glaucous Gull
This bird has been here for ages, it's got a dodgy left wing but otherwise looks fit and healthy. 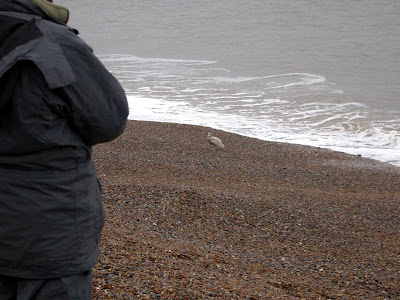 Karen enjoying a bin-full of Glonk
At Salthouse our first two Snow Buntings of the trip flew over, and on the sea were several Red-throated Divers and Great Crested Grebes.

Next stop was Holkham Gap, and our Snow Bunting count shot up. A flock of c80 kept us entertained, especially Karen - the only one she's seen before was the bird on patch at AYC a few years ago. 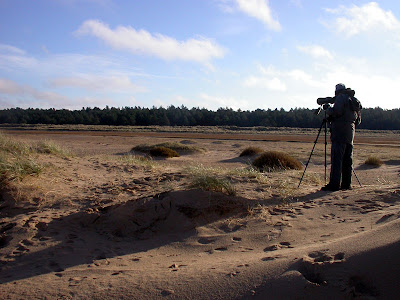 Karen again, this time enjoying a scope full of Snow Bunts!
I found them (as always) impossible to photograph, so tried a video. It is shabby and shaky, but there's a nice male worth watching it for!

Also on the land here were a few Rock Pipits, several Skylarks and a small flock of Linnets. Offshore there were several parties of Red-breasted Mergansers, loads more Red-throats and Great Crested Grebes, a single Pink-footed Goose (!!?) and a huge raft of Common Scoter - c350 in all. A nice highlight came when a flying group of Scoters revealed the presence of a Velvet amongst them.

We moved on to Titchwell, driving past the flock of Waxwings we had seen yesterday in roughly the same spot, but only six today. At Titchwell, although it was getting colder there was still plenty to keep up busy. Waders included at least eight Avocets, six Grey Plovers, 23 Ruffs, three Spotted Redshanks and the usuals. No unexpected ducks, but nice to see good numbers of Goldeneye (both on the lagoons and on the sea) and a couple of Eider offshore. We heard a couple of Bearded Tits 'pinging' from nearby reeds, but they never showed themselves. On the feeders near the information centre a female Brambling fed and gave us another trip tick. 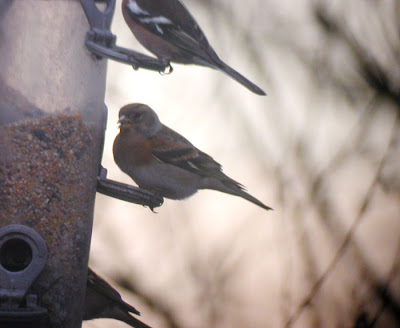 Sorry about the light - it was horribly back lit!
One last highlight to mention from Titchwell, a lifer for both Bun and Karen no less, and my first for yonks! Shortly after we had quietly settled down in the Fen Hide an incoming and fairly high-flying bird caught my attention. It was a Bittern! We had a superb flight views as it came into land just outside the front of the hide. Excellent stuff! 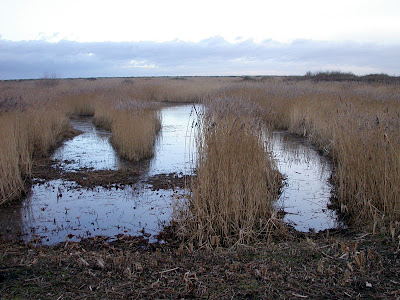 The view from Fen Hide, the Bittern landed just beyond the left hand strip of water
Our last birding of the day was from Lady Ann's drive, Holkham. A distant Barn Owl was surprisingly our only one of the day, and as ever the Pink-feet were fantastic to see coming in to roost. The highlight though came after all the other birders (include a mini-bus load!) went home. 14 Woodcocks flew out of Holkham Pines at around 17:00. Well, 13 did anyway! The 14th gave us superb views as it sat and waddled about in my car headlights as we were driving back along the drive. Great views!

Off to the Bowling Green now for a meal, tomorrow we are planning to head a little further south.

Reading back over yesterdays post there's one bird I forgot to mention. A single Corn Bunting sat on an overhead wire somewhere just inside the Cambridge border, so far the only one of our trip.
Posted by Steve Waite at 17:52