I broke my recent routine of working lates with a day shift today, working 9 til 6. I had just under an hour of light before work and used it as best as I could.
Lower Bruckland Ponds were still mostly covered in ice, but the female Tufted Duck still found enough water to swim in. Also 22 Moorhens feeding on the grassy banks!

After a look along the estuary I had a scan over the sea, which is where the title of this post comes from! If I was year-listing this year I would be very bothered by the fact I've missed a Goldeneye already in 2009. With the exception of last autumn's unprecedented run of sightings the patch averages just one Goldeneye a year, and Bun's bird briefly on Seaton Marshes last week could easily have been it. OR NOT!

Within seconds of starting my first scan, amongst a small gathering of Great Crested Grebes there sat a female Goldeneye. AWESOME! I fired the texts out, Ian McLean being the only to arrive whilst I was there. Shortly after his arrival it took off and gave us a wonderful close fly-by (at Sabine's Gull distance!) before plonking back down onto the sea off the yacht club which is where it remained 'til I left. This sea scan, and another brief one during my lunch break just after 14:00 produced six Red-throated Divers (including a tight flock of three drifting east), 16 Great Crested Grebes, eight Common Scoters, the drake Surf Scoter, and singles of Guillemot and Razorbill (the former a year tick!).
If you take a look at Karen's blog (link to the right), you will see how the front cover of my Christmas card to her came true.... Here's the Christmas card she sent me.... 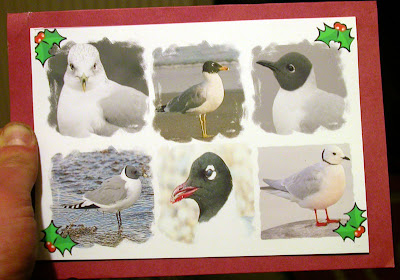 Let's hope this one comes true this year too!
Posted by Steve Waite at 19:00