It certainly is cold at the moment, with day temperatures remaining below the zero mark, especially yesterday! FREEZING! I've had high expectations on the birding front, but yesterday it was rubbish! Nothing really worth writing about despite spending four hours in the field. Today, a bit more interest, especially over the sea, but still falling short of what I'd like to be seeing (grey geese and wild swans by the ton!).

The river has not frozen over for ages, in fact the last time I remember it doing this was I think in 1996. And a rather nice pair of ducks were diving frantically in search of food in one of the few unfrozen sections... stand by for obvious patch gloat.... a PAIR OF SMEW! I even have a video of them, stunners!

No Smew today, but this was the view.... 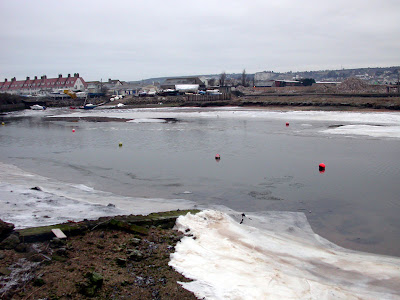 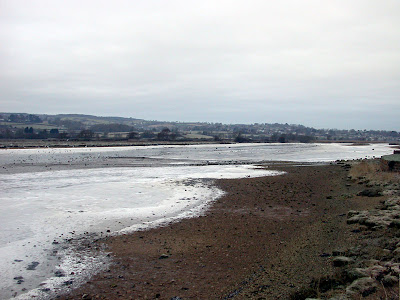 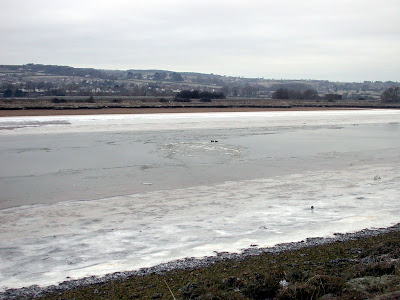 Nothing unexpected at all on show here, just a single adult Med Gull. But the previous 45 minutes I'd spent looking at the sea were much more worthwhile.

Passing birds were at a premium but did include two nice highlights: a single Pochard flew east just before 09:00 (a seafront tick for me!), and shortly after this an amazing flock of TWELVE Red-throated Divers flew high west. Another two Red-throats came through about five minutes later and four more were sat on the sea, which gives a Red-throat total of 18 - a decent total for here. A few more ducks were sat on the sea, namely the drake Surf Scoter off Seaton Hole still, also seven Common Scoters (with three more past) and slightly surprisingly, a pair of Gadwall!

Work now for the rest of the day, and for all of tomorrow. So that may well be it for me this week, keep warm everyone!

Lunch hour update
Well not quite it! Thanks to a call from Nigel Pinhorn, I just had a quick look out to sea to see a nice flock of 11 Gadwall off Beer. I reckon another patch record!
Posted by Steve Waite at 11:05