Time to condense three days into one post, which isn't actually that hard because I've not seen all that much!

This was the day of a major fund raising event for the Axe Estuary Ringing Group at the Town Hall. We did superbly and finished the morning £242.73 better off than we had started it with! Thanks to everyone who helped and everyone who came along to support us.

Before I was required to help here I had a quick look about, the estuary produced eight Gadwall, singles of Tufted Duck and Pochard and two adult Med Gulls. The sea gave a surprise with two adult Brent Geese sat close in - year tick! Also a couple of Gadwall and the Surf Scoter still. Another brief look over the sea later in the day produced an impressive 16 Red-throated Divers, with another five past west.

I must have got really badly lost on this day, as at dawn I was wandering around a Cornish moorland looking for a big white Owl!!!! The Snowy Owl never showed for me, or any of us there on Sunday. I see it's back today, so I predict another twitch coming soon! After lovely views of a very showy first winter Ring-billed Gull and a gander at a couple of Cattle Egrets I spent the rest of the day with Kym in Plymouth, where I stayed that night.

Having thought I'd missed another patch Spoonbill, I had great delight in receiving news from Gav that it was still with us. Shortly after midday I was watching it feeding on the edge of Bridge Marsh, then later on the river. Spoonbills have good and bad years on this estuary, for example last year we had precisely zero Spoonbills, whereas in 2006 we had at least nine different individuals! With two already this year, it is certainly shaping up to be a good one!

Surprisingly few Gulls on the estuary this afternoon, with nothing in them of note at all, the two Tufted Ducks flew upriver.
The sea looked pretty impressive this morning, just a pity there was nothing on or over it! 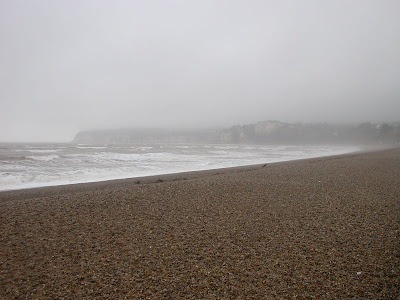 A murky Seaton Bay
Posted by Steve Waite at 16:33