As the title suggests, I was staring southwards from Seaton seafront this morning, and in particular the Spot On Kiosk - where else!?

As the title also suggests it was a duck-fest! It was a nightmare for the notebook though as ducks were going in every direction doing everything. Some in, some out, some east, some west, some landing, some not....nightmare! The first minute was all a bit manic, but I'm glad I wasn't a minute late! I rolled up at 07:15 and the first bird I saw was a female-type Red-breasted Merganser that flew in, I followed it in the scope as it dropped down into Axmouth harbour. I swung the scope round to the right to look out to sea and locked straight on to an incoming flock of ducks which soon showed to contain 15 Wigeon, 2 Teal and a female Pintail. Then behind them two more distant ducks were flying west - Goldeneye! I seawatched until 09:30, joined by Ian McLean from about 08:40.

My duck totals for this watch were: 4 Brent Geese (2 pairs west), 1 Shelduck, 2 Mallard, 1 Shoveler, 48 Wigeon, 28 Teal, 1 Pintail, 2 Goldeneye, 3 Red-breasted Mergansers, 46 Common Scoters, 1 Velvet Scoter (west) and 2 Eider (east, including a smart drake). Other bits and bobs on the move over the sea included: 1 Black-throated Diver (only my second of the year), 1 Red-throated Diver, 2 Diver sp., 1 Great Crested Grebe, 3 Razorbill, 1 Oystercatcher, 1 Curlew and 2 un-ID'd small waders. During the watch Gulls were continuously coming in off the sea into the wind, including lots of Common Gulls. A single adult Med Gull did the same, and as it was approaching I thought 'hmmm...this is going to come past me very VERY close, let's try a hand-held digi shot'. Unfortunately by the time I'd faffed around with my camera, and by the time the camera had focused on to the bird, all I got was this.... 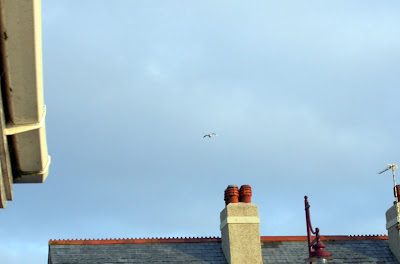 Well at least it is identifiable - white wing-tips!

There also seemed to be quite a lot of passerine movement overhead despite the rather strong wind. Some large flocks of Chaffinches flew along the beach, as did some even larger flocks of Starlings. The highlight was my first Fieldfare of the autumn. It was rather enjoyable watching Skylarks and the occasional Blackbird arrive in off the sea, reminding me a lot of the east coast.

I then went for a look around the valley, Lower Bruckland Ponds being the first port of call. The two Tufted Ducks from last week were still present, but two female Gadwall were new in, though they flew off as soon as they saw me! A flock of 30 Siskins flew over. After a stomp round the ponds I called in at Bridge Marsh, the two Gadwall were now here, as was the female Pintail I'd see fly in off the sea a few hours previous. I tried to get a pici of the Gadwalls and Pintail together, but the latter swam too far to the left so I had to settle for a really rubbish record shot of the former. 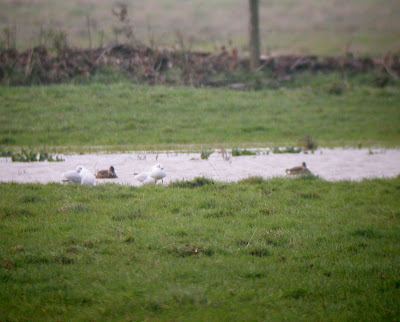 Another pants photo, but again identifiable - just!
A look at Seaton Marshes produced....two female Gadwall! I assume the same two! Also here four Shoveler, three Lesser Redpoll and a really weird Kingfisher! Here on patch Kingfishers are ten-a-penny, but I've never seen one like this! It was either really tame, or really ill, unfortunately I assume the latter. It just didn't want to fly! 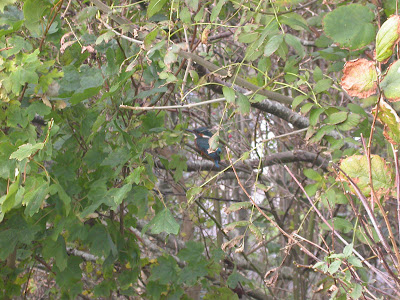 A Kingfisher NOT living up to its name!

I then went back to the Spot On again to try another seawatch, 10:40 - 11:20. This proved a great move as it added another two Goldeneye onto the day list, both 'brown-heads'. I picked them up sat on the sea close in at about 11:00. They soon took to the air, giving a wonderful aerial display! They flew west together virtually over the beach, U-turned, and flew back east again. They started to veer in towards the yacht club but in the end continued east presumably into Dorset. So that's FOUR Goldeneye in one day on patch - unprecendented! Also during this watch I logged another Red-throated Diver, 21 Wigeon (in off), 2 Teal, 16 Common Scoters, 1 Red-breasted Merganser (on sea) and 2 Razorbill.

Later on in the day, another sweep of the estuary produced four adult Med Gulls and five Dunlin.

That's my day off for the week, but am on lates Wednesday, Thursday and Friday so should have some morning birding time. To finish this post, here's a random photo of a rather nice collection of clouds over the sea at half seven this morning. Anyone know the name of all these cloud types? 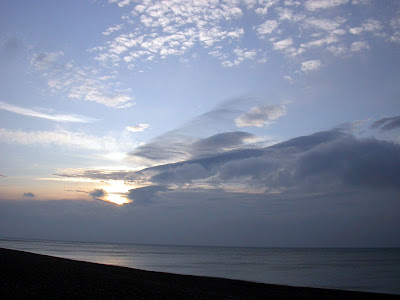