The Last Two Days And Today

Let's start with Friday. I got out of bed dead early and rushed up to Axe Cliff, the conditions were perfect for a huge movement. It was TOTAL CRAP! The most disappointing vis mig session I have EVER EVER EVER had! It was made a bit better though that night when I logged on to a couple of south coast birding sites, all experienced the same as me...high expectations but NAFF ALL! The only birdie highlight of the day was driving home during my lunch break; a female-type Black Red was sat in the middle of the road on Sea Hill. It took off and landed on an adjacent house roof before I could add it to the 'road kill list'.
Saturday I spent all day at work so saw nothing whatsoever. And now to today...

I took Kym to work (who has come home for the weekend) at ten then went for a look along the estuary. This smart adult Med Gull was in one of the first flocks I looked at.... 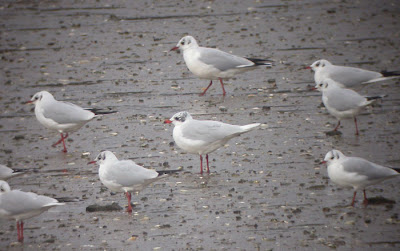 The only hint of anything Mediterranean today!

Then a little further up river I struck lucky with a stonking adult Yellow-legged Gull, I reckon about our fifth of the year. Unfortunately virtually the moment I clapped eyes on it the heavens opened, and it really REALLY rained! And as soon as the rain eased, the bird flew off! I did attempt to get a few digi-binned record shots from inside the car whilst it was tipping down with rain, here's the best of them - but they were all crap to be honest. Can you pick it out in the first one? I just wished it had stayed for some proper snaps, the pics I took really didn't do it justice at all - it was a stunner. 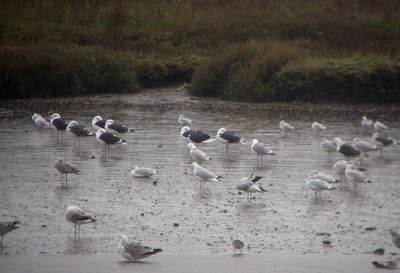 This photo - although fuzzy and pure tosh - does show it a little better. You can even just about make out its leg colour! 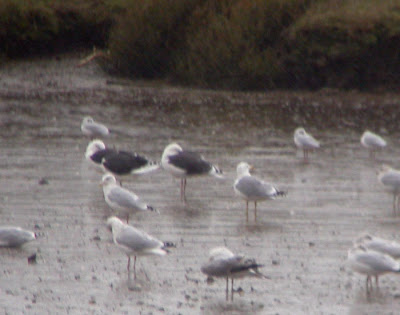 The only other sighting worth writing about today is of the continued presence of the two Tufted Ducks at Lower Bruckland Ponds. I wonder what tomorrow will bring.... rain probably!
Posted by Steve Waite at 19:39