It's been a bit slow over the last few days on patch, and today didn't appear to be any different. I was expecting a dry hour or so after dawn then continuous rain for the remainder of the day, with a force 8 south westerly throughout. Nothing like that at all! There has barely been any wind all day and after a VERY wet morning this afternoon turned out to be precipitation-free! Despite the lack of wind the sea still looked pretty impressive.... 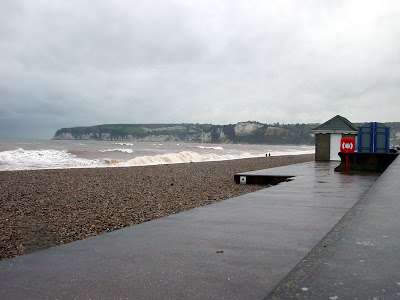 This pici shows my favourite sea watching 'shelter' on patch, the Spot On Kiosk. That's Beer Head in the distance, and the highest bit of white cliff further in the bay is Seaton Hole.

There was next to nothing over the sea whilst I was looking at it, a couple of Razorbills and Kittiwakes the best. There was virtually nothing of note anywhere, a late Swallow over Seaton Marshes easily being the highlight. I have noticed a few more Chiffchaffs about today (3 Lower Bruckland, 2 Seaton Marshes), a couple of Water Rails squealed when the water-levels began to rise on the estuary and the pair of Tufties are still at Lower Bruckland. A Stoat was nice to see as it legged it across the road at Boshill Cross.
With little light left (it was now 16:05) I thought I'd take a look at the Gull roost off Seaton Hole. A quick pre-scope-out-the-boot scan with my bins revealed a small flock of Scoters bobbing about fairly distantly offshore, about ten of them. I whipped the scope out to give them a closer look, and six Common Scoters in, a female/immature Surf Scoter gave me one hell of a shock! My phone immediately kicked into action and within 20 minutes all local listers and most local birders were on scene. It gave one flap showing us its belly and it appeared fairly dark, so presumably it's an adult female, which presumably makes it the Dawlish/Torbay bird!?? Because of this duck I didn't look at any gulls at all!

This is our fourth Surfer for the patch, though the first two were on the extreme edge of the 'greater' patch boundary, at Weston. We have been massively overdue a Surfer this year, and am only too glad that one finally gave us a look in, hopefully it will hang around.

So a cracking end to a crap day! But there was still time for the day to get even better... 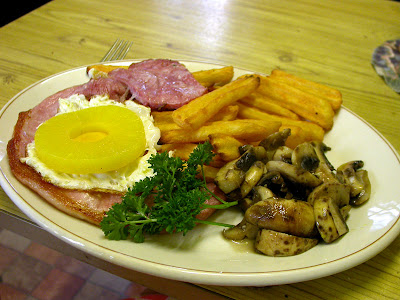