A Better Than Average Winter's Day!

Nice and cool this morning, with crystal clear skies. Went to work at one, and had the dentists late morning so only had a couple of hours in the field.

Lower Bruckland Ponds produced the female Tuftie still, and a sweep of the river produced nothing new or different. So, to the sea - I was here from 08:25ish.

There were 15 odd Common Scoters on the sea and two Great Crested Grebes. Two Teal and a Wigeon flew in from the south to join the Scoters. Shortly after this a Tufted Duck also flew in off, heading inland over town. Then I picked up three distant ducks sat on the sea, they were female-type Goldeneyes! Any other year this would have sparked a local twitch, but this year has been a bumper year for this species on patch. These were my sixth, seventh and eighth of the year, our tenth in total! Ian M and birding friend Alan came to see them, and they remained here until I left just after 9am. Lastly, a flock of c30 Common Scoters flew distantly west.

Before I returned home I had a look along the top road (A3052). Didn't take long to find what I was hoping for amongst a few fields-full of Lapwings near the Honiton turn off, about 30 Golden Plovers. Wanted to get some real good photos but as I had just started clicking they all moved to the next field over, which was out of view! I will try again at a later date if they remain, here's one photo anyway.... 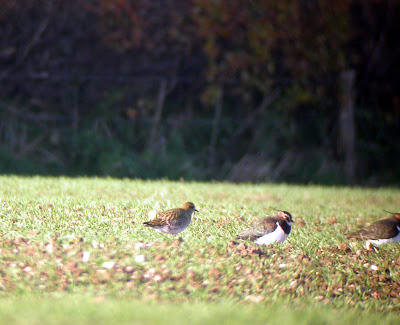 It must be cold if we have these!