Last night I witnessed some very dramatic scenes on Seaton beach. Although there was almost no wind, the true power of the sea could be seen. Foam was everywhere, and beach huts were being knocked about like they were made of polystyrene. I watched several being 'sucked' from the beach and into the sea, where the next large wave destroyed them with seemingly no effort at all. This morning, half the beach huts on the west walk are damaged/destroyed/gone, likewise many on the east part of the beach. 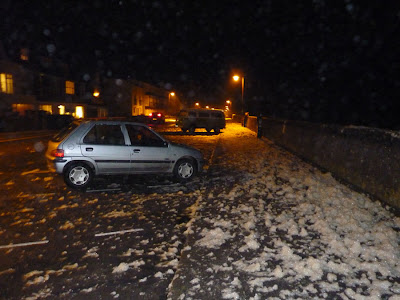 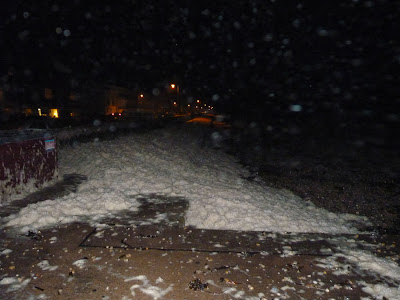 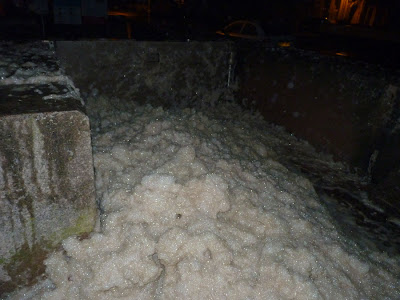 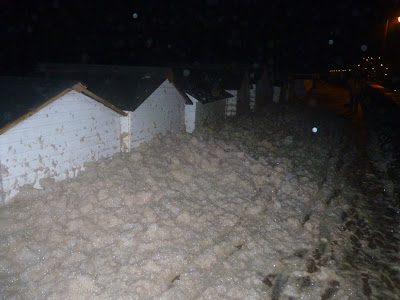 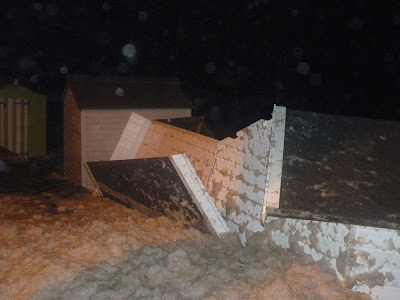 It looked like snow! Note the green beach hut facing the wrong way!
This morning I was up at 05:45. After quick look at the sea front to check on our beach hut (which had thankfully survived the night) I was at Beer shelter for 06:15. Bun and Karen joined me briefly from 06:30. Although there was nothing like the Skua passage of yesterday, it was still an enjoyable sea watch with some nice sights.The highlight was an adult summer Little Gull soon after I arrived, it was feeding whilst slowly flying west. I really enjoy the Brent Goose passage too - although I had missed a flock of c45 that came through prior to my arrival (seen by Gav from Seaton).My totals for this watch, 06:15 - 08:15, were (west unless stated):93 Pale-bellied Brent Goose (four flocks, one of a flock of six had a lot of white in the wing - anyone else seen this bird?)6 Dark-bellied Brent Goose (in with the Pale-bellies)6 Gadwall (4 and 2)49 Common Scoter4 Great Northern Diver (1E, 2W and 1 sum plum close in on sea before also flying west)13 Manxies13 Whimbrel4 Bonxie (2E, 2W - at least three birds involved for definite)1 Arctic Skua (pale-phased adult flew distant east but came in and flew back west close in)1 Little Gull6 Kittiwake10 Sandwich Tern8 Razorbill13 auk sp.

If you enlarge this photo you can just about to make our four Dark-bellied Brents
So, it was an enjoyable sea watch...but still no Poms. I thought I had blown it...I was at home doing things that needed to be done, but a quick check on Portland Bird Obs website had me heading for the door again! They had had Poms in Chesil Cove and past the Bill, I was still in with a chance - so I went back to Beer.I sea watched 10:30 - 12:30, and what a great watch it was! This is because I saw not one, but SIX Pom Skuas! Y-e-e-e-e-a-a-a-a-h-h-h-h-h! At 11:15 I picked up a flock of four Skuas way off to the east flying west, I knew instantly they were Poms. I watched them for the next fifteen minutes as they made their way across the bay and out around Beer Head - twice they stalled briefly on the sea, but they didn't stay down for long. The flock comprised two full-spooned pale-phased birds, a slightly darker intermediate-type full-spooned bird, and a dark phased 'spoon-less' bird. I sent some texts out, and Gav and Ian M both reacted and were alongside me within half an hour. I have to say, I felt bad though because there was absolutely nothing to see! Since the four Poms, the sea had gone dead. Well, that was until at 12:20 when Ian picked up a Skua heading east - another Pom! And with it a second one. These were both pale-phased birds, one with spoons and one without. The spoon-less bird briefly harassed some Sandwich Terns before continuing on east. Result! So pleased for Gav too.The full list from my second sea watch of the day looks like this (west unless stated):24 Pale-bellied Brent Goose (in two flocks; with Gav's flock we've had c170 of these today)12 Common Scoter1 Black-throated Diver (a really close winter-plumaged bird west)42 Manxies1 Bonxies (east)6 Pomarine Skua (4W, 2E)1 Med Gull (first summer feeding offshore)3 Kittiwake33 Sandwich Tern4 RazorbillAlso of note, throughout both these watches I saw several hirundines and other passerines fly in off the sea, indicating that it was a good day for passerine migration today. Wish I had more time because I would have 'bashed some bushes' if I had.
Posted by Steve Waite at 14:35