Not The Day I Was Expecting

Normally, the evening before I have a pretty good idea what kind of birding I will be doing the following day. And last night I set the alarm for 6am with sea birds in mind. I was very wrong!For some reason I woke up shortly after 4am today, and it was horrendous outside. Heavy rain and strong winds battering against my windows. When my alarm went off at 6 though, no rain, and much less wind. This, along with my interrupted sleep, encouraged me to get a little bit more sleep!When I did get up, I sent Gav a text to find out what the sea was like. The response was mostly negative, so I headed out at 7:30 to check elsewhere.The Estuary showed nothing new at all, so I headed to Black Hole Marsh. As soon as I stepped out the car I could hear several Willow Warblers singing, many more than I should be hearing! I wandered down the track towards the marsh, but was interrupted by a reeling Grasshopper Warbler in the field to the south. One of my favourite sounds of the spring - and our first of 2012. A look over the lagoon showed another 'first for the year', in the form of this Common Tern... 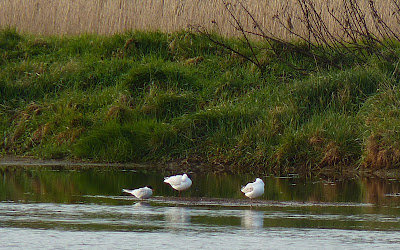 With two Black-headed Gulls
I walked back towards the car where I met Gav who had twitched the Gropper (they can be hard to find when you 'need' them). Whilst we were waiting it didn't make a sound, but another first for the year briefly popped up, in the form of a cracking male Whitethroat.Next stop was the Beer Cemetery Fields, I grabbed my mist nets on the way up too. I shouldn't really have bothered with the nets, as it was really quite windy up there - although it wasn't a total waste of time as I did catch and ring three birds; Blackcap, Wren and Blue Tit.It certainly wasn't a waste of time coming up here though! Two and a half hours produced;2 Redstart (males - in the same area as each other)1 Tree Pipit (flew low west calling at 11:15)1 Grasshopper Warbler (reeling near the cemetery - it was real close but I never saw it!)45+ Willow Warblers (probably many more) 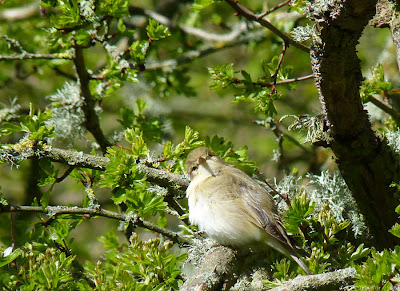 One of the Willys
And I know you know what a Grasshopper Warbler sounds like, but here is a short video clip of the Beer Cemetery bird reeling...
I was out again this afternoon. Seaton Marshes produced ten Wheatears, Colyford Common another seven, and my first Sedge Warbler of 2012 was singing beside Black Hole Marsh.Considering the date, and the weather, there are still very few hirundines about. I have seen a few Swallows about, but in past years, this weather on this date would produced several hundred hirundines in the river valley - and possibly even the first few Swifts. I wonder where they all are?

What a brilliant and very enjoyable day! It's so nice to see a decent spring fall. I spent a lot of time out yesterday too, and saw nothing of note all day! The only migrants I saw were a couple of lone Swallows. What a difference a day makes! I presume the weather over northern France was clear last night - they must have had one hell of a shock when they arrived in the UK!