Normally I am quite an intense sea watcher. Pockets full of clickers, a notebook and pen, there for dawn. But not today, yet it was probably one of the greatest spring sea watches I have ever had on patch! And this was pretty much my first attempt at a proper sea watch this year!
Last night, Bun texted to say he was going to be sea watching off Beer from 7am. My alarm went off at 6:10am, but I hit snooze...and again....and again.... I finally got up at 7am, soon received a text from Gav simply saying "sea busy", then made my way to join Bun at Beer with no clickers and only a scrap piece of paper. Bun was running late, and we both arrived at the shelter at about 07:22. In the first scan, several flocks of Manxies were in view - oh goodie!Top bird number one came at 7:30, when I picked up a first-year Little Gull flying in from the east with five Sandwich Terns. The Little Gull then spent the next ten minutes or so feeding fairly close in. Another one, or the same bird, reappeared at 08:30ish. I'm more inclined to say it was a second bird, as it appeared to fly in strongly from the east.Next highlight was after a tip-off from Gav, who was sea watching from Seaton. At 07:45 two pale-phased Arctic Skua flew in from the east, at close range. They came into view with two Kittiwakes, but soon lost them when they spotted a small group of fishing Sandwich Terns. The Skuas spent the next half an hour offshore, often resting on the sea near to the fishing terns, only flying up when they had 'pirating' to do! We got excellent views of these two beauts.The final highlight was without doubt the best. At 8am, we had kinda given up and were just chatting about all sorts of rubbish, when I fixed my scope on a bit of sea that had a summer plumaged Black Guillemot flying over it!!! SHOCKER!!!! I shouted to Bun, and despite his shaking hands and noticeably panicky voice, he quickly got on it. It was distant, but the light was brilliant. We both managed to lose it soon after, me whilst I was hopelessly trying to photograph it, and Bun when he moved his scope. For Bun it was a patch lifer, but I saw a single moulting bird off Branscombe in Feb 2005, followed by two in summer plumage there in March. As it's a Devon A rarity, and didn't photograph it, I quickly penciled out a sketch of it on the scrap bit of paper in my pocket - much to Bun's amusement! Needless to say I will not be posting it up here!!This is the full list of what we clocked up this morning (west unless stated);2 Common Scoter1 Great Northern Diver (east)1 Red-throated Diver (east then landed on sea)40+ Gannet200+ Manx Shearwater10 Whimbrel (see photo)2 Arctic Skua8 Kittiwake1+ Little Gull8 Sandwich Tern10 auk sp.1 Black Guillemot 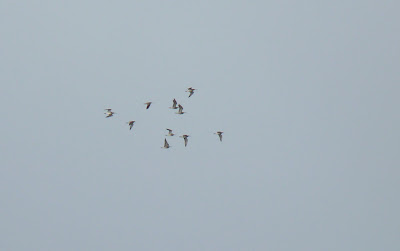 My first of the year - they gained height and appeared to continue west over Beer Head
Another short sea watch from Spot On Kiosk, Seaton, 11:30 - 12:15 revealed the now westerly wind had pretty much killed it. Except for Sandwich Terns, of which 29 flew west. It was nice to see hirundines trickling in off the sea, including my first House Martins of the year (at least six).Despite almost immediately alerting other Devon birders about the Tystie, it wasn't seen off anywhere else. So I'd certainly advise a look off Branscombe in the morning - the sea should be a bit calmer too.
Posted by Steve Waite at 20:23