A Day Of Sea Watching

Some would blame my current bed-loving nature for missing three Pom Skuas this morning - I blame the weather men! They said it was going to be tipping down, clearing mid morning, about 10ish. So I had set today aside for a mid morning til early afternoon sea watch. When I did wake up soon after 7, I looked out to see no rain and lots of wind!Just after half 7 a text from Bun informed me of the Poms - I really have rotten luck with this species on patch (as you will read later!). The last spring Poms I saw were in 2007, three in one sea watch, and they were awesome. But I want to see more!!!So I rocked up at the Beer shelter just prior to 8am. And the shelter was VERY busy... 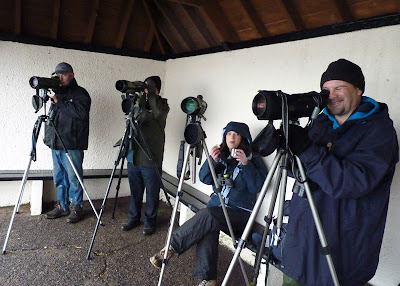 Almost full capacity!
They had already notched up nine Bonxies, the Poms and an Arctic, along with a load of Whimbrel and two Velvet Scoters.Bonxies were the main feature of this sea watch, but they were flying in both directions, so the true number of birds is impossible to know. I saw 23 in all (17W, 6E), whether this is 23 different birds, or 17, or 11, I don't know. Who knows? The four Arctic Skuas were all different birds though, with two (pale and dark) west, then a single dark phased west, and lastly a single pale phased east.The full list of what I saw (08:00 - 10:40) looks like this:43 Pale-bellied Brent Geese (3, 13 and 27)2 Mallard11 Common Scoter2 Great Northern Diver1 Black-throated Diver1 Red-throated Diver79 Whimbrel23 Bonxies4 Arctic Skuas70+ Kittiwake (they picked up near the end of the watch)40+ Sandwich Tern2 Common Tern 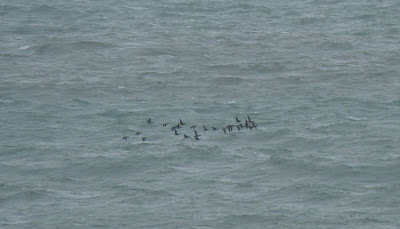 The largest flock of Brents
Passage really died at about 10:15ish, the sun had come out and wind dropped right off. It could almost be described as being pleasant. 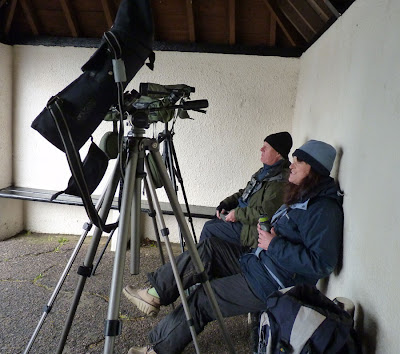 Sea watchers getting bored!
So we jacked it in at 10:40.After doing a few jobs at home, and having a bite to eat, the weather turned again, and after a text to Bun, Me, him and Dad were back down Beer shelter for 14:00. Within five seconds of setting my scope up, two Arctic Skuas flew past, and a third came through a couple of minutes later. I sent a text to all the other patchers which ensured Ian M joined us at half past, and later Phil and Gav.The star bird in this watch was a Little Tern - only my sixth on patch ever! I picked it up as it was flying south west with a small group of Sandwich Terns - such a tiny bird! Luckily for the year listers it hung about, and remained for a couple of hours - although it was a right git to see! It took Phil about an hour and a half to catch up with it.The totals of what I saw in this watch (14:00 - 16:40) are:32 Common Scoter14 Bonxies (8W, 6E)7 Arctic Skua (5W, 3E)36 Whimbrel25+ Kittiwakec9 Sandwich Tern (blogging)1 Little Tern2 Swift (in off, my first for 2012)Well, when I said I watched 14:00 - 16:40, there was about a three minute period (about 14:40) when I nipped off to move my carpark to avoid getting a parking ticket. In that time, a sodding full spooned pale-phased Pom flew REALLY close east. What a total bummer! I have seen 48 skuas today, but the only Poms flew by when I wasn't there. I was ok about missing the morning ones, but this was just cruel. It didn't put me in a good mood! (sorry Jess!!). It has insured though that my alarm will be set for 6am in the morning though!!Ok, enough about sea birds! I have had a couple of looks up the river, the highlights being 16 Whimbrel and a pair of Gadwall. I was expecting to see more though as there was a heck of a lot of water in the valley today - it looked great for a Black Tern. Maybe tomorrow...
Posted by Steve Waite at 13:08