I had to investigate this action going down at Seaton Hole this afternoon.... 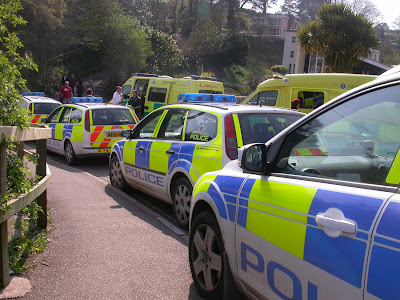 50% of the Devon and Cornwall Police Easter Sunday shift!
Even Whiskey Bravo came over, lowering one of its crew down to the scene... 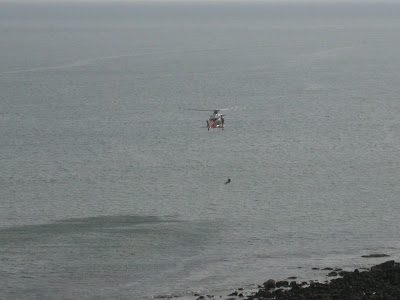 That's one brave man!!!
It doesn't look good for the person they were attending too as WB left empty handed, as did the four paramedics. The Police Heli came, then disappeared, but returned about twenty minutes later dropping a doctor-type person off on the beach, I assume to announce the casualty dead. Very sad indeed, I assume it was a tragic accident.

OK, enough of this doom and gloom. What birds did I see today?

Best of the bunch was easily the first summer Iceland Gull on Blackhole Marsh at 17:30, presumably a new bird as none have been seen here for weeks now. It took off and circled with other Gulls over Blackhole/Colyford Common before heading off north. Otherwise, a single summer plumaged Dunlin on the estuary and two Sandwich Terns past the sea front complete my sightings for today.
Posted by Steve Waite at 21:40