Drove home from Plymouth this morning, arriving back on patch mid morning. I was extra keen to get out birding for two reasons; I just LOVE birding in cold weather - you just don't know what is going to 'drop in' next! And reason number two, there have been two patch goodies seen over the past couple of days; a Snow Bunting along the tramline yesterday (whilst I was in Plymouth) and a Slav Grebe on the estuary on Saturday afternoon (whilst I was at work!). I had kitted myself up and left my house just after 10am.

The sea gave no surprises with three Great Crested Grebes and 20 Common Scoters all I could manage. A look at Lower Bruckland Ponds showed a drake Tufted Duck has joined the lingering female - it looks like the same male that arrived with her but disappeared a couple of weeks ago. The estuary showed three Dunlin and about 50 Black-tailed Godwits.

Seeing as it was cold, I thought I'd wander north of Coronation Corner again, for the second time in the last week, to stomp around in some Snipe habbo. This is what it looks like.... 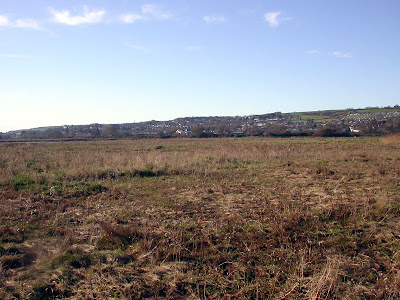 This is the salt marsh immediately south of our biggest reedbed.

And how did my stomping go, well very well indeed! 21 Snipe flew up, and best of all, a gorgeous little Jack Snipe. It gave superb flight views as it flew up from between my legs and banked around just feet off the ground before dropping back into the reeds. Another nice surprise here was a flock of six Gadwall which flew low south past me, briefly landing on the estuary. A decent sized flock for the patch, and more evidence of cold weather movement.

On the way to Plymouth on Sunday morning I saw 40 odd Golden Plovers besides the A3052 in the usual field near the Hontion turn-off. So mid afternoon today I went back up there and this time counted 62, with surprisingly few Lapwing. I could hear more Goldies calling from adjacent fields too. Here's how it looked with the naked eye..... 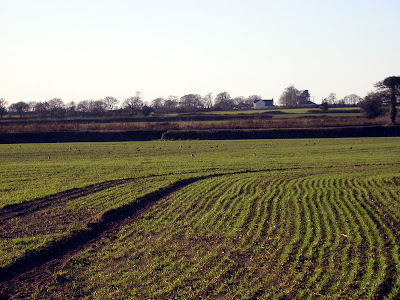 It must STILL be cold if we STILL have these!!

And this is how one of them looked through my telescope.... 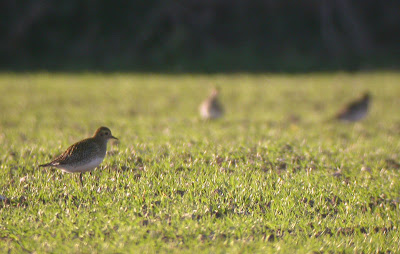 This evening the Gull roost off Seaton Hole gave me just two adult Med Gulls, still, two better than none I suppose! Other bits and bobs today included good numbers of Fieldfares and Redwings everywhere, a Peregrine causing havoc over Colyford Common, and on Seaton Marshes the showy Cetti's Warbler remains in the same place as I saw it a week ago, and three Water Rails squealed.

Re-winding the clock back to Saturday morning and we had a excellent ringing session on Seaton Marshes. Karen has a good run-down of the event on her blog so take a look if you haven't already.
Posted by Steve Waite at 16:51