Not as cold this morning, but still a bit of a frost. This is how Bridge Marsh looked at about 08:30.... 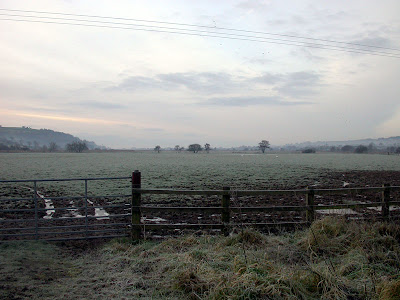 Can't get much more wintry than this!

My day started with a sea watch from Spot On, didn't last all that long though because it wasn't overly exciting! A single Red-throated Diver east was notable, as was a nice adult Med Gull west. On the sea were six Great Crested Grebes and a few Common Scoters.

Could only see two Golden Plovers alongside the A3052, and no more than 20 Lapwings. They must have found a new field to hang out in. I then headed even more inland to the Farway area. One field proved especially productive with 120 Linnets, 40+ Chaffinches and at least eight Bramblings - including several smart males. This is what said field looked like.... 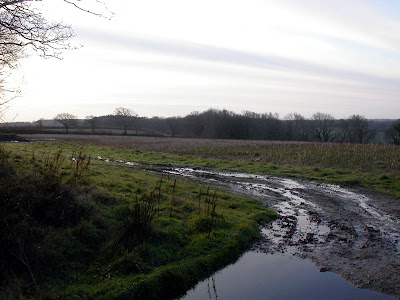 This field is opposite the exit to Farway Countryside Park

Early this afternoon I gave Colyford Common a visit - my first visit here for weeks! Good to see Water Pipit numbers have built up nicely, with at least ten present along with similar numbers of Meadow Pipits. As always the Rock Pipits were on the reserve-side, with five here. It's always hard to get a pic of our Water Pipits, they don't stay still for long! I managed to get a few snaps though as one briefly perched up on overhead wires....'tis a bit crap though! 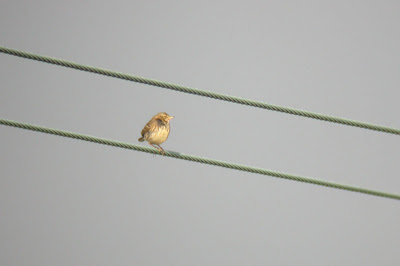 Actually it's very crap, but still, it is a Water Pipit!

Also at Colyford a couple of Water Rails (with three others seen/heard earlier in the day elsewhere), a Cetti's Warbler, six Snipe and a Green Sand.
Posted by Steve Waite at 14:40