First of all, I'll write about what I saw yesterday during my brief sortie into the field late morning. The sea was quiet, with 13 Common Scoters, six Great Crested Grebes, a Red-throated Diver and a Razorbill resting on it; another Red-throated Diver flew west past. The best on the estuary was this very lovely-looking adult Med Gull. 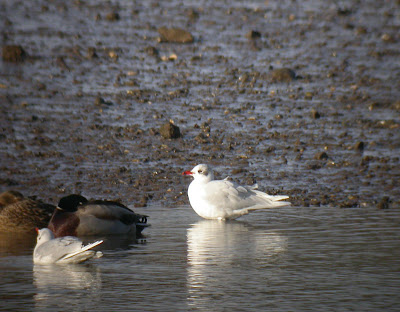 A different adult to the bird I saw the previous day

This morning we were hoping to catch some ducks on Seaton Marshes, but failed miserably and caught none, did see four Water Rails though (two in the north west corner). Leaving here just after 9am I went straight to the seafront, and was greeted by yet another patch scarcity - a young male Eider. This is mine, and I think our, fifth Eider of the year. Also on the sea 14 Common Scoters, now eight Great Crested Grebes, two Razorbills and a Guillemot. On the estuary, just over 450 Wigeon which is an increase.

With the other local bloggers talking about lists, I'm totting up my totals for various lists (patch/house/life). I will post details of them here in the near future.... stay tuned....
Posted by Steve Waite at 22:48