What a fantastic day - and I normally really hate bank holidays cuz people are just bloody everywhere! I started the day at Beer Head, nice and early at 6am...
Even by 06:05 I knew it was going to be good, as in the gloom I'd already seen four Tree Pipits and two Wheatears! I stayed up here until 09:20, and could have stayed much longer if Blackhole Marsh wasn't beckoning me so much!
As always, Beer Head offered superb scenery... 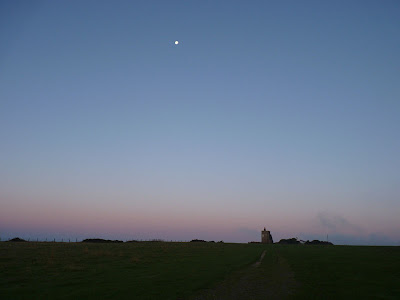 Look! The moon is still out!!!
And about twenty minutes in, I turned around to see this... 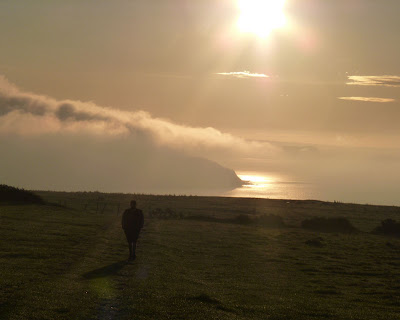 It's Bun! (I tried to hide but he had already seen me!)
These were my totals by the end of my three plus hours here, plus a few hopeless pics...

Redshank - one heard flying over
Great-spotted Woodpecker - two juvs, notable for beer head
Yellow Wagtail - 61 flew west, though many landed with cattle west of the look out 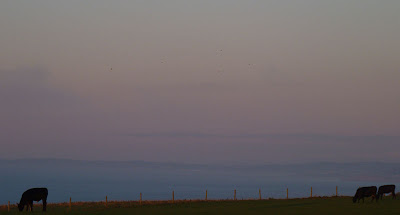 you can just about see six flying west...if you really squint!
alba Wagtail - 18, including at least twelve grounded
Tree Pipit - a good total of nine included (unusually) three grounded birds. Like the others, these flew off NW 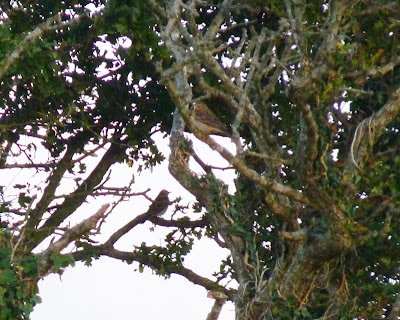 A very poor photo of two of the settled Tree Pips
Meadow Pipit - two west
Wheatear - at least 48, some moving through very quickly
Whinchat - one west of the look out 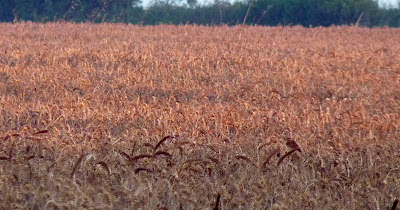 Sorry, I know I really shouldn't post a photo of this quality!
Stonechat - one juvenile near the head
Garden Warbler - two (Summit and The Hollow)
Blackcap - at least eight
Whitethroat - four
Sedge Warbler - one in The Sheepwalk
Willow Warbler - 37+, in reality there were probably twice as many!
Chiffchaff - six
Pied Flycatcher - one in hedge east of Sheepwalk, showed well
Spotted Flycatcher - three
Bullfinch - one at The Summit

Am very pleased with this haul, well worth the early start! And it wasn't just birds that were plentiful at Beer Head this morning... 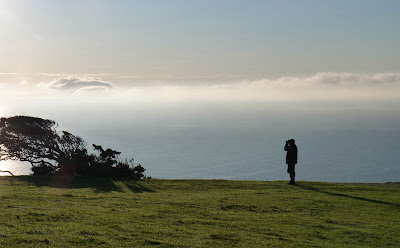 ...this is Bun again 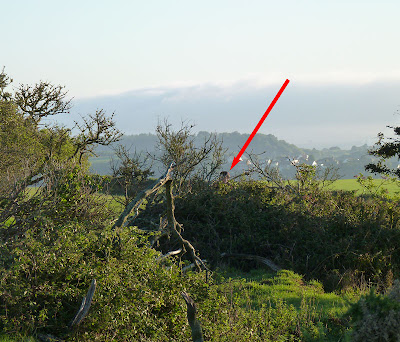 ...now this elusive one IS a tricky ID, if the subject was in winter plumage you would see red with this view :-) 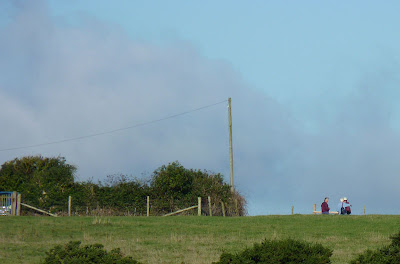 Three more distant birders - one being 'old man' Waite
At 09:20 I hot footed it to Blackhole Marsh, hoping that a certain stint had joined our Dunlin flock (this Stint in case you didn't know!). Well it hadn't, in fact nothing had - all looked very samey in the wader department to me!

I had a bit of shock though whilst kicking about in some ditches and reeds, not what I was hoping for but still much appreciated... (by the way it didn't coming out of the ditches, just flew south west over the marsh from Colyford Marsh direction)
I sent a text out saying what I'd seen, but was pleased to re-locate it a few minutes later a little to the south of me, so sent another round of texts out. If you can't work out what it is from the video, this should help... 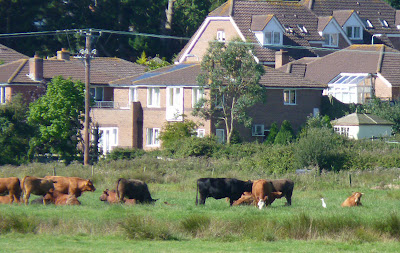 ...say what you see!
It's our first of 2010, but at least the eighth I've found on patch. Isn't it funny how a few years ago everyone was like "they are doing a Little Egret - they will be everywhere soon!" and now they've gone back to being scarce again!

The only other few bits of news I've got to tell for today is of singles of Whimbrel and Wigeon on the Estuary, and three Greenshank and 18 Teal on Colyford Marsh.

What an excellent day - bring on more like this :-)

ps it is a Cattle Egret and remained in the area all day!!
Posted by Steve Waite at 16:10