Yesterday morning I had an urge to find an Aquatic Warbler, so Bun, Karen and I gave the marshes on the west side of the river a good 'bashing'....did we get one??

Well if we had found one you would have known by now! We did unearth at least 15 Sedge Warblers though so we considered it a worthwhile few hours, and it is something we will certainly do again if a few more Aquatics start appearing on the south coast.

During our wander several ones and twos of Yellow Wags flew over, along with a couple of Swifts.

Today has been a day of rain, though I was out early before it really started lashing down. Blackhole Marsh showed the same selection of birds as recent days, though the Little Stints have gone now.

Visiting birders be aware than work has started on the main hide here. The walkway is being built now, with the hide going up once this has been completed. This is the work done by the contractors on day one, not bad I suppose... 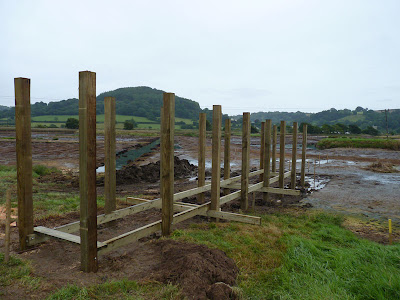 Pity it couldn't wait another month though


There were lots of hirundines feeding over the water, with this juvenile Swallow using one of the diggers to rest on... 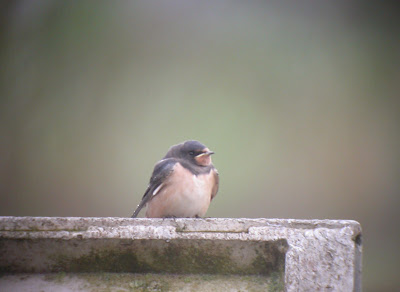 
Just as a major rain storm came over, I had a bit of surprise whilst looking out to sea. A flock of seven duck appeared, flew in off and up river - they were Pochard! 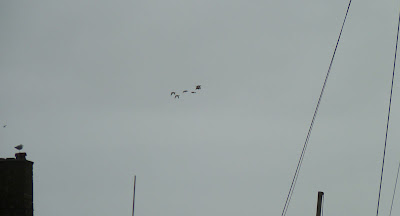 ...not that you can tell that from this photo!!


Soon after they were floating on the water north of Coronation Corner, but I couldn't see them a couple of hours later. An interesting and surprising record for August!
I had the moth trap out night before last. I won't list what I caught as there was nothing new for the garden or the year. I had 44 of 12 species, with Setaceous Hebrew Character being the most numerous, and singles of Small Waved Umber and Jersey Tiger being the highlights.