I woke up to another wet, dull and misty morning....so stayed in bed a little longer than I really wanted to! At just gone seven I finally dragged myself up and headed down to Blackhole Marsh, before the workmen arrived.

It was worthwhile, as with the small wader flock was my first patch Sanderling of 2010 - I think a first for the marsh! Sanderling is a scarce bird on the river, with most of our records concerning birds on/past the beach in late spring. As I've already said, it was misty and drizzly, an excellent excuse for posting a photo of this quality... 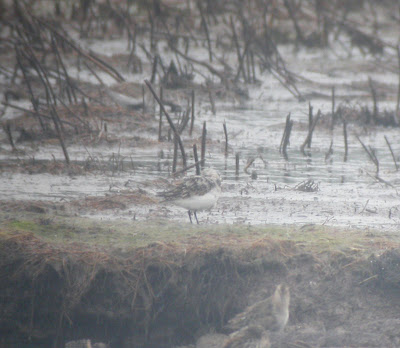 So how much work did the workforce manage yesterday - a day of almost constant rain. This is how it looked this morning... 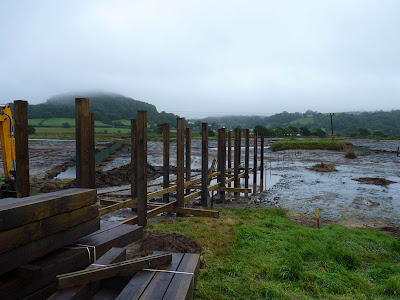 Well they've put another pair of posts in the ground!
At about 8am, I suddenly realised the weather had cleared, and the noticeable south west wind lured me to the seafront and my favoured sea watching spot for 'rough but dry conditions' - the Spot On Kiosk. It proved a good move as between 08:20 - 09:40 I notched up the following: 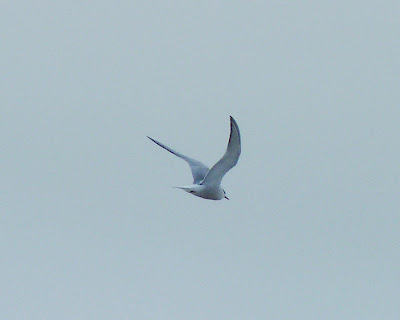 ...just a pity I was a little late in 'whipping it out!'
Numbers of large Gulls on the Estuary during this rough spell of weather have been surprisingly poor, though both sizes of Black-backed Gulls are making up a higher percentage than usual. In the small collection present on the river early this afternoon was this rather black mantled and long-winged Leeb... 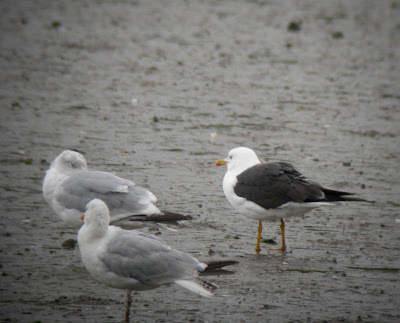 intermedius-type!? Although it doesn't look that dark in this pic, it wasn't far off GBBG colour
The more observant blog browsers may have noticed a change in the name of this blog (not to mention a total re-vamp in layout!). I thought I'd go for a short, simple and obvious title - I should have changed it yonks ago really!

If you are a fellow blogger and have my blog in your blog list (for which I am much obliged), if the name change doesn't show up can you remove then re-instate me, that should do it. Thankyou :-)