Since Tim Wright saw one of the local Dippers from my PWC patch, I have been giving it more time and not just a quick scan each time I've been passing.

Yesterday I spent a total of 45 minutes watching the bit of the River Coly that can be seen from the bridge by the White Hart Inn in Colyford, but nothing.  Today though after about 40 minutes my prize came, and even sang for me! Dipper now well and truly on my Patchwork Challenge year list :-) 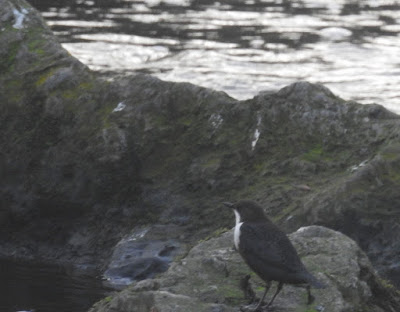 Earlier this morning a short sea watch showed nothing better than two Brent Geese and seven Red-throated Divers, but there's still a few Razorbill (no Guillemot as of yet this year!), Kittiwake and Gannet out there so must be plenty of food about.  Patchwork Challenge is making me look at the sea far more than I usually do in January, and it does make a difference. Brent Geese for example aren't usually an easy bird to see here before spring, but I've already seen 21 this year in seven different flocks!

I have now registered my Patchwork Challenge patch on the brand new Patchwork Challenge website.  I am a bit torn between entering into the Estuaries league or the Coastal South league. Although there clearly is an Estuary on my patch, I have so much more than just Estuary so maybe coastal would be best?  Will have to ask the powers that be.