The Flood Gates Have Opened

Yesterday morning, most of Beer Head looked like this...

Thankfully though, the eastern side of Beer Head was clearer, and this is where the birds were.  April 15th is 'Grasshopper Warbler day'. Almost every year we've had at least one on this date, and this years bird reeled for about ten seconds at the bottom of the Dell.  I, like others, always like to see Grasshopper Warblers, but I do find something quite magical about just hearing them. So often when your migrant searching in spring one will start reeling, then stop and just disappear in to thin air. They are almost mystical! And how many non-singing birds do we walk past!??

The other year tick here was a heard only Tree Pipit somewhere in the fog. Ian M saw it briefly later too in roughly the same place.  The colour came thanks to two cracking male Redstarts, these shared the bushes with 15+ Willow Warblers, 5+ Chiffchaffs, three Blackcap and a Fieldfare. It was also nice to get good views of a huge and pale Greenland (type) Wheatear.

After Beer Head I then had a walk around the equally foggy Beer Cemetery Fields.  It was mostly quiet here except for a small group of Willow Warblers accompanied by another fine male Redstart, at least five Blackcaps in the lane behind the cemetery, and a Siskin.

The low cloud/fog yesterday meant throughout the day there were large numbers of hirdundines feeding in the valley. Mostly Swallows but with several Sand and House Martins mixed in too.  I managed to see all three species from my house late afternoon, and at 17:50 had a very pleasant surprise when a Hobby powered through low north. I really love where we live :-).  I love it even more because I can walk to Black Hole Marsh in exactly four minutes. When the next mega occurs here that I'm at home for, it would be quicker for me to run/jog to it, than drive to it! Love it!

Anyway, this short walk was what I did this morning. I didn't get home til very late last night after a Devon Birds council meeting, so didn't fancy getting up early. This is why I didn't see a Velvet Scoter that flew past us at 7:40. But when I did emerge I had a great time at Black Hole Marsh.

It was really jumping with birds!  The bushes were alive with Willow Warblers... 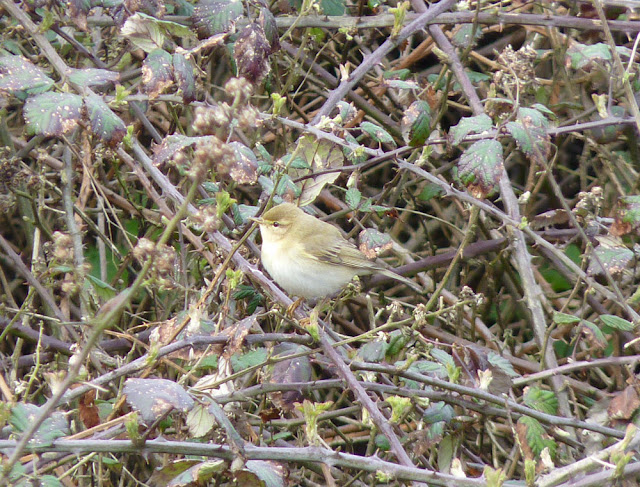 And in the reeds, my first Sedge Warbler of the year showed well before singing.  The highlight was on the marsh though, with a cracking male Yellow Wagtail amongst six Wheatears.  Sadly when the Wheatears moved off west, so did the Yellow Wag. In this picture they are four Wheatears and the Wagtail, can you spot them all...


Also on the marsh, a couple of Green Sands (looking stunning now) and my first family of Mallards...

That's probably all the birding for me for a couple of days. Although I do hope to spend an hour sea watching in the morning before I have to head off to another meeting.