My alarm was again set for 05:40 yesterday for some pre-breakfast birding. A look out the window though revealed thick fog so I got on with my laptop work and saved up my birding time for later on in the day.

Late morning, after noticing from the kitchen table several big Swallow flocks flying north - and my first Swift - I just had to get out!

Black Hole Marsh was my destination, and I was soon greeted by a fly over Yellow Wag amongst the trickle of Swallows and Martins.  It was as I was leaving that I first heard the song of the Lesser Whitethroat, and I soon picked it up just south of the main entrance track to the marsh.  Gav and Karen both arrived, by which time it had moved nearer to Black Hole Marsh, and was joined by a Whitethroat.

I returned home for an hour or so, but my best efforts to work were disturbed by a text from Gav informing me of a Garden Warbler north of Coronation Corner.  Kindly Gav waited for me (delaying his lunch hugely!), but I had to wait about half an hour to see it.  We could hear it, and see Blackcaps, a Whitethroat and a couple of Willow Warblers, but the bloody Garden Warbler took an age to come out!  Thankfully it did though... 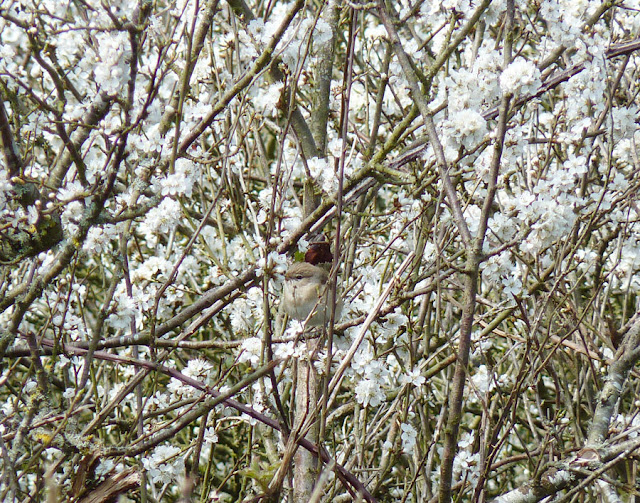 Then it was back home, and this is where I stayed until Jess finished work. Early evening we went for a walk around Lower Bruckland Ponds, not much to be seen here, so we headed into town to buy a few bits.

Jess knows by now though that I can't drive past the 'Farm Gate' without stopping!  And I'm glad I did last night as an immature male Marsh Harrier was hunting over Colyford Marsh - result! It was a cracking bird too.

This morning, the alarm went off at 05:40 again and I went down to Black Hole Marsh.  The Lesser Whitethroat was still singing away, more Reed Warblers were singing away than recent days, and 12 Ringed Plovers were good to see (wader passage!).

Whilst attempting a sea watch after this, I didn't see any sea birds but I did see a Yellow Wag fly in off the sea.

Right - time to bury my head in my laptop yet again!!!