Branscombe Back To Form

Well there's still no summer migrants on my year list!  I spectacularly dipped Little Ringed Plover yesterday, and James M saw a couple of Sand Martins over Seaton Marshes last Sunday - so we have had some.  The best I've managed so far was a single male White Wagtail opposite Axmouth FC this morning, which was nice. Equally nice was seeing  the Water Pipit again, although rather briefly.

The flat seas tempted me over to Brascombe this morning. I thought the three Great Northern Divers I saw the other day may have been the start of something - and I was right!  I did three complete 'sweep-counts' of the sea, and the last one gave the greatest count - 42! Yes 42 Great Norther Divers!!!!  Although I was surprised to see this many, we have had large gatherings here before. There were several small groups and singles dotted about, but also two main flocks, one of 13 and another of 14.  A flock of 14 Great Northern Diver is quite a sight I can tell you!  I saw a few wing flap and they appeared to be in wing moult, so I can see us having these birds here for a while yet - maybe they will attact a White-billed!?? Ideally we need a proper flat calm 'glass-like' sea to get the true count, which I'm sure will be greater than 42.

There was a 43rd large diver out there, very distant. Plumage wise I had it down as a Black-throated, much more contrasty than any of the other 42 birds, with really nice constant flank patches. But it just looked too bill and head heavy - structure wise it looked like a Great Northern. So it had to go down as a diver sp. because I just couldn't make my mind up! If it had too, I always tend to go for structure and shape over plumage, so I'd say it was another Great Northern.  There were also seven Red-throated Divers here and 23 Common Scoters. 12 of the Scoters were sat on the sea, eight flew east and three went west.

Also at Seaton Marshes, I was surprised to see a bat flying around!  Just as I went up to record a video of it, it disappeared. But I soon found where it had 'disappeared' too... 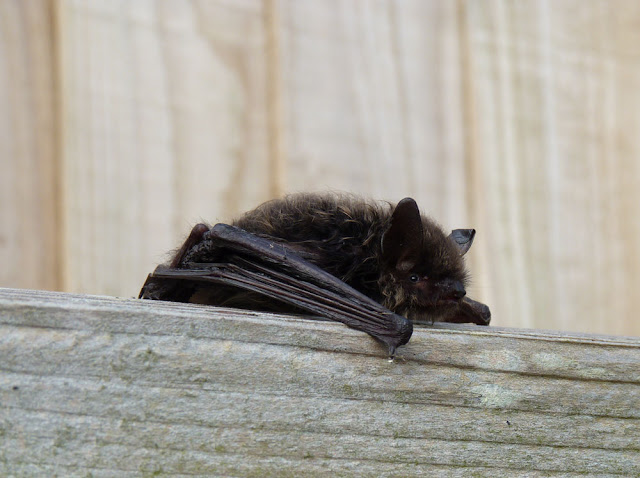 I went to pick it up so I could take it to Seaton's Bat Woman - but as I went for it it took off and started flying about again!  It's clearly not right though. Anyone know what species it is?

Hope to nip out again this afternoon - when maybe I'll have more luck with summer migrants??
Posted by Steve Waite at 12:44