Birding With A Beard

An unusual post title I know, but it is true! Well it was before I had to sort myself out for work today!

I shall start with yesterday's news, but I'll keep it brief cuz I've got no photos to pad it out with..

I saw and heard my first Willow Warbler singing at the entrance to Manor Farm, I just wish the superb Siberian Chiffchaff I was watching at Colyford WTW mid morning was just as vocal - but it didn't even peep! There was another pale Chiffy here too but not as striking as this particular individual. A Ringed Plover was the best of the selection on the river.

My second year tick of the day came during a ringing session at Colyford Marsh in the evening. As we walked across the marsh a Little Ringed Plover got up and flew south - nice! It returned later as we could hear it calling after dark. There was a nice flock of 60 Sand Martins here too with a few Swallows. We netted five Black-tailed Godwits, three Curlew and three Redshank, well worth the midnight finish! A grey goose flew over calling at about 23:45, which was annoying, and a few Redwing could be heard overhead.

Now to today, and I was out at dawn in the hope that my grey goose was still in the area - but it wasn't! The weather looked promising though... 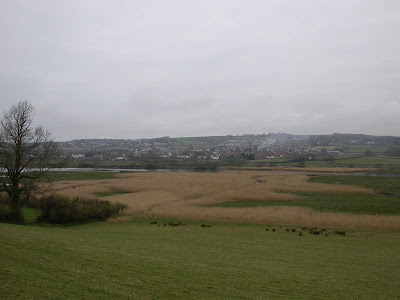 Low cloud and no wind.... almost perfect!
Willow Warblers were singing almost everywhere I went, with five in the Borrow Pit on Seaton Marshes. Hirrundines were everywhere, a flock of 160 Sand Martins over Bridge Marsh included at least three Swallows and my first House Martin of the year. Two more House Martins were over Colyford Marsh about 15 minutes later and there must have been another 100-150 Sand Martins in the lower valley too (Seaton and Blackhole Marshes). Impressive stuff!

Back to Bridge Marsh where my first two White Wagtails of the spring were showing well but distantly, and on Colyford Marsh, there were now TWO Little Ringed Plovers... 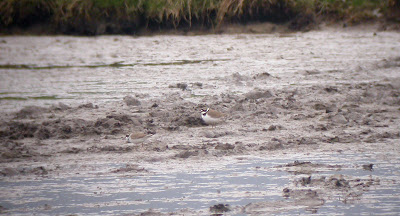 They always stayed on the far side of the scrape though!
So how is 'birding with a beard'? Well, I had a good few days birding, shaved it off at 12:30, today, and at c14:30 missed an Osprey fly up the valley (whilst I was sorting out a refund at the tills!) and another/the same one again at 17:30.

I can therefore proclaim that you are more likely to see decent birds if you have a beard.... I think I need to go to sleep!!!
Posted by Steve Waite at 22:35