... 'til the floodgates open and migrants start pouring in, but in the meantime we have the month called March.

Every birder in Britain goes out day after day during this month with summer migrants on their mind, but often every birder actually sees very little and by the end of the day realises what a pants day they've had! SOME years March can be superb - especially the latter half of it - it all depends on the weather.

That is reflected on the patch, we've had some great birds in March (Night Heron, White Stork, Snow Bunting, etc...), but little else.... It can be a month of lots of leg work for little reward. If the first four days are anything to go by then I don't hold out much hope for this year's 'month of anticipation'!

I haven't had much time out over the past couple of days but it does seem to be a little 'flat'. Monday I went to Branscombe early on, it was lovely - but the sea was a little too lumpy. 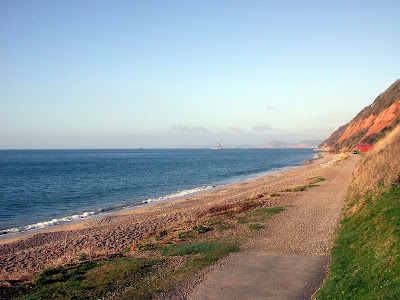 If you look closely you will see there's a boat where that Napoli was - GO AWAY!
The Red-necked Grebe that transformed me into an animated cartoon tiger last week was again showing, though appeared to be even more distant. Other than a couple of Red-throated Divers it was all quiet. Monday also gave me a chance to take a photo of our Black-tailed Godwit flock... so I did... 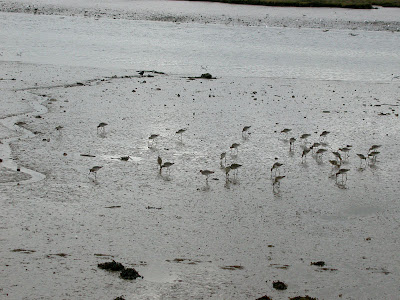 Well most of them anyway!
This morning we were hoping to catch some ducks on Seaton Marshes - but failed miserably! Later on in the morning, a look through the small collection of gulls on the river revealed the dark Iceland Gull still. 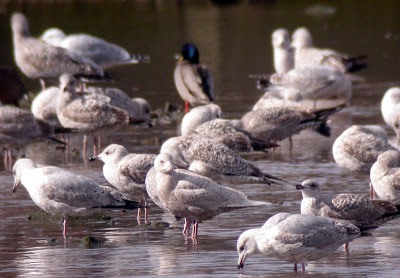 It still has a dodgy left eye
Hopefully my next post will contain photos of several local patch goodies (which aren't Iceland Gulls)... I DO hope so....
Posted by Steve Waite at 12:10