It's time I revealed all.... why have I been so desperate to see EVERY bird we've had this year???

This year I am going to try and beat the previous year list record, which I set in 2007 with a total of 197 species. 2007 was one of our best years EVER, with countless BB rares (NOT just Cattle Egrets!) and nearly every species of Gull that has ever been recorded in the Western Pal, well... nearlyish...

Last year I think Karen saw the most species, 188. On this date last year she had seen 125.... today I'm on 131, so I'm more than happy with that! The patch year list in total is on 136, meaning so far I am missing five. Three of these I'm not worried about, Swallow will fall in days, Balearic Shearwater probably within a couple of months and I see (on average) between three and seven Merlins a year. Marsh Harrier is a little worrying.... but Hawfinch is the big bogey, unless I jam an autumn fly-over I can't see me clawing that one back!

This year, a lot of my mornings during spring and autumn will be spent ringing in Beer (more about this in another post at a later date). Hopefully this will give me some patch goodies (even the likes of Garden Warbler, Pied Fly... etc), but I will surely miss one or two ticks by being here. I'm not worried about sea birds so much, as (on the whole) good conditions for these are bad conditions for ringing! Anyway, that's my waffling over with, what have I see today?

One year tick this morning, with a Cetti's Warbler singing at Colyford Common. It was full of birds here, with an impressive seven Green Sands (six on scrape and one on wet reedbed). Where are they coming from? It must be too early for spring migrants, so I guess they have been wintering somewhere else locally and have heard about this great new habbo! Also the male Ruff still, seven Dunlin, six Blackwits with a Wheatear and Sand Martin adding to the enjoyment!

Later on, a sweep of the river - which yesterday produced our first Ringed Plover of the year - revealed two Iceland Gulls, adding a nice touch of 'winter' to this very summer-like weather. They were in a very small group of large Gulls north of Coronation Corner. 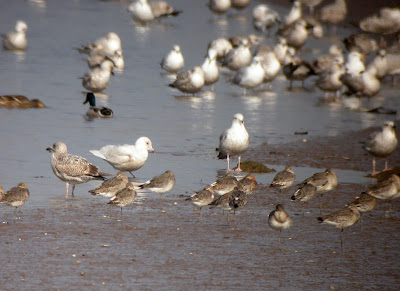 Lots of birds in this photo! 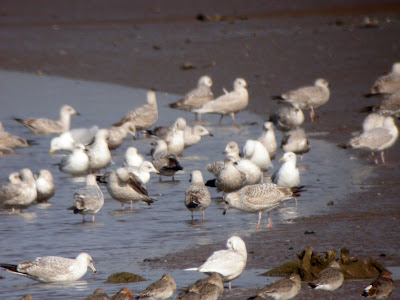 And two Iceland Gulls in this one! (also doesn't that first winter Herring-type look interesting, the one stretching forward in front of the rear Iceland...)
Early start tomorrow, am giving Branscombe a visit....off to bed for me....
Posted by Steve Waite at 22:47