Sorry for the recent quietness - but it is March.... say no more!

As the title suggests I've finally seen a hint of spring, with a couple of Sand Martins tonight during a farm gate vigil. They flew pretty hastily up river at 17:45 but were still much appreciated, my second year tick of the day - yes - SECOND! Which brings me back to 9am....

With the recent run of Crossbill sightings on Trinity Hill - well a report of six here on Friday - I picked Karen up and we headed up off to the top. Little did I know Karen was soon to reveal a HUGE GRIPPER - she'd seen them here yesterday!!!! Still, although at first it all looked grim, an eruption of 'chups' was music to my ears : ). Also lots of Siskins up here, including a couple of singing males.

We came back via the estuary where the Pale-bellied Brent Goose was on show by the tram sheds. This is the first time I've seen him on the estuary, I think he's just been on Colyford Marsh ever since Ian M found him last week. As you can see he is colour-ringed, I am awaiting details, you can also see how grubby he looks! Incidentally if you do recognise this ring combination, please let me know and post a reply! 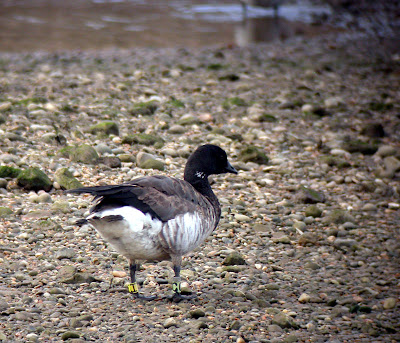 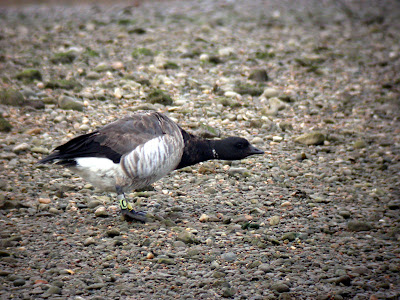 Here he is telling a Herring Gull (just out of shot) to go away!
Have spent lots of time scanning the Gulls this afternoon, where I met Gav - we spoke about how our Iceland Gulls have appeared to have gone. About two hours later, by the tram sheds, I came across this.... 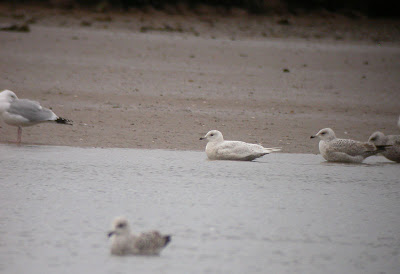 I spent 16:50 - 18:10 watching the upper river valley from the farm gate. I've already mentioned the two Sand Martins but there were a couple of other highlights too. At 17:02 an Iceland Gull came down the valley with a small group of Herring Gulls, it appeared to have come in from the Colyton direction - so we do have at least two still! Also a drake Gadwall floated down the river and 27 Little Egrets flew to roost.

I haven't posted since we had a surprise snow storm during one night last week, so here's a few snaps... 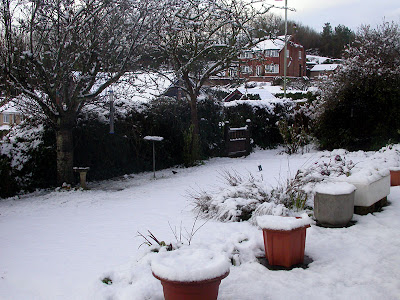 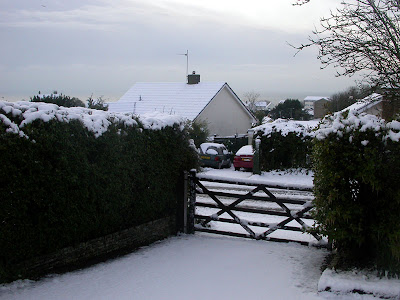 Looking down the drive 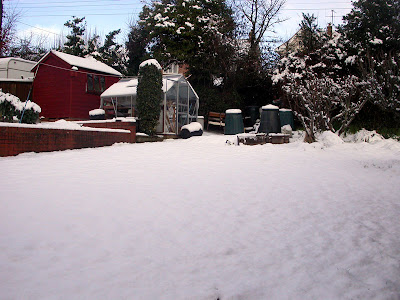 The back garden
Finally I just MUST share with you this picture which almost made me fall off my chair this morning! We've had Ring-billed Gull on the estuary in the past two Marchs - two in March 2007 in fact! I hope we have one this March too! This photo makes me want one EVEN MORE, simply stunning photo Ronan, who said Gulls aren't attractive? Please take a look....