It's over a week late, but I just have to blog about this...

Tuesday 30th June was my last day of Furlough, and feeling like I needed to make the most of it I bundled the family into the car and drove to Dartmoor.  This was despite the absolutely grim weather - I just had an urge to go!

Our picnic near Warren House Inn was something to be forgotten about.  Wind and rain meant we had to stay in the car, and the fog ensured the usual stunning views were not in view at all.  With spirits low I suggested Fernworthy Reservoir as out next port of call, somewhere that has always been a favourite of mine, being the source of so many happy birding memories.

Arriving in the carpark it was nice to see the weather was a little less less grim here.  Drizzle and poor visibility yes, but you could still see the far side of the Res and we had managed to escape the wind.

Within about three seconds of stepping out of the car I proved this was indeed an excellent choice of destination.  Before I'd even had chance to shut my car door, in nearby scrub I could hear...

Willow Tit!  Although a species I haven't heard for about fifteen years, there was no mistaking that scolding-buzzy chur!

I can't lie, I instantly abandoned the family and legged it towards the call!  It took me a few minutes to track it down, but there, feeding on the inside of young willow tree (how apt!) was a super gorgeous and extremely cute young Willow Tit!  It still had that 'fluffy-headed' appearance of a youngster, and seemed to have not fully grown its tail.  WHAT A TREAT.

After about five minutes of some super views, paired with frequent calling (which sometimes included a high pitch 'pi' in front on the buzzy notes), it flew out the back of the willow and away from the path.  For the next few minutes I could hear its calls getting quieter and quieter.

Was I annoyed I didn't have my Nikon P900 with me?  Well no actually.  It's so easy to fluff up a fast moving small bird in a densely leaved tree, and I have wasted many minutes doing this (especially warblers!).  But because I didn't even have my camera with me, I just watched it.   As it was becoming more distant I suddenly thought I should get some sort of 'proof', so I reached for my phone.  Turn your volume to the max and mute all other sounds, then you may just about hear it two seconds into this video clip...


There's a few reasons why this was SO exciting for me...

We don't get Willow Tits in East Devon, and having not been anywhere where Willow Tits occur for so long, this was literally my first Willow Tit since I was in my late teens!

Fernworthy was actually the site of my first ever Willow Tit.  I remember birding here with Dad in the late 90's after being told they had been seen in the vicinity.  Having never seen one before I just didn't know what to expect with my first Willow Tit, as I'd read on so many occasions how difficult they were to separate from Marsh Tit.  But I will never forget walking around the far south west corner of the Res and clapping eyes on a black-cap tit that basically shocked me at how obviously Willow it was!  It's thick and almost hunched in neck along with a broad pale wing bar were just so striking it had a completely different look to any Marsh Tit I'd ever seen.  Even the way it moved felt different to a Marsh to me.

Although Fernworthy was the site of my first, I also knew this was basically a historic site for this species.  So to see a recently fledged young bird here is a significant find. An honour to find.

And finally... well they are just such a rare bird!  Estimates are they've suffered a 79% UK decline since the late 80's, and in Devon their distribution appears to be similarly shrinking with the north west corner of the county (Roadford and Tamer Lakes and Hartland Forest) being their last strong hold.  Although how many pairs are actually still there I don't know, does anyone?  Am sure there's still the odd pair tucked away on Dartmoor, as this little one basically proves, but there can't be many left. Am pretty sure they no longer occur in Cornwall or Dorset, and maybe even Somerset?

And as if this little one wasn't enough, the whole time we were there Crossbills were 'chupping' away. At least thirty surrounded us in the trees near the carpark and dam, and at one point there was an ferocious explosion of Crossbill calls emanating from the far bank - sounded like an absolute monster flock taking flight! Was nice to see a singing Tree Pipit too along with some fresh lemon yellow young Willow Warblers.  And I couldn't not appreciate the lovely Heath Spotted Orchids in flower... 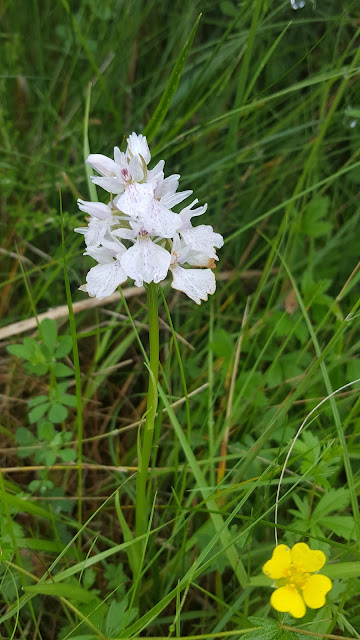 If you ever needed proof Dartmoor isn't just a fair weather destination, take this blog post as it.